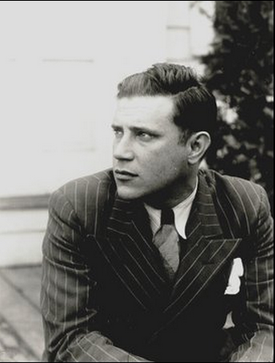 Jesse Stuart (1906 - 1984) was an American author whose writing was informed and inspired by his upbringing in rural Northeastern Kentucky. Stuart was a teacher and school administrator who wrote short stories, poetry, and novels, many of which had educational themes. He won the Guggenheim Award in 1937 and Kentucky's Poet Laureate in 1954. Stuart published 703 sonnets in his collection, Man with a Bull-Tongue Plow (1934), which was praised as the best American poetry since Walt Whitman published Leaves of Grass (1855).

Stuart wrote about 460 short stories. The Split Cherry Tree, published in Esquire in 1934, is his most anthologized short story, appearing in numerous collections of notable authors and widely read by U.S. high school students. The three main characters -- a teacher, a boy (Dave), and the boy's father -- must resolve a dilemma that occurs after Dave's punishment at school interferes with his ability to do his chores at his homestead. Though it is not yet in the public domain, American Literature offers a summary of Stuart's story, which we hope our readers enjoy.