John Dos Passos (1896 - 1970) was an American novelist, artist, and served in World War I in the American Volunteer Motor Ambulance Corps (Paris), and the US Army Medical Corps (Italy). Following the War, he wrote Three Soldiers (1921), about which H.L. Mencken remarked in Smart Set (1922):
"It changed the whole tone of American opinion about the war; it even changed the recollections of actual veterans of the war. They saw, no doubt, substantially what Dos Passos saw, but it took his bold realism to disentangle their recollections from the prevailing buncombe and sentimentality." 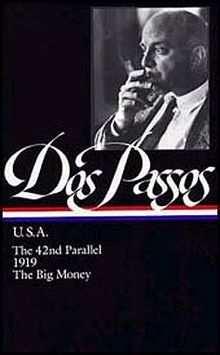 Manhattan Transfer (1925) was Dos Passos' first commercial success. He went to the Soviet Union to study socialism, became involved in the communist-leaning League of American Writers. He was in Spain in 1937 during the Spanish Civil War, which soured his belief in communism. Later in his life he would make a dramatic political change, supporting Barry Goldwater and Richard Nixon.