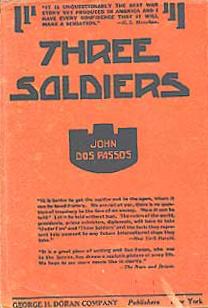 Three Soldiers (1921) was written by an author who was in the midst of the blood and guts of war. Dos Passos used bold realism to describe his experiences as an ambulance driver and in the Army Medical Corps during World War I. H.L. Mencken wrote about the book: "It changed the whole tone of American opinion about the war; it even changed the recollection of actual veterans of the war...it took bold realism to disentangle their recollections from the prevailing buncombe and sentimentality."

Dos Passos weaves life and death throughout his work, like a soldier stopping to admire the eyes of a frog in a puddle while his unit marches ahead, or as in the end of Part Four: "Birds were singing among the budding trees. The young grass by the roadside kept the marks of the soldiers’ bodies.

Featured in our collection of World War I Literature

Translation: "Contemporaries who suffer from certain things can only remember it with a horror that paralyzes any other pleasure, even that of reading a tale."]

Part One: Making the Mold

Part Two: The Metal Cools I

Part Five: The World Outside

Part Six: Under the Wheels