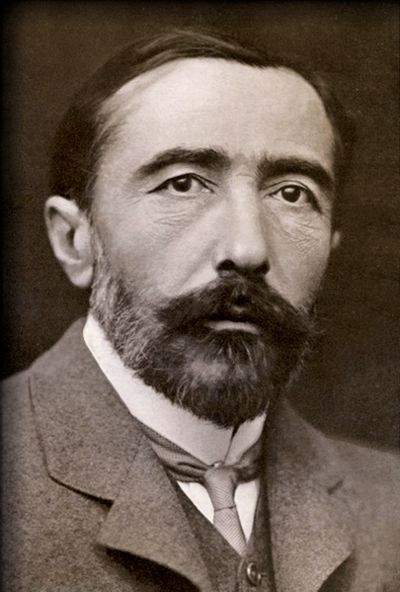 Joseph Conrad (1857 - 1924) was a Polish author who wrote in English. A feat made even more remarkable when we consider that he was not even fluent in English until he was in his twenties -- and even then he spoke with a heavy Polish accent. Conrad always thought of himself as a Pole, but since he was writing in English the literary world regarded him as a great English author -- reportedly to his consternation. He was granted British nationality in 1886 when he was 28.

His work is still widely read and studied in classrooms throughout the world. Many students are familiar with Heart of Darkness, and his short story, The Secret Sharer.

H.L. Mencken observed: "Like Dreiser, Conrad is forever fascinated by the 'immense indifference of things,' the tragic vanity of the blind groping that we call aspiration, the profound meaninglessness of life—fascinated, and left wondering."

You may enjoy reading H.L. Mencken's critical analysis of the author in A Book of Prefaces, titled Joseph Conrad.

Heart of Darkness
Lord Jim
Nostromo, a Tale of the Seaboard
The Secret Agent
Typhoon

Amy Foster
An Anarchist
An Outpost of Progress
Because of the Dollars
Falk: A Reminiscence
Gaspar Ruiz
Il Conde
Karain: A Memoir
The Brute
The Duel (A Military Tale)
The Idiots
The Informer
The Inn of the Two Witches - A Find
The Lagoon
The Partner
The Planter of Malata
The Return
The Secret Sharer
To-Morrow
Youth