Many people became familiar with Heart of Darkness through Francis Ford Coppola's famous movie adaptation, Apocalypse Now. The novel Heart of Darkness is largely based on first-hand experiences that Joseph Conrad acquired while journeying up the Congo River during a six month voyage in 1890. The captain died during that voyage and Conrad took command of the steamboat. Heart of Darkness details the journey of Charles Marlow as he captains a ferry-boat transporting ivory down river and develops an intense interest in Kurtz, an ivory procurement agent stationed in the territory. A great classic of English literature, a must-read from the Novels Library at American Literature.

The image is the cover of Blackwood's Magazine, where Heart of Darkness was serialized in three parts starting in February 1899. It was published as a novel in 1902. 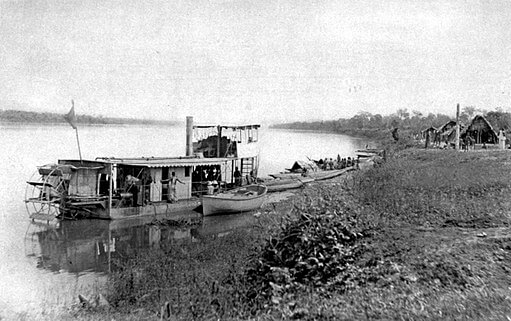 Return to the Joseph Conrad library.