Kahlil Gibran (1883 - 1931) was a Lebanese-American poet and author who considered himself primarily an artist (the Arabic spelling of his name is Khalil Gibran). Best known for his book, The Prophet (which just became available in the public domain on January 1, 2019), he lived most of his life in the United States and published his best known work in English. [Painting at right: self portrait with muse, 1911; below: drawing from "The Farewell" in The Prophet, 1923.] 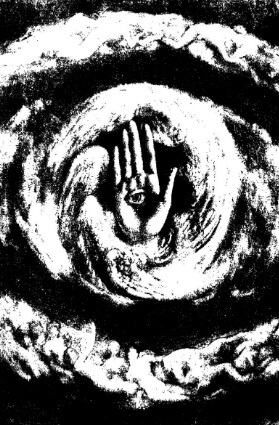 Gibran attended art school in Paris and became an accomplished artist, particularly in watercolor and drawing. He embraced the romantic and symbolist style, rather than the emerging popularity of realismDuring his first exhibition of drawings in Boston in 1904, he happened upon a life-changing friendship with the accomplished author, Mary Elizabeth Haskell. Haskell supported Gibran financially and edited all of his works in English starting in 1918, before then he published in Arabic.