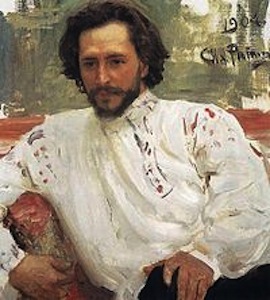 Leonid Nikolayevich Andreyev (1872 - 1919) was a Russian playwright, novelist and short story writer (1871 - 1919), considered the father of Russian Expressionism. His work is representative of the styles of Realism and Naturalism. One of his best known stories is a ghost story, titled Lazarus, published in 1906.

Andreyev was born in Oryol, Russia into a middle class family of Polish, Finnish, and Latvian descent. He studied law in Moscow and St. Petersburg, then became a police-court reporter for a Moscow newspaper. He wrote poetry as a hobby, getting nothing published until his first short story in 1889, Bargamot and Garaska. Russian literary legend, Maxim Gorky was impressed with his early work, and recommended that Andreyev concentrate on writing literature full-time.

Andreyev quickly gained fame after his first short story collection was published in 1901. Many of his works focused on the psychological aspects of his characters, and a dramatic treatment of sex for the era. Andreyev got involved in political debates as the defender of democratic ideals during the Russian Revolution. Stories that typified the spirit of this period of political turmoil include The Red Laugh (1905), Governor (1905) and The Seven That Were Hanged (1908).

Andreyev wrote many plays beginning in 1905; one of the most widely performed and popular in 20th century Russia was his work, The Life of Man (1906).

"Wisdom and folly are equal before the face of Infinity, for Infinity knows them not." (from Lazarus, 1906)

Andreyev is featured in our favorite Russian Writers

A Story Which Will Never Be Finished
Lazarus
Love, Faith and Hope
On The Day of the Crucifixion
The Crushed Flower
The Little Angel
The Red Laugh
The Serpent's Story
The Seven That Were Hanged