Livingston York Yourtee "Hop" Hopkins (1846 – 1927) was an American cartoonist, whose works include A Comic History of the United States (1876) and a forerunner to one of our favorite graphic historian illustrators, Larry Gonick, who conveys important historic milestones and scientific concepts in a memorable, visually effective medium. Hopkins became a popular cartoonist in Australia, credited with one of the earliest newspaper comic strips, Professor Tigwissel's Burglar Alarm. 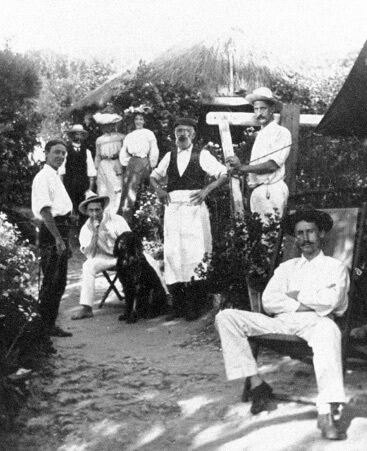 Hopkins was thirteenth of fourteen siblings from Bellafontaine, Ohio, puritanical upbringing included work after being schooled until 14, then served briefly in the Civil War for the 130th Ohio Regiment. After the war, he illustrated stories for the Toledo Blade, before being published in Scribner's Weekly, Judge and the New York Daily Graphic. After publishing A Comic History of the United States in 1867, he spent several years freelancing, often for Punch and other political cartoon outlets.

Hopkins moved his family to Sydney, Australia in 1883, and worked for The Bulletin until 1913. His most popular character, Little Boy from Manly was published in April 1885. After retirement, Hopkins enjoyed gardening, playing music, making violins, and lawn bowling, before his death in 1927.