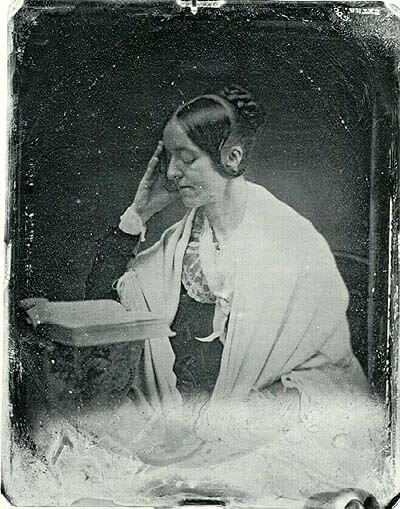 Margaret Fuller (1810 - 1850) was a feminist, journalist, literary critic, and women's rights advocate, who gained the distinction of being the best-read person in New England (man or woman) in the 1840s, gaining access to Harvard's library as the first woman to do so. She wrote the first American feminist book, Woman in the Nineteenth Century, published in 1845. In it, she examined the differences between men and women and advocated for the need for women to have their educational and spiritual resources strengthened. "There is no wholly masculine man, no purely feminine woman." She concluded that both sexes share feminine and masculine qualities, the differences lie in the individual. While Mary Wollstonecraft is considered the "Mother of Feminism" with her landmark book, A Vindication of the Rights of Woman, Fuller gained that distinction as the first American feminist. She is also considered a member of the Transcendental Movement.

Fuller went to Europe in 1844 as the New York Tribune's first female correspondent, becoming involved in the revolutions in Italy. Tragically, on her return boat trip to the United States in 1850, Fuller, her partner, Giovanni Ossoli, and their child drowned off of Fire Island, New York; their bodies were never recovered.

Visit our Feminist Literature Study Guide and Transcendentalism Study Guide for background on other featured authors and their works in these genres.

Woman in the Nineteenth Century

Lines Written in March, 1836
Summer on the Lakes
To a Friend