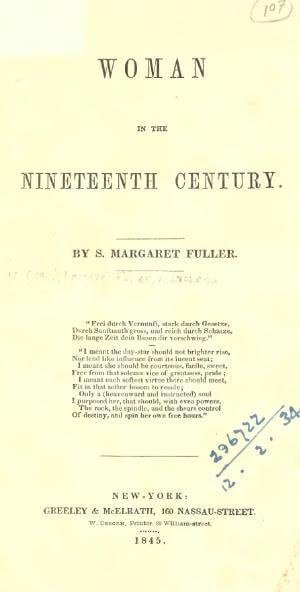 Woman in the Nineteenth Century

Woman in the Nineteenth Century (1845) is considered the first major work of feminism in the United States. It was originally published in shorter form in The Dial magazine, titled The Great Lawsuit. Man versus Men. Woman versus Women in July, 1843. The book is subtitled, Kindred Papers Relating to the Sphere, Condition and Duties, of Woman. In it, Fuller examined the differences between men and women and advocated for women's need to have their educational and spiritual resources strengthened ("Educate Men and Women as Souls" is one of her chapters). "There is no wholly masculine man, no purely feminine woman." She concluded that both sexes share feminine and masculine qualities and that the differences lie in the individual. The Introduction is written by Horace Greeley, Fuller's editor who sent her to Europe as The New York Tribune's first female correspondent, who praised Fuller as "one of the earliest as well as ablest among American women, to demand for her sex equality...Her writings on this subject have the force which springs from the ripening of profound reflection into assured conviction."

Visit our Feminist Literature Study Guide for background on other important authors and their writings.

Preface by Arthur B. Fuller

Part I - Woman in the Nineteenth Century

From a Criticism on "Consuelo"

Ellen: Or, Forgive and Forget

On Books of Travel

Review of "Memoirs and Essays of Mrs. Jameson"

Woman's Influence Over the Insane

From a Criticism on Browning's Poems

Educate Men and Women as Souls

To Her Brother, R.

To Mazzini and To Mr. and Mrs. Spring

Return to the Margaret Fuller library.