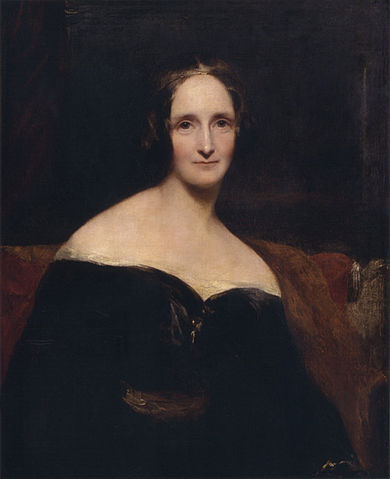 Mary Wollstonecraft Godwin (1797 - 1851), who became known as Mary Shelley, is most recognized for her gothic novel, Frankenstein (1818). Her mother was the prominent feminist and philosopher, Mary Wollstonecraft, who died eleven days after her daughter was born. Mary was educated by her father, a liberal political philosopher, and then she fell in love with one of his followers, the romantic poet, Percy Bysshe Shelley. There was plenty of scandal: he was married, Mary became pregnant, then they left for France. The scandal turned tragic when their premature, out-of-wedlock daughter died and Percy's first wife committed suicide. Percy and Mary married in 1816, but were ostracized in French society and burdened by debts.

The Shelleys moved to Geneva, where Mary developed the idea for her famous novel, Frankenstein, while houseguests of the renowned poet, Lord Byron. Tragedy struck yet again, after they moved to Italy in 1818, when two of their children died. Mary gave birth to one surviving child, Percy Florence, whom she dedicated to raising back in England while pursuing her professional writing career. Tragedy was endemic to Mary's life and influenced her works' exploration of death. Percy died in a sailing accident and she became chronically ill, dying of a brain tumor when she was just 53 years old.

Shelley's collection of short stories, though not as well known as her famous novel, offer many clever and tragic tales involving the supernatural. We feature her work in our collections: Gothic, Ghost, Horror & Weird Library, Halloween Stories, and Short Stories for High School. Her work is also referenced in our Gothic Literature Study Guide.

"If I cannot inspire love, I will cause fear!"