An Episode of Cathedral History
A School Story
Canon Alberic's Scrap-Book
Casting the Runes
Count Magnus
Lost Hearts
Martin's Close
Mr Humphreys and his Inheritance
Number 13
'Oh, Whistle, and I'll Come to You My Lad'
The Ash-tree
The Diary of Mr. Poynter
The Mezzotint
The Residence at Whitminster
The Rose Garden
The Stalls of Barchester Cathedral
The Story of a Disappearance and an Appearance
The Tractate Middoth
The Treasure of Abbot Thomas
Two Doctors

Best known for his ghost stories, M.R. James invigorated the genre by using more realistic and contemporary settings than his predecessors. He is known as the originator of the "antiquarian ghost story." James published his first collection, Ghost Stories of an Antiquary, in 1904. Most of our favorite stories featured here are from this collection. 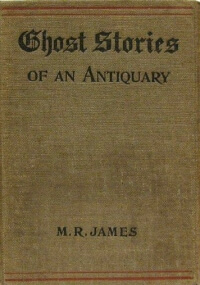 Although he is famous for his ghost stories, M.R. James was a formidable scholar and his medieval scholarship is still held in high regard in today's academic circles.

James is featured in our Gothic Literature Study Guide Enjoy many of his stories, along with plenty of other spooky tales in our collections, Gothic, Ghost, Horror & Weird Library and Halloween Stories