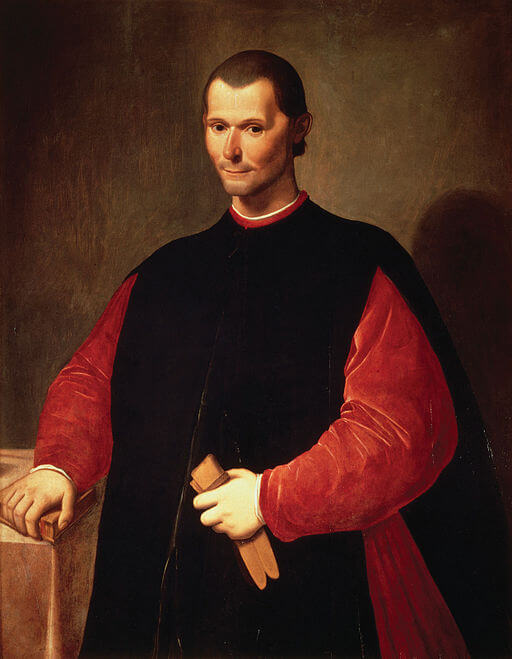 Niccolo Machiavelli (1469 - 1527) was a Florentine Renaissance historian, diplomat and author, best known for crafting The Prince and credited with founding modern political theory. His literary and cultural mark is deep across many cultures; the term Machiavellianism means "the employment of cunning and duplicity in statecraft or in general conduct."

Machiavelli witnessed the fall of the Medici family, which had been the cornerstone of absolute power in Italy, after the French invasion of 1493. He served on numerous missions to heads of state, including Emperor Maximilian and several to the French. Machiavelli became secretary of the Ten from 1498 to 1512, when the Republic fell. He wrote Affairs of France and Germany, providing far-reaching insights into necessary structures of power and governance. Machiavelli was charged with conspiracy for the downfall of his mentor, Gonfaloniere Soderini, and tortured in 1513, after the Medici Family was restored to power. Machiavelli was acquitted, but retired to writing literature soon thereafter. In 1519, Leo X commissioned him to propose reforms for Florence, and he was a diplomat and historiographer before the French were defeated and Italy was invaded by Emperor Charles V. The Medicis were again driven out in 1527, Italy declared a Republic, but Machiavelli died without being able to participate in this liberation.

The Prince (1532) and his other writings were perceived as threatening and diabolical, particularly by the clergy. He advocated using all means to establish and preserve authority, which is where "the end justifies the means" comes from. Machiavelli's philosophy continues to be misrepresented and misunderstood, used to excuse criminal wrongdoings that would probably make him roll over in his grave. Machiavelli took great measure to counsel princes how to avoid being despised and hated, and to seek to gain renown. As in Chapter XIX: "It makes him contemptible to be considered fickle, frivolous, effeminate, mean-spirited, irresolute, from all of which a prince should guard himself as from a rock; and he should endeavour to show in his actions greatness, courage, gravity, and fortitude; and in his private dealings with his subjects let him show that his judgments are irrevocable, and maintain himself in such reputation that no one can hope either to deceive him or to get round him."

It wasn't until 1782 that the first great edition of his works was published, at which time he gained a steady following as the founder of political science. Among his admirers, Alexander Hamilton, America's founding father perhaps most responsible for establishing the government's framework, studied and was influenced by Machiavelli early in his education. Acclaimed science fiction author, H.G. Wells, tests his political theories in the novel, The New Machiavelli (1910). Enduring Machiavelli quotes include:

"The first method for estimating the intelligence of a ruler is to look at the men he has around him."
"Since love and fear can hardly exist together, if we must choose between them, it is far safer to be feared than loved."