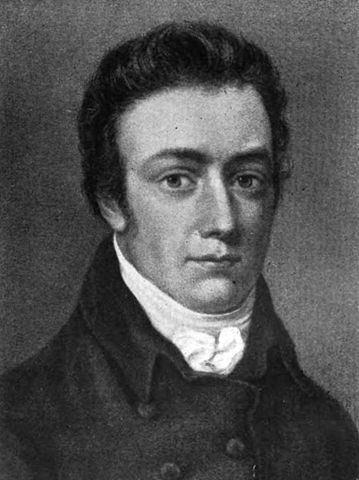 Samuel Taylor Coleridge (1772 - 1834) was a poet and philosopher best known for his epic poems, The Rime of the Ancient Mariner (1798) and Kubla Khan (1816). The well-known metaphor: having an "albatross around one's neck" and the oft-quoted: "Water, water everywhere, nor any drop to drink" (often misquoted as: "but not a drop to drink") are derived from Coleridge's mariner poem, though many who know of the albatross don't know its source.

In addition to his lengthy, well-known poems, Coleridge wrote a lovely collection of what came to be called "conversation poems," a group of eight poems including The Nightingale: A Conversation Poem (1798) and Frost at Midnight (1798). Described as "blank verse," critics regarded this collection as some of his finest verses, being taken as "merely talk," as natural as prose, yet as artful as a sonnet. Coleridge, along with William Wordsworth marked the beginning of the Romantic movement of English literature with their collaborative works, Lyrical Ballads, With a Few Other Poems (1798). Coleridge's daughter, Sara Coleridge was a poet and translator.

Anecdote for Fathers
Fears in Solitude
Frost at Midnight
Kubla Khan: or A Vision in a Dream
Lines Written in Early Spring
The Nightingale, a Conversational Poem
The Rime of the Ancient Mariner
The Thorn
This Lime-Tree Bower My Prison
To William Wordsworth