Kubla Khan: or A Vision in a Dream

Coleridge's best-known poems are The Rime of the Ancient Mariner (1798) and Kubla Khan: or A Vision in a Dream, which was composed one night in 1797, after waking from an opium-stupor. He describes Xanadu, the summer palace of the Mongol ruler and Emperor of China, Kublai Khan, or Shizu, founder of the Yuan Dynasty. He published it in 1816, after encouragement from his friend, Lord Byron. It took critics years before it was openly admired. Read about the history of Kublai Khan, grandson of Genghis Khan. 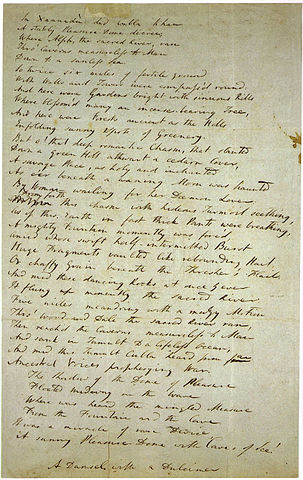 This poem is featured in our selection of 100 Great Poems.

First published together with Christabel and The Pains of Sleep, 1816: included in 1828, 1829, and 1834. [295:2] There can be little doubt that Coleridge should have written 'the summer of 1798'. In an unpublished MS. note dated November 3, 1810, he connects the retirement between 'Linton and Porlock' and a recourse to opium with his quarrel with Charles Lloyd, and consequent distress of mind. That quarrel was at its height in May 1798. He alludes to distress of mind arising from 'calumny and ingratitude from men who have been fostered in the bosom of my confidence' in a letter to J. P. Estlin, dated May 14, 1798; and, in a letter to Charles Lamb, dated [Spring] 1798, he enlarges on his quarrel with Lloyd and quotes from Lloyd's novel of Edmund Oliver which was published in 1798. See Letters of Samuel Taylor Coleridge, 1895, i. 245, note 1. I discovered and read for the first time the unpublished note of November 3, 1810, whilst the edition of 1893 was in the press, and in a footnote to p. xlii of his Introduction the editor, J. D. Campbell, explains that it is too late to alter the position and date of Kubla Khan, but accepts the later date (May, 1798) on the evidence of the MS. note. [296:1] 'In Xamdu did Cublai Can build a stately Palace, encompassing sixteene miles of plaine ground with a wall, wherein are fertile Meddowes, pleasant Springs, delightfull Streames, and all sorts of beasts of chase and game, and in the middest thereof a sumptuous house of pleasure.'—Purchas his Pilgrimage: Lond. fol. 1626, Bk. IV, chap. xiii, p. 418.

'I'll mark thy "sunny domes" and view Thy "caves of ice", and "fields of dew".' It is possible that she had seen a MS. copy of Kubla Khan containing these variants from the text.

Add Kubla Khan: or A Vision in a Dream to your library.

Return to the Samuel Taylor Coleridge library , or . . . Read the next poem; Lines Written in Early Spring