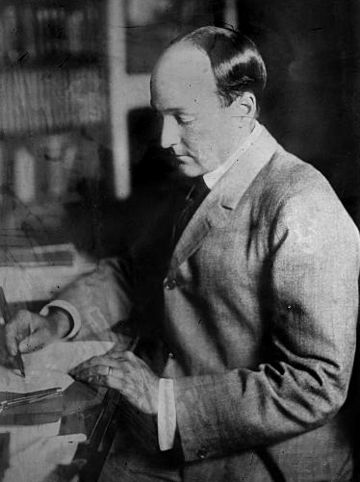 Stewart Edward White (1873 - 1946) was an American author and spiritualist whose writing focused on nature and human nature at a time when America was starting to lose its vast wilderness. He wrote Westerns, camping journals, outdoor adventure fiction that incorporated historical details about the California gold rush, fur trading, and pioneers who passed through or settled in rugged country. His writing style with pithy, plain-spoken, and he enjoyed describing details about hunting, fishing, cabin-building, logging, guns, and other wilderness survival skills. He had a spiritual side as well. Between 1920-1922, he and his wife, Elizabeth Betty" Grant White, co-authored numerous books based on "channelling with spirits."

White grew up in Grand Rapids, Michigan, where he loved outdoor living and natural history. He incorporated his skills and experiences in his works. Theodore Roosevelt complimented White as: "the best man with both pistol and rifle who ever shot" at Roosevelt's Sagamore Hill rifle range.

Following Davy Crockett's popularity on The Wonderful World of Disney, the company decided to adapt White's short stories involving Daniel Boone for television. Though they weren't as popular as Davy Crocket, White's The Saga of Andy Burnett (1947) was one of his legacies. Its four stories are:
The Long Rifle (1930)
Folded Hills (1932)
Ranchero (1933)
Stampede (1942)

One of White's short stories, "The Girl Who Got Rattled," inspired an episode in a 2018 movie entitled The Ballad of Buster Scruggs by the Coen brothers.

White died in Hillsborough, California in 1946, a remembered voice in the wilderness.