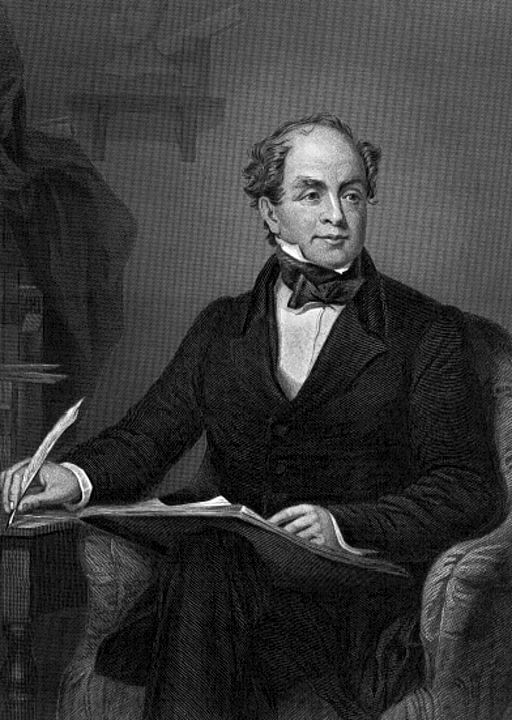 Thomas Moore (1779 - 1852) was an Irish poet, singer, songwriter, and "balladeer" (an infrequently used title), best known for his ten volume collection, Irish Melodies (1807-34), often simply referred to as Moore's Melodies. His most popular verses include The Minstrel Boy and The Last Rose of Summer (1805).

Moore showed early interest and ability in music and the performing arts, acquired an English accent that he never lost at the English Grammar School in Dublin. Moore attended Trinity College during the turmoil following the French Revolution, and rather than become a lawyer, achieved immense popularity for writing and singing the lyrics for Believe Me, if All Those Endearing Young Charms, The Meeting of the Waters, and The Harp That Once Through Tara's Halls. The Minstrel Boy was a tribute to many of his classmates who died in the French-backed Irish Rebellion of 1798, though Moore did not fight. The song was adapted and revived during the American Civil War and also during World War I. More recently, it enjoyed a spotlight in the Star Trek series in the later 20th century.

In addition to his reputation producing long, flowery poems (considering his ten volume collection comprised 136 poems, those are some epic works!), Moore gained notoriety for being involved in burning the personal memoirs of Lord Byron. Byron, though derisive of Moore's work as "leadless pistols," trusted him to serve as literary executor and publish Byron's memoirs after death. In what's considered one of the great literary tragedies of the ages, the publishing house, John Murray, and Byron's family outvoted Moore in their decision to destroy, rather than publish Byron's memoirs, which they decided would only serve to further destroy Byron's reputation. Alas, the world will never know their contents.

We like Edgar Allan Poe's reference to Moore's works in The Poetic Principle, Poe's brilliant description of poetry elements, including whether poems are allowed to be short, and a critique of various works. We feature Moore's well-known lyrics, The Minstrel Boy in Civil War Poems.

Believe Me, If All Those Endearing Young Charms
Enigma
The Harp That Once Through Tara's Halls
The Last Rose of Summer
The Meeting of the Waters
The Minstrel Boy