The Vicissitudes of Civil War

Around him suddenly, from all directions, the thicket was filled with muskets, bayonets, and sabres, a tricolored banner was unfurled in the dim light, and the cry, "Lantenac!" burst forth on his ears, while at his feet through the brambles and branches savage faces appeared. 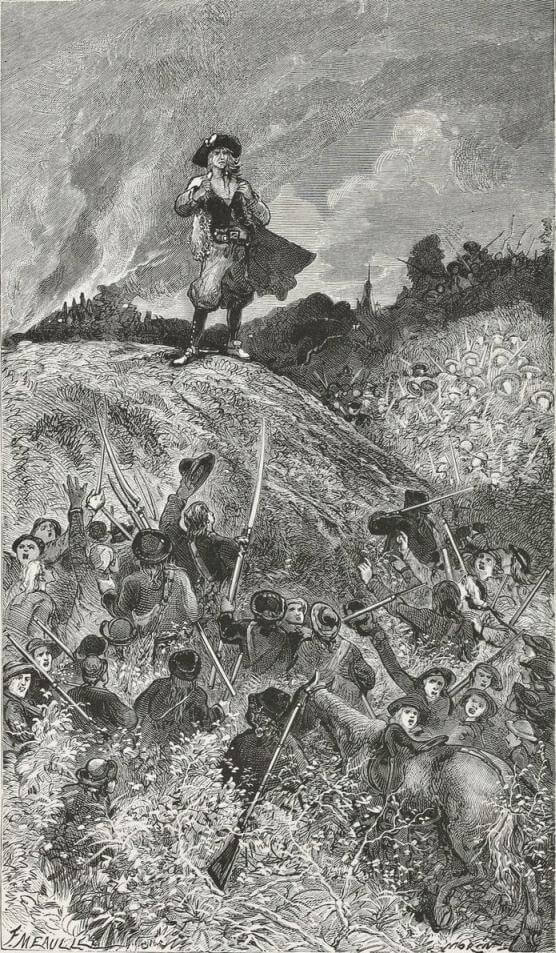 The Marquis was standing alone on the top of the height, visible from every part of the wood. He could scarcely distinguish those who shouted his name, but he could be seen by all. Had there been a thousand muskets in the wood, he offered them a target. He could distinguish nothing in the coppice, but the fiery eyes of all were directed upon him.

He took off his hat, turned back the brim, and drawing from his pocket a white cockade, he pulled out a long dry thorn from a furze-bush, with which he fastened the cockade to the brim of his hat, then replaced it on his head, the upturned brim revealing his forehead and the cockade, and in a loud voice, as though addressing the wide forest, he said:—

"I am the man you seek. I am the Marquis de Lantenac, Viscount de Fontenay, Breton Prince, Lieutenant-General of the armies of the king. Make an end of it. Aim! Fire!"

And opening with both hands his goat-skin waistcoat, he bared his breast.

Lowering his eyes to see the levelled guns, he beheld himself surrounded by kneeling men.

At the same time hats were thrown up and sabres whirled joyously, while from all sides brown woollen caps hoisted on long poles were waving in the air.

A Vendean band surrounded him.

At the sight of him they fell on their knees.

Legends tell us that the ancient Thuringian forests were inhabited by strange beings,—a race of giants, at once superior and inferior to men,—whom the Romans regarded as horrible beasts, and the Germans as divine incarnations, and who might chance to be exterminated or worshipped according to the race they encountered.

A sensation similar to that which may have been felt by one of those beings was experienced by the Marquis when, expecting to be treated like a monster, he was suddenly worshipped as a deity.

All those flashing eyes were fastened upon him with a kind of savage love.

The crowd were armed with guns, sabres, scythes, poles, and sticks. All wore large felt hats or brown caps, with white cockades, a profusion of rosaries and charms, wide breeches left open at the knee, jackets of skin, and leather gaiters; the calves of their legs were bare, and they wore their hair long; some looked fierce, but all had frank and open countenances.

A young man of noble bearing passed through the crowd of kneeling men and hastily approached the Marquis. He wore a felt hat with an upturned brim, a white cockade, and a skin jacket, like the peasants; but his hands were delicate and his linen was fine, and over his waistcoat was a white silk scarf, from which hung a sword with a golden hilt.

Having reached the hure, he threw aside his hat, unfastened his scarf, and kneeling, presented to the Marquis both scarf and sword.

"Indeed we were seeking for you," he said, "and we have found you. Receive the sword of command. These men are yours now. I was their commander; now am I promoted, since I become your soldier. Accept our devotion, my lord. General, give me your orders."

At a sign from him, men carrying the tricolored banner came forth from the woods, and going up to the Marquis, placed it at his feet. It was the one he had seen through the trees.

"General," said the young man who presented the sword and the scarf, "this is the flag which we took from the Blues who held the farm Herbe-en-Pail. My name is Gavard, my lord. I was with the Marquis de la Rouarie."

And calm and composed he girded on the scarf.

Then he pulled out his sword, and waving it above his head, he cried,—

"Rise! And long live the king!"

All started to their feet. Then from the depth of the woods arose a tumultuous and triumphant cry,—

The Marquis turned towards Gavard.

While they were descending the hill, the peasants clearing away the furze-bushes to make a path for the Marquis de Lantenac, Gavard continued:—

"All this may be explained in a word, my lord: nothing could be more simple. It needed but a spark. The republican placard in revealing your presence has roused the country for the king. Besides, we have been secretly notified by the mayor of Granville, who is one of us,—the same who saved the Abbé Ollivier. They rang the tocsin last night."

"And here we are," continued Gavard.

"And you number seven thousand?"

"To-day. But we shall be fifteen thousand to-morrow. It is the Breton contingent. When Monsieur Henri de la Rochejaquelein went to join the catholic army they sounded the tocsin, and in one night six parishes—Isernay, Corqueux, Échaubroignes, Aubiers, Sainte Aubin, and Nueil—sent him ten thousand men. They had no munitions of war, but having found at a quarryman's house sixty pounds of blasting-powder, Monsieur de la Rochejaquelein took his departure with that. We felt sure you must be somewhere in these woods, and we were looking for you."

"And you attacked the Blues at the farm Herbe-en-Pail?"

"The wind prevented them from hearing the tocsin, and they mistrusted nothing; the population of the hamlet, a set of clowns, received them well. This morning we invested the farm while the Blues were sleeping, and the thing was over in a trice. I have a horse here; will you deign to accept it, general?"

A peasant led up a white horse with military housings. The Marquis mounted him without accepting Gavard's proffered assistance.

"Hurrah!" cried the peasants. The English fashion of cheering is much in vogue on the Breton coast, for the people have continual dealings with the Channel islands.

Gavard made the military salute, asking, as he did so, "Where will you establish your headquarters, my lord?"

"At first, in the forest of Fougères."

"It is one of the seven forests belonging to you."

"The curate of the Chapelle-Erbrée."

"I know him. He has made the trip to Jersey." A priest stepped out from the ranks and said,—

The Marquis turned his head.

"Good morning, Monsieur le Curé. There is work in store for you."

"So much the better, Monsieur le Marquis."

"You will have to hear the confessions of such as desire your services. No one will be forced."

"Marquis," said the priest, "at Guéménée, Gaston compels the republicans to confess."

"He is a hairdresser. The dying should be allowed free choice in such a matter."

Gavard, who had gone away to give certain orders, now returned.

"I await your commands, general."

"In the first place, the rendez-vous is in the forest of Fougères. Direct the men to separate and meet there."

"The order has been given."

"Did you not say that the people of Herbe-en-Pail were friendly to the Blues?"

"Was the farm burned?"

"Did you burn the hamlet?"

"The Blues tried to defend themselves. But they numbered one hundred and fifty, while we were seven thousand."

"What Blues are they?"

"He who ordered the drums to beat while they were beheading the king? Then it is a Parisian battalion?"

"What was it called?"

"Their banner has on it, 'Battalion of the Bonnet-Rouge.'"

"What is to be done with the wounded?"

"What are we to do with the prisoners?"

"There are about eighty of them."

"There are two women."

"Treat them all alike."

"Bring them along. We will decide what Is to be done with them."

And the Marquis spurred his horse forward.

Add The Vicissitudes of Civil War to your library.

Return to the Victor Hugo library