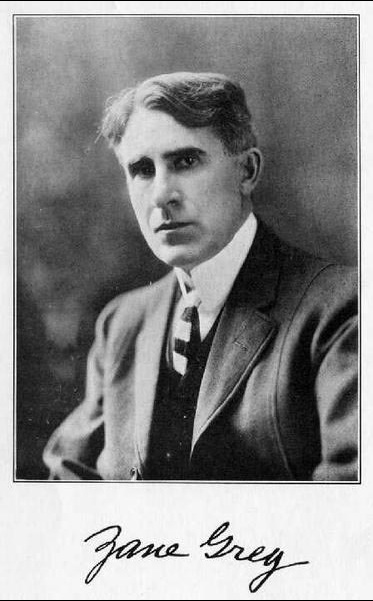 Zane Grey (1872 - 1939) was a popular American frontier novelist who wrote his first story at the age of fifteen, entitled Jim of the Cave. His father reportedly responded by tearing the book to shreds and giving Zane a beating. It's long been observed that the best way to ensure a teen-ager will do something is to offer a prohibition against it. And I'd like to think that this episode of "parental guidance" was a primary contributor to Grey's prolific career as an American novelist (although he was also a dentist by training).

Given the name Pearl Zane Grey, he was born into a family that immigrated to the American colonies in 1673 and grew up in Zanesville, OH, a town founded by and named after his maternal great-grandfather who was the American Revolutionary War patriot, Ebenezer Zane. A fun fact about the origins of his name: "Pearl Grey" was used to describe Queen Victoria's mourning dress color. He was an avid reader, among his favorite adventures: Robinson Crusoe, James Fenimore Cooper's Leatherstocking Tales, and dime novels featuring Buffalo Bill. No wonder little Zane became fascinated with history, particularly the American West, for its far-reaching opportunities, danger, and intrigue.

As a writer, Zane is recognized as an iconic voice of the Western genre and the American frontier. His most famous novel is the popular American Western Riders of the Purple Sage (1912). Many of Zane's works had a second life: 112 movies and at least one television series were adapted from his stories. He inspired many Western writers and may be one of the first millionaire authors. He was reportedly Dwight D. Eisenhower's favorite author.

Riders of the Purple Sage
The Heritage of the Desert