St. George and the Dragon

St. George and the Dragon was published in Heroes Every Child Should Know (1905), adapted by Hamilton Wright Mabie. 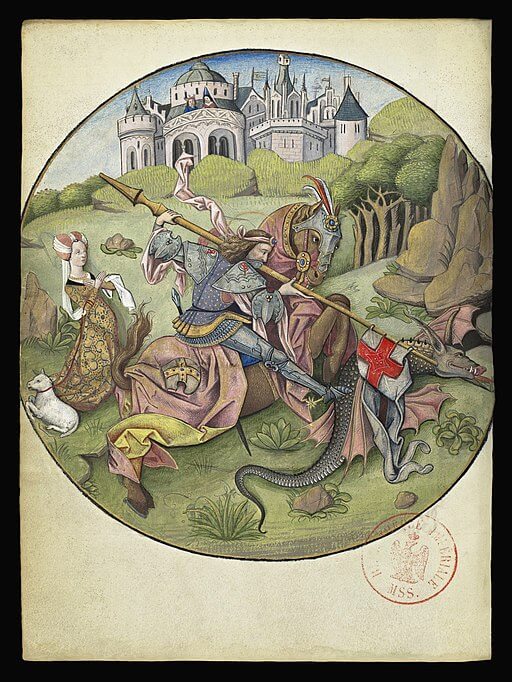 In the year 280, in a town in Cappadocia, was born that great soldier and champion of the oppressed whom we call St. George. His parents were Christians, and by them, and especially by his mother, he was most carefully instructed and trained.

When the youth came to the age of seventeen years he took up the profession of arms, and since he was gifted with beauty of person, intelligence, and an exquisite courtesy, he rose rapidly to a considerable military rank. Especially he pleased his imperial master, Diocletian.

One day while the Emperor, who was devoted to the worship of Apollo, was consulting at a shrine of that god upon an affair of much importance, from the dark depths of the cavern came forth a voice saying, "The just who are on the earth keep me from telling the truth. By them the inspiration of the Sacred Tripod is made a lie." At once the Emperor was stricken with consternation and asked who these just people were. "Master," answered one of the priests of Apollo, "they are the Christians." This answer so enraged Diocletian that he rekindled his persecutions.

Now from the first the young soldier George had burned with indignation because of the unspeakable cruelties put upon Christians, and he had spoken out boldly in defence of his brethren. His friends had counselled silence and prudence. But George would have none. He knew, however, that he might be called upon to suffer at any time, and he hoped to do better work for the world and to die after braver effort. He therefore distributed his money and his fine apparel among the poor and needy, set free all the slaves he possessed, and went forth upon knightly travel.

While pricking one day through the plains of Libya he came to a certain city called Silene, the people of which were bewailing a dire misfortune that had come upon them. An enormous dragon had issued from a marsh neighbouring the town and had devoured all their flocks and herds. Already the monster had taken dwelling near the city walls, and at such distance the people had been able to keep him only by granting him two sheep every day for his food and drink. If they had failed in this he would have come within their walls and poisoned every man, woman, and child with his plague-like breath.

But now already all the flocks and herds had been eaten. Nothing remained to fill the insatiable maw of the dragon but the little people of the homes and hearths of all the town. Every day two children were now given him. Each child taken was under the age of fifteen, and was chosen by lot. Thus it happened that every house and every street and all the public squares echoed with the wailing of unhappy parents and the cries of the innocents who were soon to be offered.

Now it chanced that the King of the city had one daughter, an exceeding fair girl both in mind and body, and after many days of the choosing of lots for the sacrifice, and after many a blooming girl and boy had met an unhappy death, the lot fell to this maiden, Cleodolinda. When her father, the King, heard his misfortune, in his despair he offered all the gold in the state treasury and even half his kingdom, to redeem the maiden. But at this many fathers and mothers who had lost their children murmured greatly and said, "O King, art thou just? By thy edict thou hast made us desolate. And now behold thou wouldst withhold thine own child!"

Thus the people spake, and speaking they waxed wroth greatly, and so joining together they marched threatening to burn the King in his palace unless he delivered the maiden to fulfil her lot. To such demands the King perforce submitted, and at last he asked only a delay of eight days which he might spend with the lovely girl and bewail her fate. This the people granted.

At the end of the time agreed to the fair victim was led forth. She fell at her father's feet asking his blessing and protesting she was ready to die for her people. Then amid tears and lamentations she was led to the walls and put without. The gates were shut and barred against her.

She walked towards the dwelling of the dragon, slowly and painfully, for the road was strewn with the bones of her playmates, and she wept as she went on her way.

It was this very morning that George, courageously seeking to help the weak, and strong to serve the truth, was passing by in his knightly journeying. He saw stretched before him the noisome path, and, moved to see so beautiful a maiden in tears, he checked his charger and asked her why she wept. The whole pitiful story she recounted, to which the valiant one answered, "Fear not; I will deliver you."

"Oh noble youth," cried the fair victim, "tarry not here lest you perish with me. Fly, I beseech you."

"God forbid that I should fly," said George in answer; "I will lift my hand against this loathly thing, and I will deliver you through the power that lives in all true followers of Christ."

At that moment the dragon was seen coming forth from his lair half flying and half crawling towards them. "Fly, I beseech you, brave knight," cried the fair girl trembling, "Leave me here to die."

But George answered not. Rather he put spurs to his horse and, calling upon his Lord, rushed towards the monster, and, after a terrible and prolonged combat, pinned the mighty hulk to the earth with his lance. Then he called to the maiden to bring him her girdle. With this he bound the dragon fast, and gave the end of the girdle into her hand, and the subdued monster crawled after them like a dog.

Walking in this way they approached the city. All the onlooking people were stricken with terror, but George called out to them saying, "Fear nothing. Only believe in Christ, through whose help I have conquered this adversary, and live in accord with His teachings, and I will destroy him before your eyes."

So the King and the people believed and such a life they endeavoured to live.

Then St. George slew the dragon and cut off his head, and the King gave great treasure to the knight. But all the rewards George distributed among the sick and necessitous and kept nothing for himself, and then he went further on his way of helpfulness.

About this time the Emperor Diocletian issued an edict which was published the length and breadth of his empire. This edict was nailed to the doors of temples, upon the walls of public markets, in all places people frequented, and those who read it read it with terror and hid their faces in despair. For it condemned all Christians. But St. George when he saw the writing was filled with indignation. That spirit and courage which comes to all of us from communion with the eternal powers heartened and strengthened him, and he tore down the unhappy utterance and trampled it under foot.

Thus prepared for death George approached the Emperor. "What wouldst thou?" cried Diocletian angrily, having heard from his proconsul Dacian that this young man deserved torture. "Liberty, sir, for the innocent Christians," answered the martyr. "At the least liberty, since their liberty can hurt no one."

"Young man," returned Diocletian with threatening looks, "think of thine own liberty and thy future."

Before George could make answer the ill-will of the tyrant waxed to ardent hatred and he summoned guards to take the martyr to prison. Once within the dungeon the keepers threw him to the ground, put his feet in stocks and placed a stone of great weight upon his chest. But even so, in the midst of torture, the blessed one ceased not to give thanks to God for this opportunity to bear witness to Christ's teachings.

The next day they stretched the martyr on a wheel full of sharp spokes. But a voice from heaven came to comfort him and said, "George, fear not; so it is with those who witness to the truth." And there appeared to him an angel brighter than the sun, clothed in a white robe, who stretched out a hand to embrace and encourage him in his pain. Two of the officers of the prison who saw this beautiful vision became Christians and from that day endeavoured to live after the teachings of Christ.

There is still another tale that after George had been comforted by the angel who descended from heaven, his tormentors flung him into a cauldron of boiling lead, and when they believed they had subdued him by the force of his agonies, they brought him to a temple to assist in their worship, and the people ran in crowds to behold his humiliation, and the priests mocked him.

The Emperor, seeing the constancy of George, once more sought to move him by entreaties. But the great soldier refused to be judged by words, only by deeds. He even demanded to go to see the gods Diocletian himself worshipped.

The Emperor, believing that at length George was coming to his right mind, and was about to yield, ordered the Roman Senate and people to assemble in order that all might be witnesses of George's acknowledgement of his own, Diocletian's, gods.

When they were thus gathered together in the Emperor's temple, and the eyes of all the people were fixed upon the weak and tortured saint to see what he would do, he drew near a statue of the sun-god Apollo, and stretching out his hand toward the image he said slowly, "Wouldst thou that I should offer thee sacrifices as to a god?" The demon who was in the statue made answer, "I am not God. There is but one God and Christ is his greatest prophet." At that very hour were heard horrible wailing sounds coming from the mouths of idols the world over, and the statues of the old gods either all fell over or crumbled to dust. One account says that St. George knelt down and prayed, and thunder and lightning from heaven fell upon the idols and destroyed them.

Angry at the breaking of their power, the priests of the gods cried to the Emperor that he must rid himself of so potent a magician and cut off his head. The priests also incited the people to lay hands on the martyr.

So it was commanded that George, the Christian knight, should be beheaded. He was dragged to the place of execution, and there, bending his neck to the sword of the executioner and absorbed in prayer, he received bravely and thankfully the stroke of death in April, 303.

So stands St. George ever before the youth of the world, one of the champions of Christendom, a model of courage, a brave interceder for the oppressed, an example of pure, firm and enduring doing for others, a true soldier of Christ.

You may enjoy reading a twist on the classic fairy tale, The Reluctant Dragon, in which a boy convinces St. George NOT to slay the dragon, by Kenneth Grahame.