The Sagacious Monkey and the Boar

The Sagacious Monkey and the Boar is from Japanese Fairy Tales compiled by Yei Theodora Ozaki in 1908. "Sagacious" is a fancy word meaning really smart and clever! This story illustrates the expression, "No good deed goes unpunished." It is featured in our collection of Children's Stories. [Illustration by Kansetsu Hashimoto, Monkey in cherry tree, 1938.]

Long, long ago, there lived in the province of Shinshin in Japan, a traveling monkey-man, who earned his living by taking round a monkey and showing off the animal's tricks.

One evening the man came home in a very bad temper and told his wife to send for the butcher the next morning.

The wife was very bewildered and asked her husband:

"Why do you wish me to send for the butcher?"

"It's no use taking that monkey round any longer, he's too old and forgets his tricks. I beat him with my stick all I know how, but he won't dance properly. I must now sell him to the butcher and make what money out of him I can. There is nothing else to be done."

The woman felt very sorry for the poor little animal, and pleaded for her husband to spare the monkey, but her pleading was all in vain, the man was determined to sell him to the butcher.

Now the monkey was in the next room and overheard every word of the conversation. He soon understood that he was to be killed, and he said to himself: 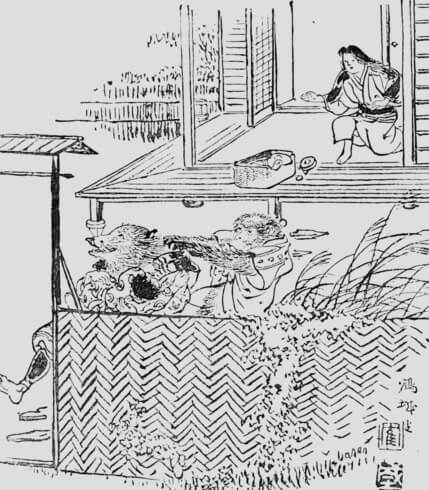 "Barbarous, indeed, is my master! Here I have served him faithfully for years, and instead of allowing me to end my days comfortably and in peace, he is going to let me be cut up by the butcher, and my poor body is to be roasted and stewed and eaten? Woe is me! What am I to do. Ah! a bright thought has struck me! There is, I know, a wild bear living in the forest near by. I have often heard tell of his wisdom. Perhaps if I go to him and tell him the strait I am in he will give me his counsel. I will go and try."

There was no time to lose. The monkey slipped out of the house and ran as quickly as he could to the forest to find the boar. The boar was at home, and the monkey began his tale of woe at once.

"Good Mr. Boar, I have heard of your excellent wisdom. I am in great trouble, you alone can help me. I have grown old in the service of my master, and because I cannot dance properly now he intends to sell me to the butcher. What do you advise me to do? I know how clever you are!"

The boar was pleased at the flattery and determined to help the monkey. He thought for a little while and then said:

"Hasn't your master a baby?"

"Doesn't it lie by the door in the morning when your mistress begins the work of the day? Well, I will come round early and when I see my opportunity I will seize the child and run off with it."

"What then?" said the monkey.

"Why the mother will be in a tremendous scare, and before your master and mistress know what to do, you must run after me and rescue the child and take it home safely to its parents, and you will see that when the butcher comes they won't have the heart to sell you."

The monkey thanked the boar many times and then went home. He did not sleep much that night, as you may imagine, for thinking of the morrow. His life depended on whether the boar's plan succeeded or not. He was the first up, waiting anxiously for what was to happen. It seemed to him a very long time before his master's wife began to move about and open the shutters to let in the light of day. Then all happened as the boar had planned. The mother placed her child near the porch as usual while she tidied up the house and got her breakfast ready.

The child was crooning happily in the morning sunlight, dabbing on the mats at the play of light and shadow. Suddenly there was a noise in the porch and a loud cry from the child. The mother ran out from the kitchen to the spot, only just in time to see the boar disappearing through the gate with her child in its clutch. She flung out her hands with a loud cry of despair and rushed into the inner room where her husband was still sleeping soundly.

He sat up slowly and rubbed his eyes, and crossly demanded what his wife was making all that noise about. By the time that the man was alive to what had happened, and they both got outside the gate, the boar had got well away, but they saw the monkey running after the thief as hard as his legs would carry him.

Both the man and wife were moved to admiration at the plucky conduct of the sagacious monkey, and their gratitude knew no bounds when the faithful monkey brought the child safely back to their arms.

"There!" said the wife. "This is the animal you want to kill—if the monkey hadn't been here we should have lost our child forever."

"You are right, wife, for once," said the man as he carried the child into the house. "You may send the butcher back when he comes, and now give us all a good breakfast and the monkey too."

When the butcher arrived he was sent away with an order for some boar's meat for the evening dinner, and the monkey was petted and lived the rest of his days in peace, nor did his master ever strike him again.

You might also enjoy reading The Farmer and the Badger, How the Moon Became Beautiful, and our collection of Favorite Fairy Tales.