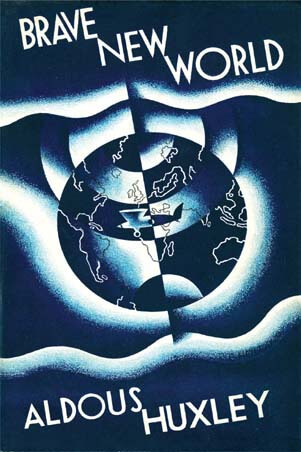 "Words can be like X-rays if you use them properly. You read and you’re pierced."
Brave New World was written in 1931 and published in 1932. It is not currently in the public domain so the text cannot be republished here. You may be interested in our collection of Dystopian Stories and Science Fiction Study Guide.

I would also direct the interested student or teacher toward Chris Hedge's essay, "2011: A Brave New Dystopia" and a derivative work that appeared at Zerohedge.com. With the recent revelations of the NSA's internal spying and surveillance programs, fake news, and the opioid epidemic, Orwell's 1984 and Huxley's Brave New World take on even more relevance in modern times.

The two greatest visions of a future dystopia were George Orwell’s “1984” and Aldous Huxley’s “Brave New World.” The debate, between those who watched our descent towards corporate totalitarianism, was who was right. Would we be, as Orwell wrote, dominated by a repressive surveillance and security state that used crude and violent forms of control? Or would we be, as Huxley envisioned, entranced by entertainment and spectacle, captivated by technology and seduced by profligate consumption to embrace our own oppression? It turns out Orwell and Huxley were both right. Huxley saw the first stage of our enslavement. Orwell saw the second.

I think the really troubling question is quite simple: What if 1984 is upon us, but as Huxley indirectly observed, nobody cares or prefers the artificial experiences of a controlled life to the genuine experiences of a free life stripped of its artificial enhancements?

Here is the piece from Hedges, and the derivative work that appeared at Zero Hedge

Return to the Aldous Huxley library.