A Christmas Hamper: A Volume of Pictures and Stories for Little Folks was published in 1889 by T. Nelson and Sons by various unattributed authors. This story is a lesson about treating ants and other small things with kindness 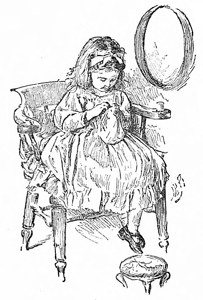 OUT in the garden Mary sat hemming a pocket-handkerchief, and there came a little insect running—oh, in such a hurry!—across the small stone table by her side.

The sewing was not done, for Mary liked doing nothing best, and she thought it would be fun to drop her thimble over the little ant. “Now he is in the dark,” said she. “Can he mind? He is only such a little tiny thing.”

Mary ran away, for her mother called her, and she forgot all about the ant under the thimble.

There he was, running round and round and round the dark prison, with little horns on his head quivering, little perfect legs bending as beautifully as those of a race-horse, and he was in quite as big a fright as if he were an elephant.

“Oh,” you would have heard him say, if you had been clever enough, “I can’t get out, I can’t get out! I shall lie down and die.” ” Mary went to bed, and in the night the rain poured. The handkerchief was soaked as if somebody had been crying very much, when she went out to fetch it as soon as the sun shone. She remembered who was under the thimble. “I wonder what he is doing,” said Mary. But when she lifted up the thimble the little tiny thing lay stiff and still.

“Oh, did he die of being under the thimble?” she said aloud. “I am afraid he did mind.”

“Why did you do that, Mary?” said her father, who was close by, and who had guessed the truth. “See! he moves one of his legs. Run to the house and fetch a wee taste of honey from the breakfast-table for the little thing you starved.”

She touched the honey in the spoon with a blade of grass, and tenderly put a drop of it before the little ant. He put out a fairy tongue to lick up the sweet stuff. He grew well, and stood upon his pretty little jointed feet. He tried to run.

“Where is he in such a hurry to go, do you think?” said father.

“He wants to run home,” said father. “I know where he lives. In a little round world of ants, under the apple tree.”

“Oh! Has such a little tiny thing a real home of his own? I should have thought he lived just anywhere about.”

“Why, he would not like that at all. At home he has a fine palace, with passages and rooms more than you could count; he and the others dug them out, that they might all live together like little people in a little town.”

“And has he got a wife and children—a lot of little ants at home?”

“The baby ants are born as eggs; they are little helpless things, and must be carried about by their big relations. There are father ants and mother ants, and lots of other ants who are nurses to the little ones. Nobody knows his own children, but all the grown-up ones are kind to all the babies. This is a little nurse ant. See how she hurries off! Her babies at home must have their faces washed.”

“Not a bit of it,” said father. “Ants really do clean their young ones by licking them. On sunny days they carry their babies out, and let them lie in the sun. On cold days they take them downstairs, away from the cold wind and the rain. The worker ants are the nurses. Though the little ones are not theirs, they love them and care for them as dearly as if they were.”

“Why, that’s just like Aunt Jenny who lives with us, and mends our things, and puts baby to bed, and goes out for walks with us.”

“Is that the reason we say Ant Jenny?”

“You little dunce! Who taught you to spell? But it is not a bad idea, all the same. It would be a good thing if there were as many ‘ant’ Jennys in this big round world of ours as there are in the ants’ little round world—folk who care for all, no matter whose children they are.”

While they were talking, the little ant crept to the edge of the table, and down the side, and was soon lost among the blades of grass.

“He will never find his way,” said Mary.

“Let him alone for that,” said father. “The ants have paths leading from their hill. They never lose their way. But they meet with sad accidents sometimes. What do you think I saw the other day? One of these small chaps—it may have been this very one—was carrying home a scrap of something in his jaws for the youngsters at home. As he ran along, a bird dropped an ivy berry on him. Poor mite of a thing! This was worse than if a cannon ball were to fall from the sky on one of us. He lay under it, not able to move. By-and-by one of his brother ants, who was taking a stroll, caught sight of him under the berry.

“First he tried to push the berry off his friend’s body, but it was too heavy. Next he caught hold of one of his friend’s legs with his jaws, and tugged till I thought it would come off. Then he rushed about in a frantic state, as if he were saying to himself, ‘What shall I do? what shall I do?’ And then he ran off up the path. In another minute he came hurrying back with three other ants.”

“Is it quite true, father?”

“Quite. The four ants talked together by gentle touches of their horns. They looked as if they were telling one another what a dreadful accident it was, and how nobody knew whose turn would come next. After this they set to work with a will. Two of them pushed the berry as hard as they could, while the other two pulled their friend out by the hind legs. When at last he was free, they crowded round as if petting and kissing him. You see these little ant folk have found out that ‘’Tis love, love, love, that makes the world go round.’ I shouldn’t wonder if that ant you teased so thoughtlessly is gone off to tell the news at home that there is a drop of honey to be had here.”

In a little while back came the ant with a troop of friends. 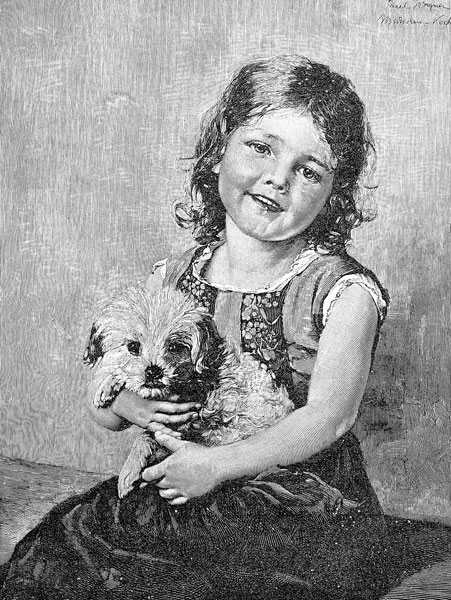 “He has been home and told them the good news about the honey,” said father. “Do you think that all children are as kind as that?”

Mary said, “No, they’re not. I don’t run to call all the others when I find a good place for blackberries.”

“Then,” said father, “don’t be unkind to the ant, who is kinder than you, though he is only a little tiny thing.”

If you enjoyed this story, you might also like The Little Thief in the Pantry, and the rhyme, Little Boy, featured in Pre-K Wordplay!
8.4

Add A Little Tiny Thing to your library.

Return to the Anonymous library , or . . . Read the next short story; Goody Two Shoes