A Child's Dream of a Star

There was one clear shining star that used to come out in the sky before the rest, near the church spire, above the graves. It was larger and more beautiful, they thought, than all the others, and every night they watched for it, standing hand in hand at a window. Whoever saw it first cried out, 'I see the star!' And often they cried out both together, knowing so well when it would rise, and where. So they grew to be such friends with it, that, before lying down in their beds, they always looked out once again, to bid it good night; and when they were turning round to sleep, they used to say, 'God bless the star!' 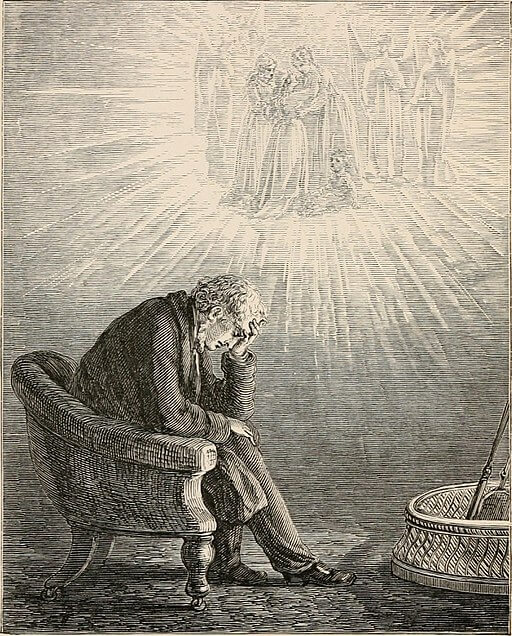 But while she was still very young, oh, very, very young, the sister drooped, and came to be so weak that she could no longer stand in the window at night; and then the child looked sadly out by himself, and when he saw the star, turned round and said to the patient pale face on the bed, 'I see the star!' and then a smile would come upon the face, and a little weak voice used to say, 'God bless my brother and the star!'

Now, these rays were so bright, and they seemed to make such a shining way from earth to Heaven, that when the child went to his solitary bed, he dreamed about the star; and dreamed that, lying where he was, he saw a train of people taken up that sparkling road by angels. And the star, opening, showed him a great world of light, where many more such angels waited to receive them.

All these angels, who were waiting, turned their beaming eyes upon the people who were carried up into the star; and some came out from the long rows in which they stood, and fell upon the people's necks, and kissed them tenderly, and went away with them down avenues of light, and were so happy in their company, that lying in his bed he wept for joy.

But, there were many angels who did not go with them, and among them one he knew. The patient face that once had lain upon the bed was glorified and radiant, but his heart found out his sister among all the host.

His sister's angel lingered near the entrance of the star, and said to the leader among those who had brought the people thither:

She was turning hopefully away, when the child stretched out his arms, and cried, 'O, sister, I am here! Take me!' and then she turned her beaming eyes upon him, and it was night; and the star was shining into the room, making long rays down towards him as he saw it through his tears.

From that hour forth, the child looked out upon the star as on the home he was to go to, when his time should come; and he thought that he did not belong to the earth alone, but to the star too, because of his sister's angel gone before.

There was a baby born to be a brother to the child; and while he was so little that he never yet had spoken word, he stretched his tiny form out on his bed, and died.

Again the child dreamed of the open star, and of the company of angels, and the train of people, and the rows of angels with their beaming eyes all turned upon those people's faces.

Said his sister's angel to the leader:

And he said, 'Not that one, but another.'

As the child beheld his brother's angel in her arms, he cried, 'O, sister, I am here! Take me!' And she turned and smiled upon him, and the star was shining.

He grew to be a young man, and was busy at his books when an old servant came to him and said:

'Thy mother is no more. I bring her blessing on her darling son!'

Again at night he saw the star, and all that former company. Said his sister's angel to the leader.

A mighty cry of joy went forth through all the star, because the mother was re-united to her two children. And he stretched out his arms and cried, 'O, mother, sister, and brother, I am here! Take me!' And they answered him, 'Not yet,' and the star was shining.

He grew to be a man, whose hair was turning grey, and he was sitting in his chair by the fireside, heavy with grief, and with his face bedewed with tears, when the star opened once again.

Said his sister's angel to the leader: 'Is my brother come?'

And he said, 'Nay, but his maiden daughter.'

And the man who had been the child saw his daughter, newly lost to him, a celestial creature among those three, and he said, 'My daughter's head is on my sister's bosom, and her arm is around my mother's neck, and at her feet there is the baby of old time, and I can bear the parting from her, GOD be praised!'

And the star was shining.

Thus the child came to be an old man, and his once smooth face was wrinkled, and his steps were slow and feeble, and his back was bent. And one night as he lay upon his bed, his children standing round, he cried, as he had cried so long ago:

They whispered one another, 'He is dying.'

And he said, 'I am. My age is falling from me like a garment, and I move towards the star as a child. And O, my Father, now I thank thee that it has so often opened, to receive those dear ones who await me!'

And the star was shining; and it shines upon his grave.

Return to the Charles Dickens Home Page, or . . . Read the next short story; A Christmas Tree