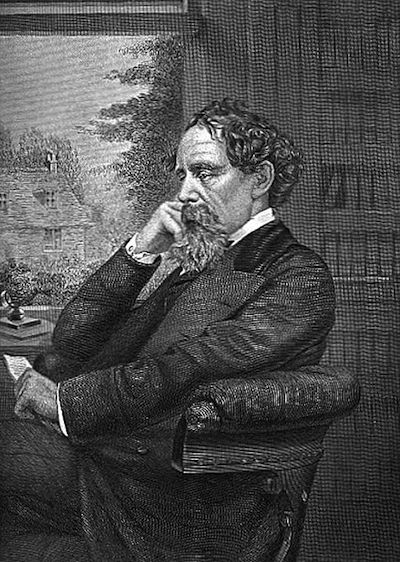 Rising from a difficult childhood, Charles Dickens became one of the world's most famous writers. With the difficult experiences of his childhood in mind, he was also a prominent social critic and used his fiction to illuminate many of the social problems of his times. Dickens described his first eleven years as idyllic, but his father's bankruptcy brought a swift end to those days. When Dickens was twelve years old, his father was thrown into debtor's prison; and, as was customary for the times, his family joined him. He was soon boarded with a family acquaintance and found himself working ten hours a day, under cruel conditions, in a blacking factory where he was set to the task of pasting labels to pots of boot polish.

"My work was to cover the pots of paste-blacking; first with a piece of oil-paper, and then with a piece of blue paper; to tie them round with a string; and then to clip the paper close and neat, all round, until it looked as smart as a pot of ointment from an apothecary's shop. When a certain number of grosses of pots had attained this pitch of perfection, I was to paste on each a printed label, and then go on again with more pots. Two or three other boys were kept at similar duty down-stairs on similar wages. One of them came up, in a ragged apron and a paper cap, on the first Monday morning, to show me the trick of using the string and tying the knot. His name was Bob Fagin; and I took the liberty of using his name, long afterwards, in Oliver Twist."

Coming up through school, I was always happy to learn that we would be reading a Dicken's novel in one of my classes. In the United States we often segregate classes by ability in middle school and high school. As a result the advanced readers in the same grade would sometimes read different books by the same author. While my class was assigned Great Expectations the other class was reading David Copperfield. As a result, there were several works that I "skipped" because they were not assigned in my class. When I was older I sought to remedy the situation and started to read the books that I had missed while in school. After my first brush with it at Christmas time one year, It became my habit to re-read David Copperfield every Christmas. I probably kept to that custom up for the better half of a decade. If you "missed" some of works in school as well, I hope you will follow my lead and investigate them now.

A Child's Dream of a Star
A Christmas Tree
A Flight
A Good-Humoured Christmas Chapter
A Message from the Sea
A Monument of French Folly
A Poor Man's Tale of a Patent
A Walk in a Workhouse
Bill-Sticking
Births. Mrs. Meek, of a Son
Boots at the Holly-Tree Inn
Christmas at Fezziwig's Warehouse
Doctor Marigold
Down with the Tide
Familiar Epistle from a Parent to a Child Aged Two Years and Two Months
Full Report of the First Meeting of the Mudfog Association
Full Report of the Second Meeting of the Mudfog Association
Going into Society
Hunted Down
Lying Awake
Mr. Pickwick's Romantic Adventure to Meet with a Middle-aged Lady in Yellow Curl-Papers
Mr. Robert Bolton: The 'Gentleman Connected with the Press'
Mrs. Lirriper's Legacy
Mrs. Lirriper's Lodgings
Mugby Junction
Nobody's Story
On Duty with Inspector Field
Our Bore
Our English Watering-Place
Our French Watering-Place
Our Honourable Friend
Our School
Our Vestry
Out of the Season
Out of Town
Plated Article
Prince Bull
Public Life of Mr. Tulrumble--Once Mayor of Mudfog
Sketches by Boz by Charles Dickens
Sketches of Young Couples
Sketches of Young Gentlemen
Somebody's Luggage
Some Particulars Concerning a Lion
Sunday Under Three Heads
The Baron of Grogzwig
The Begging-Letter Writer
The Child's Story
The Detective Police
The Ghost of Art
The Haunted House
The Lamplighter
The Long Voyage
The Magic Fishbone
The Noble Savage
The Pantomime of Life
The Perils of Certain English Prisoners
The Poor Relation's Story
The Schoolboy's Story
The Seven Poor Travellers
The Signal Man
The Story of the Goblins Who Stole a Sexton
The Trial for Murder
The Wreck of the Golden Mary
Three Detective Anecdotes
To Be Read at Dusk
Tom Tiddler's Ground
What Christmas Is As We Grow Older