A Story of the Red Cross

Chapter II: The Texas Famine and the Mt. Vernon Cyclone 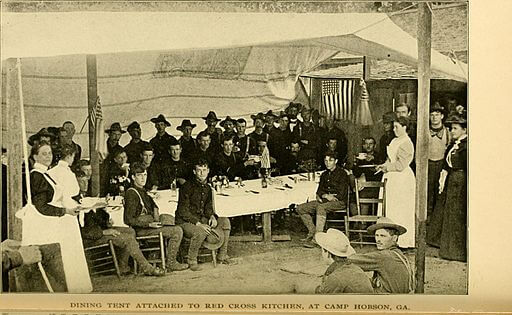 Before the close of the following year, 1885, came what was known as the "Texas Famine." Thousands of miles of wild land, forming the Pan Handle, had been suddenly opened by the building of a Southern Railroad. In the speculative anxiety of the Road to people its newly acquired territory, unwarranted inducements of climatic advantages had been unscrupulously held out to the poor farmers of Mississippi, Alabama, and Georgia.

Lured by the pictures presented them, some thousands of families had been induced to leave their old, worn-out farms, and with the little they could carry or drive, reach the new Eldorado, to find a new farm that needed only the planting to make them rich, prosperous, and happy, without labor. They planted. The first year brought some returns—the second was a drought with no returns—the third the same. Hunger for themselves and starvation for their stock stared them in the face. They could not pick up and go back—the rivers were dry from the Rio Grande to the Brazos—the earth was iron, and the heavens brass; cattle wandered at will for water and feed, and their bones whitened the plains.

These were poor little peoples. They tried to make the great State know of their distress, but the rich railroad proprietors held the press, and no one knew their condition or could get correct information. At length a faithful clergyman came to Washington, to President Cleveland, and the Red Cross.

We consulted with the President, who gave encouragement for us to go to Texas and learn the facts.

In mid-winter, 1886, accompanied by Dr. Hubbell, the journey was undertaken. We proceeded to Albany, Texas, made headquarters—traveled over the stricken counties, found wretchedness, hunger, thirst, cold, heart-breaking discouragement. The third year of drought was upon them, and the good people of that great State, misled by its press, its press in turn misled by the speculators, innocently discredited every report of distress, and amused themselves by little sly innuendoes and witty jokes on the "Texas Famine."

The condition was pitiful. To them it was hopeless. And yet not a dollar or a pound was needed outside of Texas. They only required to know the truth. This then was our task. We ceased to journey over arid fields of suffering, and turned our steps resolutely to the editorial rooms of the Dallas and Galveston News, at Dallas. Both editors were present; both sat half-breathless while the flood of information rolled over them in no uncertain terms.

I shall never forget the tears in the mild blue eyes of General Belo, as he learned what he had done, and was still doing. Twelve hours brought another issue of the two papers. A column of editorial told the true situation. A modest contribution of the Red Cross headed a subscription list, General Belo following with his, and almost immediately the legislature made an appropriation of one hundred thousand dollars for food and supplies.

The tender-hearted and conscience-smitten people sent their donations. Our task was done. We had seen and conquered.

In the midst of a cold rain in February we reached Washington. A concise and full report was made to President Cleveland, saying in conclusion: "I thank you with all my heart, Mr. President, for the encouragement at the commencement, and for the privilege of writing you. We have done this little bit of work faithfully and hope it may meet your approval."

President Cleveland's letter of thanks still bears testimony of his care for the people of the country, and his faith in its institutions.

Not a dollar of outside help passed through our hands, but the little permanent provision was equal to the occasion and we had still a half left of our three thousand dollars. That was our first acquaintance with Texas. Galveston followed many years later with the same firm accord and good results. The bonds of affection had grown deep and strong between the great thousand-mile State and the little Red Cross that loved to serve her.

In the following year, 1887, we were notified by the International Committee of Geneva of the conference to be held at Carlsruhe, by invitation of the Grand Duke and Grand Duchess of Baden. We were directed to inform the Department of State of this fact. We did so, and an appropriation was made by Congress to defray the expenses of three delegates.

It may be well to explain that in these appointments the Government does not place the appropriation in the hands of the appointees, but simply becomes a guaranty. The appointee provides his own funds. If, after return, vouchers can be shown that the sum guaranteed has been spent according to regulations, he is reimbursed in due course.

Here was at least a contrast from a rough Mississippi River boat and the crude homes of an unsettled Western State, to the royal carriage waiting to convey one to the apartments reserved in a palace, the elegance and culture of a court, the precision of a congress of representatives of the nations of the world. The questions of humanity discussed by them, the meeting of friends of other days, the regal bearing of the royal host and hostess, the last parting from the dear old Emperor of ninety-two, and his tenderly spoken, "It is the last time, good-by"; the loving and last farewell of the beloved Empress Augusta, the patron saint of the Red Cross; Bismarck and Moltke, in review, each with his Red Cross insignia; the cordial hand grasp and the farewell never repeated—and all of this attention to and interest in a subject that the country I had gone to represent scarcely realized had an existence beyond the receiving of some second-hand clothing, misfit shoes, and a little money sent by some one to some place, where something bad had happened.

No one dreamed that it meant anything more, or that it needed anything after this, and nothing more was done.

It is only now, after almost two decades and within the last three months, that we commence to awaken and wonder, with a mingled national and personal sense of indignation, why our American Red Cross is not as rich and great as in other nations?

In February, 1888, occurred the Mt. Vernon, Ill., cyclone, cutting a broad swath through one-half of the beautiful county-seat, tearing down all heavy buildings, picking up the lighter ones and sweeping them along like cardboard.

In three minutes the work of destruction was over. Ten minutes later the sun shone out brightly over the ruins of the town, the wails of the maimed and dying, and the lifeless bodies of the dead.

Fires broke out on every hand, and the victims pinned down under the wreckage were subjects for the flames. Appeals for assistance went out, but by unfortunate press representation failed to arouse the public, till after several days, when we were reached, through their representative in Congress, begging that in mercy we go to them. We arrived in the night, found homes destroyed, hospitals full, scant medical care, few nurses, food scarce and no money, a relief committee of excellent men, but little to distribute.

At daylight we looked over the situation and sent this simple message to the Associated Press:

"The pitiless snow is falling on the heads of three thousand people, who are without homes, without food or clothing, and without money.

This was all. We assisted their relief committee to arrange for the receipt and distribution of funds, sent for experienced helpers to take charge of supplies, to distribute clothing, and aid the hospital service. We remained two weeks, and left them with more supplies than they knew how to distribute, and the Citizens' Committee, with accumulating cash in its treasury of ninety thousand dollars, full of hope, life, and a gratitude they could not speak.

As in the Texas famine, we paid our own expenses and no dollar but our own had passed our hands. We were only glad to do this, in the hope that we were building up an institution of self-help of the people, that would one day win its way to their favor and aid.