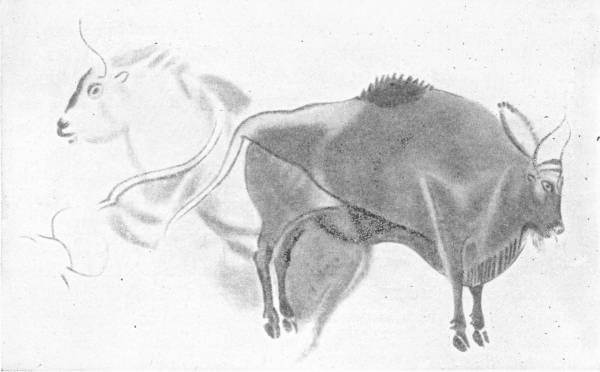 THE earliest signs and traces at present known to science, of a humanity which is indisputably kindred with ourselves, have been found in western Europe and particularly in France and Spain. Bones, weapons, scratchings upon bone and rock, carved fragments of bone, and paintings in caves and upon rock surfaces dating. it is supposed. from 30,000 years ago or more, have been discovered in both these countries. Spain is at present the richest country in the world in these first relics of our real human ancestors.

Of course our present collections of these things are the merest beginnings of the accumulations we may hope for in the future, when there are searchers enough to make a thorough examination of all possible sources and when other countries in the world, now inaccessible to archæologists, have been explored in some detail. The greater part of Africa and Asia has never even been traversed yet by a trained observer interested in these matters and free to explore, and we must be very careful therefore not to conclude that the early true men were distinctively inhabitants of western Europe or that they first appeared in that region.

In Asia or Africa or submerged beneath the sea of to-day there may be richer and much earlier deposits of real human remains than anything that has yet come to light. I write in Asia or Africa, and I do not mention America because so far there have been no finds at all of any of the higher Primates, either of great apes, sub-men, Neanderthalers nor early true men. This development of life seems to have been an exclusively old world development, and it was only apparently at the end of the Old Stone Age that human beings first made their way across the land connexion that is now cut by Behring Straits, into the American continent.

These first real human beings we know of in Europe appear already to have belonged to one or other of at least two very distinct races. One of these races was of a very high type indeed; it was tall and big brained. One of the women’s skulls found exceeds in capacity that of the average man of to-day. One of the men’s skeletons is over six feet in height. The physical type resembled that of the North American Indian. From the Cro-Magnon cave in which the first skeletons were found these people have been called Cro-Magnards. They were savages, but savages of a high order. The second race, the race of the Grimaldi cave remains, was distinctly negroid in its characters. Its nearest living affinities are the Bushmen and Hottentots of South Africa. It is interesting to find at the very outset of the known human story, that mankind was already racially divided into at least two main varieties; and one is tempted to such unwarrantable guesses as that the former race was probably brownish rather than black and that it came from the East or North, and that the latter was blackish rather than brown and came from the equatorial south.

And these savages of perhaps forty thousand years ago were so human that they pierced shells to make necklaces, painted themselves, carved images of bone and stone, scratched figures on rocks and bones, and painted rude but often very able sketches of beasts and the like upon the smooth walls of caves and upon inviting rock surfaces. They made a great variety of implements, much smaller in scale and finer than those of the Neanderthal men. We have now in our museums great quantities of their implements, their statuettes, their rock drawings and the like.

The earliest of them were hunters. Their chief pursuit was the wild horse, the little bearded pony of that time. They followed it as it moved after pasture. And also they followed the bison. They knew the mammoth, because they have left us strikingly effective pictures of that creature. To judge by one rather ambiguous drawing they trapped and killed it.

They hunted with spears and throwing stones. They do not seem to have had the bow, and it is doubtful if they had yet learnt to tame any animals. They had no dogs. There is one carving of a horse’s head and one or two drawings that suggest a bridled horse, with a twisted skin or tendon round it. But the little horses of that age and region could not have carried a man, and if the horse was domesticated it was used as a led horse. It is doubtful and improbable that they had yet learnt the rather unnatural use of animal’s milk as food.

They do not seem to have erected any buildings though they may have had tents of skins, and though they made clay figures they never rose to the making of pottery. Since they had no cooking implements their cookery must have been rudimentary or nonexistent. They knew nothing of cultivation and nothing of any sort of basket work or woven cloth. Except for their robes of skin or fur they were naked painted savages.

These earliest known men hunted the open steppes of Europe for a hundred centuries perhaps, and then slowly drifted and changed before a change of climate. Europe, century by century, was growing milder and damper. Reindeer receded northward and eastward, and bison and horse followed. The steppes gave way to forests, and red deer took the place of horse and bison. There is a {57}change in the character of the implements with this change in their application. River and lake fishing becomes of great importance to men, and fine implements of bone increased. “The bone needles of this age,” says de Mortillet, “are much superior to those of later, even historical times, down to the Renaissance. The Romans, for example, never had needles comparable to those of this epoch.”

Almost fifteen or twelve thousand years ago a fresh people drifted into the south of Spain, and left very remarkable drawings of themselves upon exposed rock faces there. These were the Azilians (named from the Mas d’Azil cave). They had the bow; they seem to have worn feather headdresses; they drew vividly; but also they had reduced their drawings to a sort of symbolism—a man for instance would be represented by a vertical dab with two or three horizontal dabs—that suggest the dawn of the writing idea. Against hunting sketches there are often marks like tallies. One drawing shows two men smoking out a bees’ nest.

These are the latest of the men that we call Palæolithic (Old Stone Age) because they had only chipped implements. By ten or twelve thousand years a new sort of life has dawned in Europe, men have learnt not only to chip but to polish and grind stone implements, and they have begun cultivation. The Neolithic Age (New Stone Age) was beginning.

It is interesting to note that less than a century ago there still survived in a remote part of the world, in Tasmania, a race of human beings at a lower level of physical and intellectual development than any of these earliest races of mankind who have left traces in Europe. These people had long ago been cut off by geographical changes from the rest of the species, and from stimulation and improvement. They seem to have degenerated rather than developed. They lived a base life subsisting upon shellfish and small game. They had no habitations but only squatting places. They were real men of our species, but they had neither the manual dexterity nor the artistic powers of the first true men.