Chapter XIII - The Beginnings of Cultivation 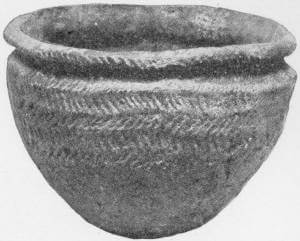 WE are still very ignorant about the beginnings of cultivation and settlement in the world although a vast amount of research and speculation has been given to these matters in the last fifty years. All that we can say with any confidence at present is that somewhen about 15,000 and 12,000 B.C. while the Azilian people were in the south of Spain and while the remnants of the earlier hunters were drifting northward and eastward, somewhere in North Africa or Western Asia or in that great Mediterranean valley that is now submerged under the waters of the Mediterranean sea, there were people who, age by age, were working out two vitally important things; they were beginning cultivation and they were domesticating animals. They were also beginning to make, in addition to the chipped implements of their hunter forebears, implements of polished stone. They had discovered the possibility of basketwork and roughly woven textiles of plant fibre, and they were beginning to make a rudely modelled pottery.

They were entering upon a new phase in human culture, the Neolithic phase (New Stone Age) as distinguished from the Palæolithic (Old Stone) phase of the Cro-Magnards, the Grimaldi people, the Azilians and their like. [1] Slowly these Neolithic people spread over the warmer parts of the world; and the arts they had mastered, the plants and animals they had learnt to use, spread by imitation and acquisition even more widely than they did. By 10,000 B.C., most of mankind was at the Neolithic level.

{66}Now the ploughing of land, the sowing of seed, the reaping of harvest, threshing and grinding, may seem the most obviously reasonable steps to a modern mind just as to a modern mind it is a commonplace that the world is round. What else could you do? people will ask. What else can it be? But to the primitive man of twenty thousand years ago neither of the systems of action and reasoning that seem so sure and manifest to us to-day were at all obvious. He felt his way to effectual practice through a multitude of trials and misconceptions, with fantastic and unnecessary elaborations and false interpretations at every turn. Somewhere in the Mediterranean region, wheat grew wild; and man may have learnt to pound and then grind up its seeds for food long before he learnt to sow. He reaped before he sowed.

And it is a very remarkable thing that throughout the world wherever there is sowing and harvesting there is still traceable the vestiges of a strong primitive association of the idea of sowing with the idea of a blood sacrifice, and primarily of the sacrifice of a human being. The study of the original entanglement of these two things is a profoundly attractive one to the curious mind; the interested reader will find it very fully developed in that monumental work, Sir J. G. Frazer’s Golden Bough. It was an entanglement, we must remember, in the childish, dreaming, myth-making primitive mind; no reasoned process will explain it. But in that world of 12,000 to 20,000 years ago, it would seem that whenever seed time came round to the Neolithic peoples there was a human sacrifice. And it was not the sacrifice of any mean or outcast person; it was the sacrifice usually of a chosen youth or maiden, a youth more often who was treated with profound deference and even worship up to the moment of his immolation. He was a sort of sacrificial god-king, and all the details of his killing had become a ritual directed by the old, knowing men and sanctioned by the accumulated usage of ages.

At first primitive men, with only a very rough idea of the seasons, must have found great difficulty in determining when was the propitious moment for the seed-time sacrifice and the sowing. There is some reason for supposing that there was an early stage in human experience when men had no idea of a year. The first {68}chronology was in lunar months; it is supposed that the years of the Biblical patriarchs are really moons, and the Babylonian calendar shows distinct traces of an attempt to reckon seed time by taking thirteen lunar months to see it round. This lunar influence upon the calendar reaches down to our own days. If usage did not dull our sense of its strangeness we should think it a very remarkable thing indeed that the Christian Church does not commemorate the Crucifixion and Resurrection of Christ on the proper anniversaries but on dates that vary year by year with the phases of the moon.

It may be doubted whether the first agriculturalists made any observation of the stars. It is more likely that stars were first observed by migratory herdsmen, who found them a convenient mark of direction. But once their use in determining seasons was realized, their importance to agriculture became very great. The seed-time sacrifice was linked up with the southing or northing of some prominent star. A myth and worship of that star was for primitive man an almost inevitable consequence.

It is easy to see how important the man of knowledge and experience, the man who knew about the blood sacrifice and the stars, became in this early Neolithic world.

The fear of uncleanness and pollution, and the methods of cleansing that were advisable, constituted another source of power for the knowledgeable men and women. For there have always been witches as well as wizards, and priestesses as well as priests. The early priest was really not so much a {69}religious man as a man of applied science. His science was generally empirical and often bad; he kept it secret from the generality of men very jealously; but that does not alter the fact that his primary function was knowledge and that his primary use was a practical use.

Twelve or fifteen thousand years ago, in all the warm and fairly well-watered parts of the Old World these Neolithic human communities, with their class and tradition of priests and priestesses and their cultivated fields and their development of villages and little walled cities, were spreading. Age by age a drift and exchange of ideas went on between these communities. Eliot Smith and Rivers have used the term “Heliolithic culture” for the culture of these first agricultural peoples. “Heliolithic” (Sun and Stone) is not perhaps the best possible word to use for this, but until scientific men give us a better one we shall have to use it. Originating somewhere in the Mediterranean and western Asiatic area, it spread age by age eastward and from island to island across the Pacific until it may even have reached America and mingled with the more primitive ways of living of the Mongoloid immigrants coming down from the North.

Wherever the brownish people with the Heliolithic culture went they took with them all or most of a certain group of curious ideas and practices. Some of them are such queer ideas that they call for the explanation of the mental expert. They made pyramids {70}and great mounds, and set up great circles of big stones, perhaps to facilitate the astronomical observation of the priests; they made mummies of some or all of their dead; they tattooed and circumcized; they had the old custom, known as the couvade, of sending the father to bed and rest when a child was born, and they had as a luck symbol the well-known Swastika.

If we were to make a map of the world with dots to show how far these group practices have left their traces, we should make a belt along the temperate and sub-tropical coasts of the world from Stonehenge and Spain across the world to Mexico and Peru. But Africa below the equator, north central Europe, and north Asia would show none of these dottings; there lived races who were developing along practically independent lines.

[1] The term Palæolithic we may note is also used to cover the Neanderthaler and even the Eolithic implements. The pre-human age is called the “Older Palæolithic;” the age of true men using unpolished stones in the “Newer Palæolithic.”