V - The Age of the Coal Swamps 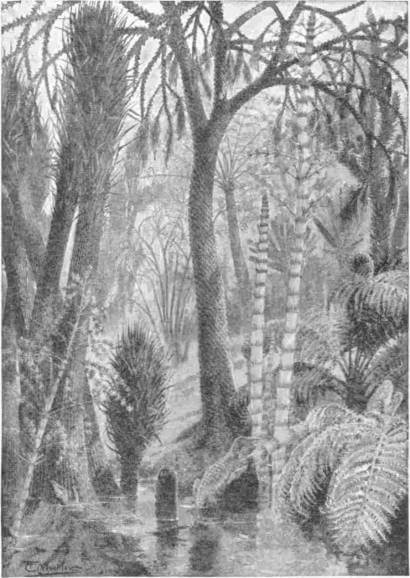 THE land during this Age of Fishes was apparently quite lifeless. Crags and uplands of barren rock lay under the sun and rain. There was no real soil—for as yet there were no earthworms which help to make a soil, and no plants to break up the rock particles into mould; there was no trace of moss or lichen. Life was still only in the sea.

Over this world of barren rock played great changes of climate. The causes of these changes of climate were very complex and they have still to be properly estimated. The changing shape of the earth’s orbit, the gradual shifting of the poles of rotation, changes in the shapes of the continents, probably even fluctuations in the warmth of the sun, now conspired to plunge great areas of the earth’s surface into long periods of cold and ice and now again for millions of years spread a warm or equable climate over this planet. There seem to have been phases of great internal activity in the world’s history, when in the course of a few million years accumulated upthrusts would break out in lines of volcanic eruption and upheaval and rearrange the mountain and continental outlines of the globe, increasing the depth of the sea and the height of the mountains and exaggerating the extremes of climate. And these would be followed by vast ages of comparative quiescence, when frost, rain and river would wear down the mountain heights and carry great masses of silt to fill and raise the sea bottoms and spread the seas, ever shallower and wider, over more and more of the land. There have been “high and deep” ages in the world’s history and “low and level” ages. The reader must dismiss from his mind any idea that the surface of the earth has been growing steadily cooler since its crust grew solid. After that much cooling had been achieved, the internal temperature ceased to affect surface {22}conditions. There are traces of periods of superabundant ice and snow, of “Glacial Ages,” that is, even in the Azoic period.

It was only towards the close of the Age of Fishes, in a period of extensive shallow seas and lagoons, that life spread itself out in any effectual way from the waters on to the land. No doubt the earlier types of the forms that now begin to appear in great abundance had already been developing in a rare and obscure manner for many scores of millions of years. But now came their opportunity.

Plants no doubt preceded animal forms in this invasion of the land, but the animals probably followed up the plant emigration {23}very closely. The first problem that the plant had to solve was the problem of some sustaining stiff support to hold up its fronds to the sunlight when the buoyant water was withdrawn; the second was the problem of getting water from the swampy ground below to the tissues of the plant, now that it was no longer close at hand. The two problems were solved by the development of woody tissue which both sustained the plant and acted as water carrier to the leaves. The Record of the Rocks is suddenly crowded by a vast variety of woody swamp plants, many of them of great size, big tree mosses, tree ferns, gigantic horsetails and the like. And with these, age by age, there crawled out of the water a great variety of animal forms. There were centipedes and millipedes; there were the first primitive insects; there were creatures related to the ancient king crabs and sea scorpions which became the earliest spiders and land scorpions, and presently there were vertebrated animals.

Some of the earlier insects were very large. There were dragon flies in this period with wings that spread out to twenty-nine inches.

In various ways these new orders and genera had adapted themselves to breathing air. Hitherto all animals had breathed air dissolved in water, and that indeed is what all animals still have to do. But now in divers fashions the animal kingdom was acquiring the power of supplying its own moisture where it was needed. A man with a perfectly dry lung would suffocate to-day; {24}his lung surfaces must be moist in order that air may pass through them into his blood. The adaptation to air breathing consists in all cases either in the development of a cover to the old-fashioned gills to stop evaporation, or in the development of tubes or other new breathing organs lying deep inside the body and moistened by a watery secretion. The old gills with which the ancestral fish of the vertebrated line had breathed were inadaptable to breathing upon land, and in the case of this division of the animal kingdom it is the swimming bladder of the fish which becomes a new, deep-seated breathing organ, the lung. The kind of animals known as amphibia, the frogs and newts of to-day, begin their lives in the water and breathe by gills; and subsequently the lung, developing in the same way as the swimming bladder of many fishes do, as a baglike outgrowth from the throat, takes over the business of breathing, the animal comes out on land, and the gills dwindle and the gill slits disappear. (All except an outgrowth of one gill slit, which becomes the passage of the ear and ear-drum.) The animal can now live only in the air, but it must return at least to the edge of the water to lay its eggs and reproduce its kind.

All the air-breathing vertebrata of this age of swamps and plants belonged to the class amphibia. They were nearly all of them forms related to the newts of to-day, and some of them attained a considerable size. They were land animals, it is true, but they were land animals needing to live in and near moist and swampy places, and all the great trees of this period were equally {25}amphibious in their habits. None of them had yet developed fruits and seeds of a kind that could fall on land and develop with the help only of such moisture as dew and rain could bring. They all had to shed their spores in water, it would seem, if they were to germinate.

It is one of the most beautiful interests of that beautiful science, comparative anatomy, to trace the complex and wonderful adaptations of living things to the necessities of existence in air. All living things, plants and animals alike, are primarily water things. For example all the higher vertebrated animals above the fishes, up to and including man, pass through a stage in their development in the egg or before birth in which they have gill slits which are obliterated before the young emerge. The bare, water-washed eye of the fish is protected in the higher forms from drying up by eyelids and glands which secrete moisture. The weaker sound vibrations of air necessitate an ear-drum. In nearly every organ of the body similar modifications and adaptations are to be detected, similar patchings-up to meet aerial conditions.

This Carboniferous age, this age of the amphibia, was an age of life in the swamps and lagoons and on the low banks among these waters. Thus far life had now extended. The hills and high lands were still quite barren and lifeless. Life had learnt to breathe air indeed, but it still had its roots in its native water; it still had to return to the water to reproduce its kind.