VII - The First Birds and the First Mammals 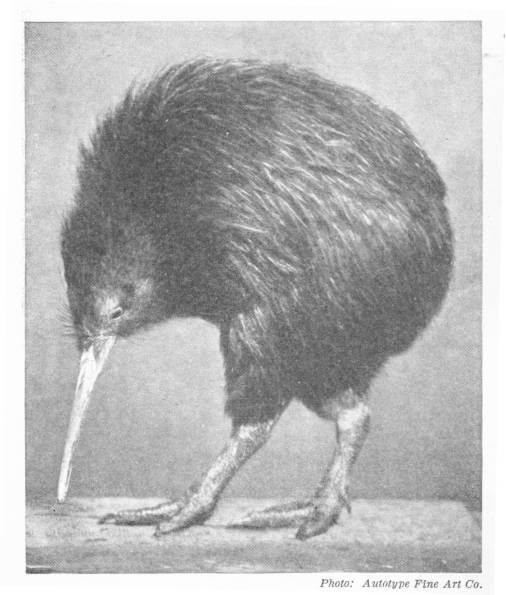 IN a few paragraphs a picture of the lush vegetation and swarming reptiles of that first great summer of life, the Mesozoic period, has been sketched. But while the Dinosaurs lorded it over the hot selvas and marshy plains and the Pterodactyls filled the forests with their flutterings and possibly with shrieks and croakings as they pursued the humming insect life of the still flowerless shrubs and trees, some less conspicuous and less abundant forms upon the margins of this abounding life were acquiring certain powers and learning certain lessons of endurance, that were to be of the utmost value to their race when at last the smiling generosity of sun and earth began to fade.

A group of tribes and genera of hopping reptiles, small creatures of the dinosaur type, seem to have been pushed by competition and the pursuit of their enemies towards the alternatives of extinction or adaptation to colder conditions in the higher hills or by the sea. Among these distressed tribes there was developed a new type of scale—scales that were elongated into quill-like forms and that presently branched into the crude beginnings of feathers. These quill-like scales layover one another and formed a heat-retaining covering more efficient than any reptilian covering that had hitherto existed. So they permitted an invasion of colder regions that were otherwise uninhabited. Perhaps simultaneously with these changes there arose in these creatures a greater solicitude for their eggs. Most reptiles are apparently quite careless about their eggs, which are left for sun and season to hatch. But some of the varieties upon this new branch of the tree of life were acquiring a habit of guarding their eggs and keeping them warm with the warmth of their bodies.

With these adaptations to cold other internal modifications {32}were going on that made these creatures, the primitive birds, warm-blooded and independent of basking. The very earliest birds seem to have been seabirds living upon fish, and their fore limbs were not wings but paddles rather after the penguin type. That peculiarly primitive bird, the New Zealand Ki-Wi, has feathers of a very simple sort, and neither flies nor appears to be descended from flying ancestors. In the development of the birds, feathers came before wings. But once the feather was developed the possibility of making a light spread of feathers led inevitably to the wing. We know of the fossil remains of one bird at least which had reptilian teeth in its jaw and a long reptilian tail, but which also had a true bird’s wing and which certainly flew and held its own among the pterodactyls of the Mesozoic time. Nevertheless birds were neither varied nor abundant in Mesozoic times. If a man could go back to typical Mesozoic country, he might walk for days and never see or hear such a thing as a bird, though he would see a great abundance of pterodactyls and insects among the fronds and reeds.

And another thing he would probably never see, and that would be any sign of a mammal. Probably the first mammals were in {33}existence millions of years before the first thing one could call a bird, but they were altogether too small and obscure and remote for attention.

The earliest mammals, like the earliest birds, were creatures driven by competition and pursuit into a life of hardship and adaptation to cold. With them also the scale became quill-like, and was developed into a heat-retaining covering; and they too underwent modifications, similar in kind though different in detail, to become warm-blooded and independent of basking. Instead of feathers they developed hairs, and instead of guarding and incubating their eggs they kept them warm and safe by retaining them inside their bodies until they were almost mature. Most of them became altogether vivaparous and brought their young into the world alive. And even after their young were born they tended to maintain a protective and nutritive association with them. Most {34}but not all mammals to-day have mammæ and suckle their young. Two mammals still live which lay eggs and which have not proper mammæ, though they nourish their young by a nutritive secretion of the under skin; these are the duck-billed platypus and the echidna. The echidna lays leathery eggs and then puts them into a pouch under its belly, and so carries them about warm and safe until they hatch.

But just as a visitor to the Mesozoic world might have searched for days and weeks before finding a bird, so, unless he knew exactly where to go and look, he might have searched in vain for any traces of a mammal. Both birds and mammals would have seemed very eccentric and secondary and unimportant creatures in Mesozoic times.

The Age of Reptiles lasted, it is now guessed, eighty million years. Had any quasi-human intelligence been watching the world through that inconceivable length of time, how safe and eternal the sunshine and abundance must have seemed, how assured the wallowing prosperity of the dinosaurs and the flapping abundance of the flying lizards! And then the mysterious rhythms and accumulating forces of the universe began to turn against that quasi-eternal stability. That run of luck {36}for life was running out. Age by age, myriad of years after myriad of years, with halts no doubt and retrogressions, came a change towards hardship and extreme conditions, came great alterations of level and great redistributions of mountain and sea. We find one thing in the Record of the Rocks during the decadence of the long Mesozoic age of prosperity that is very significant of steadily sustained changes of condition, and that is a violent fluctuation of living forms and the appearance of new and strange species. Under the gathering threat of extinction the older orders and genera are displaying their utmost capacity for variation and adaptation. The Ammonites for example in these last pages of the Mesozoic chapter exhibit a multitude of fantastic forms. Under settled conditions there is no encouragement for novelties; they do not develop, they are suppressed; what is best adapted is already there. Under novel conditions it is the ordinary type that suffers, and the novelty that may have a better chance to survive and establish itself....

There comes a break in the Record of the Rocks that may represent several million years. There is a veil here still, over even the outline of the history of life. When it lifts again, the Age of Reptiles is at an end; the Dinosaurs, the Plesiosaurs and Ichthyosaurs, the Pterodactyls, the innumerable genera and species of Ammonite have all gone absolutely. In all their stupendous variety they have died out and left no descendants. The cold has killed them. All their final variations were insufficient; they had never hit upon survival conditions. The world had passed through a phase of extreme conditions beyond their powers of endurance, a slow and complete massacre of Mesozoic life has occurred, and we find now a new scene, a new and hardier flora, and a new and hardier fauna in possession of the world.

It is still a bleak and impoverished scene with which this new volume of the book of life begins. The cycads and tropical conifers have given place very largely to trees that shed their leaves to avoid destruction by the snows of winter and to flowering plants and shrubs, and where there was formerly a profusion of reptiles, an increasing variety of birds and mammals is entering into their inheritance.