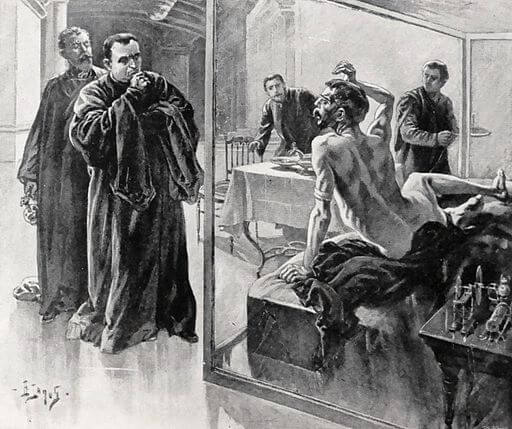 But Warming was wrong in that. An awakening came.

What a wonderfully complex thing! this simple seeming unity -- the self! Who can trace its reintegration as morning after morning we awaken, the flux and confluence of its countless factors interweaving, rebuilding, the dim first stirrings of the soul, the growth and synthesis of the unconscious to the subconscious, the sub-conscious to dawning consciousness, until at last we recognise ourselves again. And as it happens to most of us after the night's sleep, so it was with Graham at the end of his vast slumber. A dim cloud of sensation taking shape, a cloudy dreariness, and he found himself vaguely somewhere, recumbent, faint, but alive.

The pilgrimage towards a personal being seemed to traverse vast gulfs, to occupy epochs. Gigantic

dreams that were terrible realities at the time, left vague perplexing memories, strange creatures, strange scenery, as if from another planet. There was a distinct impression, too, of a momentous conversation, of a name -- he could not tell what name -- that was subsequently to recur, of some queer long-forgotten sensation of vein and muscle, of a feeling of vast hopeless effort, the effort of a man near drowning in darkness. Then came a panorama of dazzling unstable confluent scenes.

Graham became aware his eyes were open and regarding some unfamiliar thing.

It was something white, the edge of something, a frame of wood. He moved his head slightly, following the contour of this shape. It went up beyond the top of his eyes. He tried to think where he might be. Did it matter, seeing he was so wretched? The colour of his thoughts was a dark depression. He felt the featureless misery of one who wakes towards the hour of dawn. He had an uncertain sense of whispers and footsteps hastily receding.

The movement of his head involved a perception of extreme physical weakness. He supposed he was in bed in the hotel at the place in the valley -- but he could not recall that white edge. He must have slept. He remembered now that he had wanted to sleep. He recalled the cliff and waterfall again, and then recollected something about talking to a passer-by.

How long had he slept? What was that sound of pattering feet? And that rise and fall, like the murmur of breakers on pebbles? He put out a languid hand to reach his watch from the chair whereon it was his habit to place it, and touched some smooth hard surface like glass. This was so unexpected that it startled him extremely. Quite suddenly he rolled over, stared for a moment, and struggled into a sitting position. The effort was unexpectedly difficult, and it left him giddy and weak -- and amazed.

He rubbed his eyes. The riddle of his surroundings was confusing but his mind was quite clear -- evidently his sleep had benefited him. He was not in a bed at all as he understood the word, but lying naked on a very soft and yielding mattress, in a trough of dark glass. The mattress was partly transparent, a fact he observed with a strange sense of insecurity, and below it was a mirror reflecting him greyly. About his arm -- and he saw with a shock that his skin was strangely dry and yellow -- was bound a curious apparatus of rubber, bound so cunningly that it seemed to pass into his skin above and below. And this strange bed was placed in a case of greenish coloured glass (as it seemed to him), a bar in the white framework of which had first arrested his attention. In the corner of the case was a stand of glittering and delicately made apparatus, for the most part quite strange appliances, though a maximum and minimum thermometer was recognisable.

The slightly greenish tint of the glass-like substance which surrounded him on every hand obscured what lay behind, but he perceived it was a vast apartment of splendid appearance, and with a very large and simple white archway facing him. Close to the walls of the cage were articles of furniture, a table covered with a silvery cloth, silvery like the side of a fish, a couple of graceful chairs, and on the table a number of dishes with substances piled on them, a bottle and two glasses. He realised that he was intensely hungry.

He could see no human being, and after a period of hesitation scrambled off the translucent mattress and tried to stand on the clean white floor of his little apartment. He had miscalculated his strength, however, and staggered and put his hand against the glasslike pane before him to steady himself. For a moment it resisted his hand, bending outward like a distended bladder, then it broke with a slight report and vanished -- a pricked bubble. He reeled out into the general space of the hall, greatly astonished. He caught at the table to save himself, knocking one of the glasses to the floor -- it rang but did not break -- and sat down in one of the armchairs.

When he had a little recovered he filled the remaining glass from the bottle and drank -- a colourless liquid it was, but not water, with a pleasing faint aroma and taste and a quality of immediate support and stimulus. He put down the vessel and looked about him.

The apartment lost none of its size and magnificence now that the greenish transparency that had intervened was removed. The archway he saw led to a flight of steps, going downward without the intermediation of a door, to a spacious transverse passage. This passage ran between polished pillars of some white-veined substance of deep ultramarine, and along it came the sound of human movements and voices and a deep undeviating droning note. He sat, now fully awake, listening alertly, forgetting the viands in his attention.

Then with a shock he remembered that he was naked, and casting about him for covering, saw a long black robe thrown on one of the chairs beside him. This he wrapped about him and sat down again, trembling.

His mind was still a surging perplexity. Clearly he had slept. and had been removed in his sleep. But here? And who were those people, the distant crowd beyond the deep blue pillars? Boscastle? He poured out and partially drank another glass of the colourless fluid.

What was this place? -- this place that to his senses seemed subtly quivering like a thing alive? He looked about him at the clean and beautiful form of the apartment, unstained by ornament, and saw that the roof was broken in one place by a circular shaft full of light, and, as he looked, a steady, sweeping shadow blotted it out and passed, and came again and passed. "Beat, beat," that sweeping shadow had a note of its own in the subdued tumult that filled the air.

He would have called out, but only a little sound came into his throat. Then he stood up, and, with the uncertain steps of a drunkard, made his way towards the archway. He staggered down the steps, tripped on the corner of the black cloak he had wrapped about himself, and saved himself by catching at one of the blue pillars.

The passage ran down a cool vista of blue and purple, and ended remotely in a railed space like a balcony, brightly lit and projecting into a space of haze, a space like the interior of some gigantic building. Beyond and remote were vast and vague architectural forms. The tumult of voices rose now loud and clear, and on the balcony and with their backs to him, gesticulating and apparently in animated conversation, were three figures, richly dressed in loose and easy garments of bright soft colourings. The noise of a great multitude of people poured up over the balcony, and once it seemed the top of a banner passed, and once some brightly coloured object, a pale blue cap or garment thrown up into the air perhaps, flashed athwart the space and fell. The shouts sounded like English, there was a reiteration of "Wake!" He heard some indistinct shrill cry, and abruptly the three men began laughing.

He turned his eyes full of merriment along the passage. His face changed, the whole man changed, became rigid. The other two turned swiftly at his exclamation and stood motionless. Their faces assumed an expression of consternation, an expression that deepened into awe.

Suddenly Graham's knees bent beneath him, his arm against the pillar collapsed limply, he staggered forward and fell upon his face.