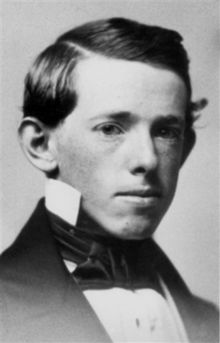 Horatio Alger, Jr. (1832-1899) was born in Chelsea, Massachusetts, best known for his "rags-to-riches" stories, in which a young boy is rewarded for hard work, escapes from poverty through an act of bravery or kindness and is rewarded by some wealthy or powerful patron. Becoming popular following the ravages of the U.S. Civil War, this message resonated with readers for its popular message. Ragged Dick (1868) was his most popular novel, following the serialized stories in Student and Schoolmate in 1867. Many people mistakenly thought Alger was writing about his own background, but he grew up decidedly well-off. The "Horatio Alger myth" endures as an American cultural reference, because sometimes valiant hard work and well-deserving effort doesn't get rewarded, as it did in his stories.

Alger went to Harvard, became a professional writer in 1849, selling two essays and a poem. He attended Harvard Divinity School briefly, but dropped out and took a job as editor of a Boston newspaper. He continued to write, inspired by the works of Sir Walter Scott, James Fenimore Cooper and Herman Melville. His greatest inspiration was Henry Wadsworth Longfellow, one of his professors at Harvard, whose prose was reflected in Alger's writing. Alger became a minister, in charge of youth activities programs. In 1861 he was drafted to fight in the Civil War, but was exempt from service. He adopted two troubled boys, which may have inspired some of his work, which include Bound to Rise and Frank's Campaign or the Farm and the Camp.

Alger moved to New York in 1866, where he tutored the town's aristocratic youth and rehabilitated its street boys, which clearly inspired his writing. Alger's popularity waned, as he recycled his themes in various settings, followed by his work becaming more sensational, including more violence, which caused some librarians to question whether his juvenile fiction was appropriate for the young. The controversy of whether to remove Alger's works from public collections was stymied after his death in 1899.

Since 1947, Alger's legacy is best remembered in the prestigious scholarship award for deserving youth named in his honor, the Horatio Alger Association of Distinguished Americans.