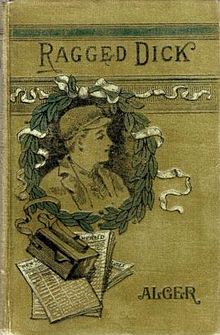 Ragged Dick; or, Street Life in New York with the Boot Blacks (1868) was Alger's most popular novel, following the popular serialized version published in Student and Schoolmate in 1867. His most popular "rags-to-riches" story, what became an iconic symbol of "the American Dream," is a lesson to encourage young man to apply themselves to valiant work, because it might just be rewarded by a wealthy patron, making it all worthwhile. The phrase "Horatio Alger myth" comes from this idea that sometimes hard work isn't rewarded, even though it's well-deserving. The theme would be Alger's mantra throughout his writing career, flagging in popularity due to its redundancy. Same story, different settings. The term "boot black" means shoe shiner, a popular job for scrappy young men needing work in New York City at the time Alger resided there. [Book cover pictured is the 1895 edition.] 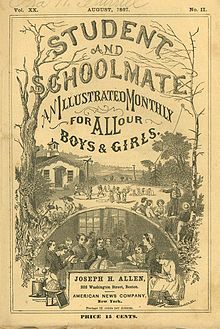 Chapter I - Ragged Dick is Introduced to the Reader

Chapter IX - A Scene in A Third Avenue Car

Chapter XI - Dick As a Detective

Chapter XIV - A Battle and a Victory

Return to the Horatio Alger library.