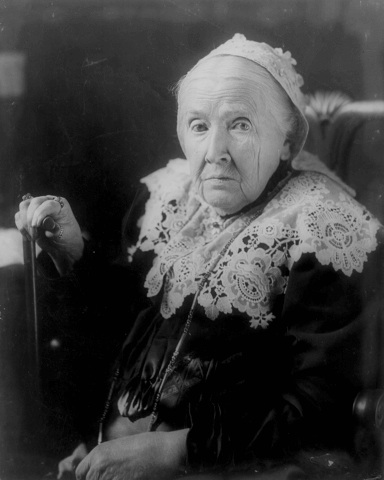 Julia Ward Howe (1819 - 1910) was an American poet, abolitionist and women's rights activist best known for her poem/song, The Battle Hymn of the Republic, written in 1862, a year after Americans began fighting in the Civil War.

She grew up in New York City, the fourth of seven children in a well-to-do, strict Calvinist family. Her mother, a poet, died when Julia was five. She had access to a vast library of modern literature her brother brought from Europe, and her family's acquaintances included Charles Dickens, Margaret Fuller, and Charles Sumner. Howe moved to Boston and married Samuel Gridley Howe in 1843 who was a physician, reformer, and founder of the Perkins School for the Blind. They raised six children in South Boston; she gave birth to the youngest when she was forty years old. Her daughter, author Laura E. Richards, wrote ninety books and numerous children's stories, and won the Pulitzer Prize in 1917, along with her sister, Maud Howe Elliott, for their biography of their mother, Julia Ward Howe (1819 - 1910).

Howe studied languages, attended lectures and began to write extensively. Her first poetry collection published in 1853 was intensely personal, entitled Passion-Flowers. She wrote an anonymous collection and several plays, all which hinted at her stifling marriage. She traveled extensively and in 1860 published a book, A Trip to Cuba. It received criticism from abolitionists for its derogatory views on blacks. Though she supported freeing the slaves and considered herself an abolitionist, Ms. Howe did not agree they should receive equal rights. She had a troubled marriage, separated from Samuel in 1852, he died in 1876.

Howe was inspired to write The Battle Hymn of the Republic after she and her husband visited Washington, DC in 1861 and met with President Abraham Lincoln. Her friend, James Freeman Clarke suggested she re-write the words to John Brown's Body, which she did, and it was set to William Steffe's music. It was published in The Atlantic Monthly in February, 1862 and became the most popular song for the Union during the American Civil War. With her new-found fame, she published highly influential works supporting pacifism and women's suffrage. Howe founded the New England Woman Suffrage Association, presided over the Association of American Women, and was the first woman to be elected to the American Academy of Arts and Letters.

Howe is featured in our Feminist Literature - Study Guide

A Trip to Cuba

A Thought for Washing Day
He Gave the Mother's Chastened Heart
I Have Made a Voyage Upon a Golden River
In Music Hall
Limitations of Benevolence
Methinks My Friends Grow Beauteous in My Sight
Mother's Day Proclamation
Our Country
Rouge Gagne
The Battle Hymn of the Republic
The Bee's Song
The Flag
The Rough Sketch
These Are My People, Quaint and Ancient
The Word
Women Who Weave in Hope the Daily Web