I - A Little Snow Bird 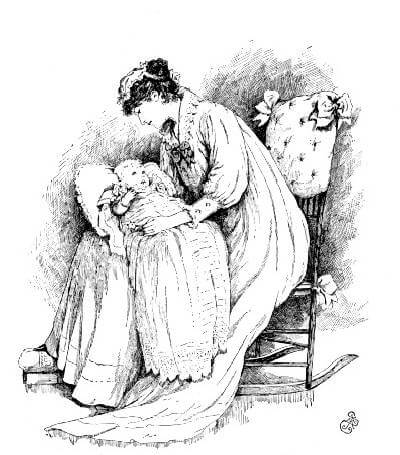 t was very early Christmas morning, and in the stillness of the dawn, with the soft snow falling on the house-tops, a little child was born in the Bird household.

They had intended to name the baby Lucy, if it were a girl; but they had not expected her on Christmas morning, and a real Christmas baby was not to be lightly named—the whole family agreed in that.

They were consulting about it in the nursery. Mr. Bird said that he had assisted in naming the three boys, and that he should leave this matter entirely to Mrs. Bird; Donald wanted the child called "Dorothy," after a pretty, curly-haired girl who sat next him in school; Paul choose "Luella," for Luella was the nurse who had been with him during his whole babyhood, up to the time of his first trousers, and the name suggested all sorts of comfortable things. Uncle Jack said that the first girl should always be named for her mother, no matter how hideous the name happened to be.

Grandma said that she would prefer not to take any part in the discussion, and everybody suddenly remembered that Mrs. Bird had thought of naming the baby Lucy, for Grandma herself; and, while it would be indelicate for her to favor that name, it would be against human nature for her to suggest any other, under the circumstances.

Hugh, the "hitherto baby," if that is a possible term, sat in one corner and said nothing, but felt, in some mysterious way, that his nose was out of joint; for there was a newer baby now, a possibility he had never taken into consideration; and the "first girl," too,—a still higher development of treason, which made him actually green with jealousy.

But it was too profound a subject to be settled then and there, on the spot; besides, Mamma had not been asked, and everybody felt it rather absurd, after all, to forestall a decree that was certain to be absolutely wise, just, and perfect.

The reason that the subject had been brought up at all so early in the day lay in the fact that Mrs. Bird never allowed her babies to go over night unnamed. She was a person of so great decision of character that she would have blushed at such a thing; she said that to let blessed babies go dangling and dawdling about without names, for months and months, was enough to ruin them for life. She also said that if one could not make up one's mind in twenty-four hours it was a sign that—But I will not repeat the rest, as it might prejudice you against the most charming woman in the world.

So Donald took his new velocipede and went out to ride up and down the stone pavement and notch the shins of innocent people as they passed by, while Paul spun his musical top on the front steps.

But Hugh refused to leave the scene of action. He seated himself on the top stair in the hall, banged his head against the railing a few times, just by way of uncorking the vials of his wrath, and then subsided into gloomy silence, waiting to declare war if more "first girl babies" were thrust upon a family already surfeited with that unnecessary article.

Meanwhile dear Mrs. Bird lay in her room, weak, but safe and happy, with her sweet girl baby by her side and the heaven of motherhood opening again before her. Nurse was making gruel in the kitchen, and the room was dim and quiet. There was a cheerful open fire in the grate, but though the shutters were closed, the side windows that looked out on the Church of Our Saviour, next door, were a little open.

Suddenly a sound of music poured out into the bright air and drifted into the chamber. It was the boy choir singing Christmas anthems. Higher and higher rose the clear, fresh voices, full of hope and cheer, as children's voices always are. Fuller and fuller grew the burst of melody as one glad strain fell upon another in joyful harmony:—

One verse followed another, always with the same sweet refrain:—

Mrs. Bird thought, as the music floated in upon her gentle sleep, that she had slipped into heaven with her new baby, and that the angels were bidding them welcome. But the tiny bundle by her side stirred a little, and though it was scarcely more than the ruffling of a feather, she awoke; for the mother-ear is so close to the heart that it can hear the faintest whisper of a child.

She opened her eyes and drew the baby closer. It looked like a rose dipped in milk, she thought, this pink and white blossom of girlhood, or like a pink cherub, with its halo of pale yellow hair, finer than floss silk.

"Why, my baby," whispered Mrs. Bird in soft surprise, "I had forgotten what day it was. You are a little Christmas child, and we will name you 'Carol'—mother's Christmas Carol!"

"What!" said Mr. Bird, coming in softly and closing the door behind him.

"Why, Donald, don't you think 'Carol' is a sweet name for a Christmas baby? It came to me just a moment ago in the singing, as I was lying here half asleep and half awake."

"I think it is a charming name, dear heart, and sounds just like you, and I hope that, being a girl, this baby has some chance of being as lovely as her mother;"—at which speech from the baby's papa Mrs. Bird, though she was as weak and tired as she could be, blushed with happiness.

And so Carol came by her name.

Of course, it was thought foolish by many people, though Uncle Jack declared laughingly that it was very strange if a whole family of Birds could not be indulged in a single Carol; and Grandma, who adored the child, thought the name much more appropriate than Lucy, but was glad that people would probably think it short for Caroline.

Perhaps because she was born in holiday time, Carol was a very happy baby. Of course, she was too tiny to understand the joy of Christmas-tide, but people say there is everything in a good beginning, and she may have breathed in unconsciously the fragrance of evergreens and holiday dinners; while the peals of sleigh-bells and the laughter of happy children may have fallen upon her baby ears and wakened in them a glad surprise at the merry world she had come to live in.

Her cheeks and lips were as red as holly-berries; her hair was for all the world the color of a Christmas candle-flame; her eyes were bright as stars; her laugh like a chime of Christmas-bells, and her tiny hands forever outstretched in giving.

Such a generous little creature you never saw! A spoonful of bread and milk had always to be taken by Mamma or nurse before Carol could enjoy her supper; whatever bit of cake or sweetmeat found its way into her pretty fingers was straightway broken in half to be shared with Donald, Paul, or Hugh; and when they made believe nibble the morsel with affected enjoyment, she would clap her hands and crow with delight.

"Why does she do it?" asked Donald thoughtfully. "None of us boys ever did."

"I hardly know," said Mamma, catching her darling to her heart, "except that she is a little Christmas child, and so she has a tiny share of the blessedest birthday the world ever knew!"