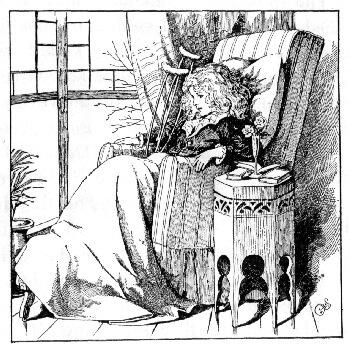 Carol herself knew nothing of motherly tears and fatherly anxieties; she lived on peacefully in the room where she was born.

But you never would have known that room; for Mr. Bird had a great deal of money, and though he felt sometimes as if he wanted to throw it all in the sea, since it could not buy a strong body for his little girl, yet he was glad to make the place she lived in just as beautiful as it could be.

The room had been extended by the building of a large addition that hung out over the garden below, and was so filled with windows that it might have been a conservatory. The ones on the side were thus still nearer the Church of Our Saviour than they used to be; those in front looked out on the beautiful harbor, and those in the back commanded a view of nothing in particular but a narrow alley; nevertheless, they were pleasantest of all to Carol, for the Ruggles family lived in the alley, and the nine little, middle-sized, and big Ruggles children were a source of inexhaustible interest.

The shutters could all be opened and Carol could take a real sun-bath in this lovely glass house, or they could all be closed when the dear head ached or the dear eyes were tired. The carpet was of soft gray, with clusters of green bay and holly leaves. The furniture was of white wood, on which an artist had painted snow scenes and Christmas trees and groups of merry children ringing bells and singing carols.

Donald had made a pretty, polished shelf, and screwed it on the outside of the foot-board, and the boys always kept this full of blooming plants, which they changed from time to time; the head-board, too, had a bracket on either side, where there were pots of maiden-hair ferns.

Love-birds and canaries hung in their golden houses in the windows, and they, poor caged things, could hop as far from their wooden perches as Carol could venture from her little white bed.

This was Carol's "Circulating Library." Every Saturday she chose ten books, jotting their names down in a diary; into these she slipped cards that said:—

"Please keep this book two weeks and read it.

Then Mrs. Bird stepped into her carriage and took the ten books to the Children's Hospital, and brought home ten others that she had left there the fortnight before.

This was a source of great happiness; for some of the Hospital children that were old enough to print or write, and were strong enough to do it, wrote Carol sweet little letters about the books, and she answered them, and they grew to be friends. (It is very funny, but you do not always have to see people to love them. Just think about it, and tell me if it isn't so.)

There was a high wainscoting of wood about the room, and on top of this, in a narrow gilt framework, ran a row of illuminated pictures, illustrating fairy tales, all in dull blue and gold and scarlet and silver. From the door to the closet there was the story of "The Fair One with Golden Locks;" from closet to bookcase, ran "Puss in Boots;" from bookcase to fireplace, was "Jack the Giant-killer;" and on the other side of the room were "Hop o' my Thumb," "The Sleeping Beauty," and "Cinderella."

Then there was a great closet full of beautiful things to wear, but they were all dressing-gowns and slippers and shawls; and there were drawers full of toys and games, but they were such as you could play with on your lap. There were no ninepins, nor balls, nor bows and arrows, nor bean bags, nor tennis rackets; but, after all, other children needed these more than Carol Bird, for she was always happy and contented, whatever she had or whatever she lacked; and after the room had been made so lovely for her, on her eighth Christmas, she always called herself, in fun, a "Bird of Paradise."

On these particular December days she was happier than usual, for Uncle Jack was coming from England to spend the holidays. Dear, funny, jolly, loving, wise Uncle Jack, who came every two or three years, and brought so much joy with him that the world looked as black as a thunder-cloud for a week after he went away again.

The mail had brought this letter:—

London, November 28, 188-. Wish you merry Christmas, you dearest birdlings in America! Preen your feathers, and stretch the Birds' nest a trifle, if you please, and let Uncle Jack in for the holidays. I am coming with such a trunk full of treasures that you'll have to borrow the stockings of Barnum's Giant and Giantess; I am coming to squeeze a certain little lady-bird until she cries for mercy; I am coming to see if I can find a boy to take care of a black pony that I bought lately. It's the strangest thing I ever knew; I've hunted all over Europe, and can't find a boy to suit me! I'll tell you why. I've set my heart on finding one with a dimple in his chin, because this pony particularly likes dimples! ["Hurrah!" cried Hugh; "bless my dear dimple; I'll never be ashamed of it again."]

Please drop a note to the clerk of the weather, and have a good, rousing snow-storm—say on the twenty-second. None of your meek, gentle, nonsensical, shilly-shallying snow-storms; not the sort where the flakes float lazily down from the sky as if they didn't care whether they ever got here or not and then melt away as soon as they touch the earth, but a regular business-like whizzing, whirring, blurring, cutting snow-storm, warranted to freeze and stay on!

I should like rather a LARGE Christmas tree, if it's convenient: not one of those "sprigs," five or six feet high, that you used to have three or four years ago, when the birdlings were not fairly feathered out; but a tree of some size. Set it up in the garret, if necessary, and then we can cut a hole in the roof if the tree chances to be too high for the room.

Tell Bridget to begin to fatten a turkey. Tell her that by the twentieth of December that turkey must not be able to stand on its legs for fat, and then on the next three days she must allow it to recline easily on its side, and stuff it to bursting. (One ounce of stuffing beforehand is worth a pound afterwards.)

The pudding must be unusually huge, and darkly, deeply, lugubriously blue in color. It must be stuck so full of plums that the pudding itself will ooze out into the pan and not be brought on to the table at all. I expect to be there by the twentieth, to manage these little things myself,—remembering it is the early Bird that catches the worm,—but give you the instructions in case I should be delayed.

And Carol must decide on the size of the tree—she knows best, she was a Christmas child; and she must plead for the snow-storm—the "clerk of the weather" may pay some attention to her; and she must look up the boy with the dimple for me—she's likelier to find him than I am, this minute. She must advise about the turkey, and Bridget must bring the pudding to her bedside and let her drop every separate plum into it and stir it once for luck, or I'll not eat a single slice—for Carol is the dearest part of Christmas to Uncle Jack, and he'll have none of it without her. She is better than all the turkeys and puddings and apples and spare-ribs and wreaths and garlands and mistletoe and stockings and chimneys and sleigh-bells in Christendom! She is the very sweetest Christmas Carol that was ever written, said, sung, or chanted, and I am coming as fast as ships and railway trains can carry me, to tell her so.

Carol's joy knew no bounds. Mr. and Mrs. Bird laughed like children and kissed each other for sheer delight, and when the boys heard it they simply whooped like wild Indians; until the Ruggles family, whose back yard joined their garden, gathered at the door and wondered what was "up" in the big house.