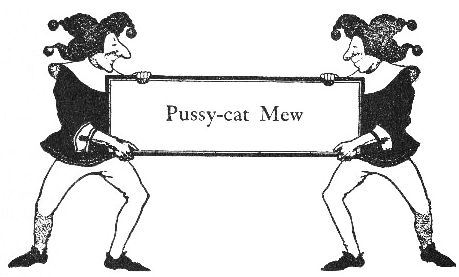 Pussy-cat, Pussy-cat, where do you go?
To London, to visit the palace, you know.
Pussy-cat Mew, wily you come back again?
Oh, yes! I 'll scamper with might and with main!

Pussy-cat Mew set off on her way,
Stepping quite softly and feeling quite gay.
Smooth was the road, so she traveled at ease,
Warmed by the sunshine and fanned by the breeze.

Over the hills to the valleys below,
Through the deep woods where the soft mosses grow,
Skirting the fields, with buttercups dotted,
Swiftly our venturesome Pussy-cat trotted.

Sharp watch she kept when a village she neared,
For boys and their mischief our Pussy-cat feared!
Often she crept through the grasses so deep
To pass by a dog that was lying asleep.

Once, as she walked through a sweet-clover field,
Something beside her affrightedly squealed,
And swift from her path there darted away
A tiny field-mouse, with a coat of soft gray.

"Nowhere," thought our Pussy, "is chance for a dinner;
The one that runs fastest must surely be winner!"
So quickly she started the mouse to give chase,
And over the clover they ran a great race.

But just when it seemed that Pussy would win,
The mouse spied a hole and quickly popped in;
And so he escaped, for the hole was so small
That Pussy-cat could n't squeeze in it at all.

So, softly she crouched, and with eyes big and round
Quite steadily watched that small hole in the ground
"This mouse really thinks he 's escaped me," she said,
"But I 'll catch him sure if he sticks out his head!"

But while she was watching the poor mouse's plight,
A deep growl behind made her jump with affright;
She gave a great cry, and then started to run
As swift as a bullet that 's shot from a gun!

"Meow! Oh, meow "our poor Puss did say;
"Bow-wow!" cried the dog, who was not far away.
O'er meadows and ditches they scampered apace,
O'er fences and hedges they kept up the race!

Then Pussy-cat Mew saw before her a tree,
And knew that a safe place of refuge 't would be;
So far up the tree with a bound she did go,
And left the big dog to growl down below.

But now, by good fortune, a man came that way,
And called to the dog, who was forced to obey;
But Puss did not come down the tree till she knew
That the man and the dog were far out of view.

Pursuing her way, at nightfall she came
To London, a town you know well by name;
And wandering 'round in byway and street,
A strange Pussy-cat she happened to meet.

"Good evening," said Pussy-cat Mew. "Can you tell
In which of these houses the Queen may now dwell?
I 'm a stranger in town, and I 'm anxious to see
What sort of a person a real Queen may be."

"My friend," said the other, "you really must know
It is n't permitted that strangers should go
Inside of the palace, unless they 're invited,
And stray Pussy-cats are apt to be slighted.

"By good luck, however, I 'm quite well aware
Of a way to the palace by means of a stair
That never is guarded; so just come with me,
And a glimpse of the Queen you shall certainly see."

Puss thanked her new friend, and together they stole
To the back of the palace, and crept through a hole
In the fence, and quietly came to the stair
Which the stranger Pussy-cat promised was there.

"Now here I must leave you," the strange Pussy said,
"So do n't be 'fraid-cat, but go straight ahead,
And do n't be alarmed if by chance you are seen,
For people will think you belong to the Queen."

So Pussy-cat Mew did as she had been told,
And walked through the palace with manner so bold
She soon reached the room where the Queen sat in state,
Surrounded by lords and by ladies so great.

And there in the corner our Pussy sat down,
And gazed at the scepter and blinked at the crown,
And eyed the Queen's dress, all purple and gold;
Which was surely a beautiful sight to behold.

But all of a sudden she started, for there
Was a little gray mouse, right under the chair
Where her Majesty sat, and Pussy well knew
She 'd scream with alarm if the mouse met her view.

So up toward the chair our Pussy-cat stole,
But the mouse saw her coming and ran for its hole;
But Pussy ran after, and during the race
A wonderful, terrible panic took place!

The ladies all jumped on their chairs in alarm,
The lords drew their swords to protect them from harm,
And the Queen gave a scream and fainted away--
A very undignified act, I must say.

But Pussy-cat Mew was so awfully scared
By the shouting and screaming, no longer she dared
To stay in the room; so without more delay
She rushed from the palace and scampered away!

So bristling her fur, and with heart beating fast,
She came to the road leading homeward at last.
"What business," she thought, "has a poor country cat
To visit a city of madmen like that?

"Straight homeward I 'll go, where I am well fed,
Where mistress is kind, and soft is my bed;
Let other cats travel, if they wish to roam,
But as for myself, I shall now stay at home."

And now over hills and valleys she ran,
And journeyed as fast as a Pussy-cat can;
Till just as the dawn of the day did begin
She, safely at home, stole quietly in.

Return to the L. Frank Baum Home Page, or . . . Read the next short story; Sing A Song O' Sixpence