The Flying Girl
The Life and Adventures of Santa Claus
The Master Key: An Electrical Fairy Tale
The Wonderful Wizard of Oz

A Kidnapped Santa Claus
Hickory, Dickory, Dock
How The Beggars Came To Town
Humpty Dumpty
Jack Pumpkinhead and the Sawhorse
Little Bo-Peep
Little Bun Rabbit
Little Dorothy and Toto
Little Miss Muffet
Mistress Mary
Old King Cole
Ozma and the Little Wizard
Pussy-cat Mew
Sing A Song O' Sixpence
The Black Sheep
The Box of Robbers
The Capture of Father Time
The Cat And The Fiddle
The Cowardly Lion and the Hungry Tiger
The Dummy That Lived
The Enchanted Types
The Girl Who Owned a Bear
The Glass Dog
The Jolly Miller
The King of the Polar Bears
The Laughing Hippopotamus
The Little Man And His Little Gun
The Magic Bon Bons
The Mandarin and the Butterfly
The Man In The Moon
The Queen of Quok
The Scarecrow and The Tin Woodman
The Story Of Little Boy Blue
The Story Of Tommy Tucker
The Woggle-Bug Book
The Woman Who Lived In a Shoe
The Wonderful Pump
The Wond'rous Wise Man
Three Wise Men Of Gotham
Tiktok and the Nome King
Tom, the Piper's Son
What Jack Horner Did

L. Frank Baum, an American author best known for writing The Wizard of Oz (1900), wrote 55 other novels, 83 short stories, and over 200 poems. Born in Chittenango, New York in 1856, his father was a wealthy Pennsylvania oil fields owner. Baum was sent to the Peekskill Military Academy when we was 12 years old, in an attempt to curb his daydreaming, sickly ways.

Baum established an early interest in writing and was fascinated by printing. His father bought him a cheap printing press with which he and his brothers published and sold issues of their own home journal which included advertising, At the age of 20, Baum became a breeder of fancy poultry, a national craze at the time. He raised Hamburg chickens, established a trade journal, The Poultry Record and wrote a book, the complete history and guide for raising Hamburg chickens. 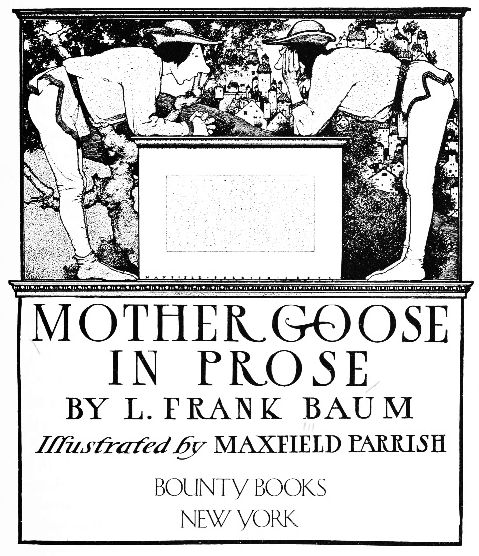 Baum published his first book, Mother Goose in Prose in 1897, a collection of Mother Goose rhymes written as prose stories, in which he modernized the characters. He was able to quit his door-to-door sales job because of its moderate success. Baum married and moved with his wife to the Dakota Territory in 1888, clearly having witnessed plenty of twisters to inspire the setting of his most famous works. Baum's version of Oz, where characters like the scarecrow and tin woodman can be morbid and violent, is quite a contrast to the more tempered and idyllic characters featured in the world renowned movie and spin-off productions. The political commentary in Baum's work has been extensively analyzed. Many of Baum's short story titles sound quite familiar and are worth reading to explore a different side of Baum's familiar characters, all published in 1913:

Because of his lifelong love of theatre, Baum financed elaborate musicals throughout his career, leading to significant debts that required him to sell the royalties for many of his earlier works. Though Baum tried to devote himself to other works of fantasy fiction, including A Kidnapped Santa Claus, he was persuaded by popular demand, particularly by letters from children, to return to writing about his most successful and familiar Land of Oz, again and again. Even so, his other works remained very popular after his death in 1919.