The Cat And The Fiddle 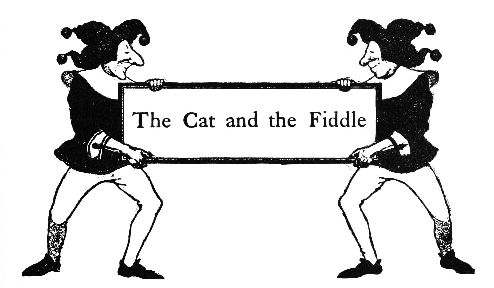 Perhaps you think this verse is all nonsense, and that the things it mentions could never have happened; but they did happen, as you will understand when I have explained them all to you clearly.

Little Bobby was the only son of a small farmer who lived out of town upon a country road. Bobby's mother looked after the house and Bobby's father took care of the farm, and Bobby himself, who was not very big, helped them both as much as he was able.

It was lonely upon the farm, especially when his father and mother were both busy at work, but the boy had one way to amuse himself that served to pass many an hour when he would not otherwise have known what to do. He was very fond of music, and his father one day brought him from the town a small fiddle, or violin, which he soon learned to play upon. I don't suppose he was a very fine musician, but the tunes he played pleased himself; as well as his father and mother, and Bobby's fiddle soon became his constant companion.

One day in the warm summer the farmer and his wife determined to drive to the town to sell their butter and eggs and bring back some groceries in exchange for them, and while they were gone Bobby was to be left alone.

"We shall not be back till late in the evening," said his mother, "for the weather is too warm to drive very fast. But I have left you a dish of bread and milk for your supper, and you must be a good boy and amuse yourself with your fiddle until we return."

Bobby promised to be good and look after the house, and then his father and mother climbed into the wagon and drove away to the town.

The boy was not entirely alone, for there was the big black tabby-cat lying upon the floor in the kitchen, and the little yellow dog barking at the wagon as it drove away, and the big moolie-cow lowing in the pasture down by the brook. Animals are often very good company, and Bobby did not feel nearly as lonely as he would had there been no living thing about the house.

Besides he had some work to do in the garden, pulling up the weeds that grew thick in the carrot-bed, and when the last faint sounds of the wheels had died away he went into the garden and began his task.

The little dog went too, for dogs love to be with people and to watch what is going on; and he sat down near Bobby and cocked up his ears and wagged his tail and seemed to take a great interest in the weeding. Once in a while he would rush away to chase a butterfly or bark at a beetle that crawled through the garden, but he always came back to the boy and kept near his side.

By and by the cat, which found it lonely in the big, empty kitchen, now that Bobby's mother was gone, came walking into the garden also, and lay down upon a path in the sunshine and lazily watched the boy at his work. The dog and the cat were good friends, having lived together so long that they did not care to fight each other. To be sure Towser, as the little dog was called, sometimes tried to tease pussy, being himself very mischievous; but when the cat put out her sharp claws and showed her teeth, Towser, like a wise little dog, quickly ran away, and so they managed to get along in a friendly manner.

By the time the carrot-bed was all weeded, the sun was sinking behind the edge of the forest and the new moon rising in the east, and now Bobby began to feel hungry and went into the house for his dish of bread and milk.

"I think I 'll take my supper down to the brook," he said to himself, "and sit upon the grassy bank while I eat it. And I 'll take my fiddle, too, and play upon it to pass the time until father and mother come home."

It was a good idea, for down by the brook it was cool and pleasant; so Bobby took his fiddle under his arm and carried his dish of bread and milk down to the bank that sloped to the edge of the brook. It was rather a steep bank, but Bobby sat upon the edge, and placing his fiddle beside him, leaned against a tree and began to eat his supper.

The little dog had followed at his heels, and the cat also came slowly walking after him, and as Bobby ate, they sat one on either side of him and looked earnestly into his face as if they too were hungry. So he threw some of the bread to Towser, who grabbed it eagerly and swallowed it in the twinkling of an eye. And Bobby left some of the milk in the dish for the cat, also, and she came lazily up and drank it in a dainty, sober fashion, and licked both the dish and spoon until no drop of the milk was left.

Then Bobby picked up his fiddle and tuned it and began to play some of the pretty tunes he knew. And while he played he watched the moon rise higher and higher until it was reflected in the smooth, still water of the brook. Indeed, Bobby could not tell which was the plainest to see, the moon in the sky or the moon in the water. The little dog lay quietly on one side of him, and the cat softly purred upon the other, and even the moolie-cow was attracted by the music and wandered near until she was browsing the grass at the edge of the brook.

After a time, when Bobby had played all the tunes he knew, he laid the fiddle down beside him, near to where the cat slept, and then he lay down upon the bank and began to think.

It is very hard to think long upon a dreamy summer night without falling asleep, and very soon Bobby's eyes closed and he forgot all about the dog and the cat and the cow and the fiddle, and dreamed he was Jack the Giant Killer and was just about to slay the biggest giant in the world.

And while he dreamed, the cat sat up and yawned and stretched herself; and then began wagging her long tail from side to side and watching the moon that was reflected in the water.

But the fiddle lay just behind her, and as she moved her tail, she drew it between the strings of the fiddle, where it caught fast. Then she gave her tail a jerk and pulled the fiddle against the tree, which made a loud noise. This frightened the cat greatly, and not knowing what was the matter with her tail, she started to run as fast as she could. But still the fiddle clung to her tail, and at every step it bounded along and made such a noise that she screamed with terror. And in her fright she ran straight towards the cow, which, seeing a black streak coming at her, and hearing the racket made by the fiddle, became also frightened and made such a jump to get out of the way that she jumped right across the brook, leaping over the very spot where the moon shone in the water!

Bobby had been awakened by the noise, and opened his eyes in time to see the cow jump; and at first it seemed to him that she had actually jumped over the moon in the sky, instead of the one in the brook.

The dog was delighted at the sudden excitement caused by the cat, and ran barking and dancing along the bank, so that he presently knocked against the dish, and behold! it slid down the bank, carrying the spoon with it, and fell with a splash into the water of the brook.

As soon as Bobby recovered from his surprise he ran after the cat, which had raced to the house, and soon came to where the fiddle lay upon the ground, it having at last dropped from the cat's tail. He examined it carefully, and was glad to find it was not hurt, in spite of its rough usage. And then he had to go across the brook and drive the cow back over the little bridge, and also to roll up his sleeve and reach into the water to recover the dish and the spoon.

Then he went back to the house and lighted a lamp, and sat down to compose a new tune before his father and mother returned.

The cat had recovered from her fright and lay quietly under the stove, and Towser sat upon the floor panting, with his mouth wide open, and looking so comical that Bobby thought he was actually laughing at the whole occurrence.

And these were the words to the tune that Bobby composed that night:

Featured in our selection of Children's Poems.

Return to the L. Frank Baum Home Page, or . . . Read the next short story; The Cowardly Lion and the Hungry Tiger