What Jack Horner Did 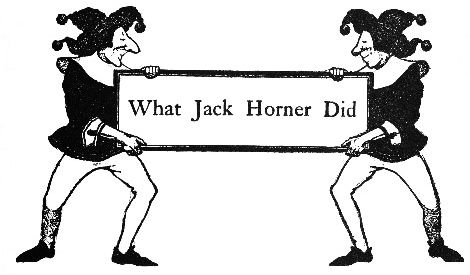 Little Jack Horner sat in a corner,
Eating a Christmas pie;
He put in his thumb and pulled out a plum
And said, "What a good boy am I!"

Little Jack Horner lived in an old, tumble-down house at the edge of a big wood; and there many generations of Horners had lived before him, and had earned their living by chopping wood. Jack's father and mother were both dead, and he lived with his grandfather and grandmother, who took great pains to teach him all that a boy should know.

They lived very comfortably and happily together until one day a great tree fell upon Grandpa Horner and crushed his legs; and from that time on he could not work at all, but had to be nursed and tended very carefully.

This calamity was a great affliction to the Horners. Grandma Horner had a little money saved up in an old broken teapot that she kept in the cupboard, but that would not last them a great time, and when it was gone they would have nothing with which to buy food.

"I 'm sure I do n't know what is to become of us," she said to Jack, "for I am too old to work, and you are too young." She always told her troubles to Jack now; small though he was, he was the only one she could talk freely with, since it would only bother the poor crippled grandfather to tell him how low the money was getting in the teapot.

"It is true," replied Jack, "that you are too old to work, for your rheumatism will barely allow you to care for the house and cook our meals; and there is grandpa to be tended. But I am not too young to work, grandma, and I shall take my little hatchet and go into the wood. I cannot cut the big trees, but I can the smaller ones, and I am sure I shall be able to pile up enough wood to secure the money we need for food."

"You are a good boy, dear," said grandma Horner, patting his head lovingly, "but you are too young for the task. We must think of some other way to keep the wolf from the door."

But Jack was not shaken in his resolve, although he saw it was useless to argue further with his grandmother. So the next morning he rose very early and took his little axe and went into the wood to begin his work. There were a good many branches scattered about, and these he was able to cut with ease; and then he piled them up nicely to be sold when the wood-carter next came around. When dinner-time came he stopped long enough to eat some of the bread and cheese he had brought with him, and then he resumed his work.

But scarcely had he chopped one branch when a faint cry from the wood arrested his attention. It seemed as if some one was shouting for help. Jack listened a moment, and again heard the cry.

Without hesitation he seized his axe and ran toward the place from whence the cry had proceeded. The underbrush was very thick and the thorns caught in his clothing and held him back, but with the aid of his sharp little axe he overcame all difficulties and presently reached a place where the wood was more open.

He paused here, for often he had been told by Grandpa Horner that there were treacherous bogs in this part of the wood, which were so covered with mosses and ferns that the ground seemed solid enough to walk upon. But woe to the unlucky traveler who stepped unawares upon their surface; for instantly he found himself caught by the clinging moist clay, to sink farther and farther into the bog until, swallowed up in the mire, he would meet a horrible death beneath its slimy surface. His grandfather had told him never to go near these terrible bogs, and Jack, who was an obedient boy, had always kept away from this part of the wood. But as he paused, again that despairing cry came to his ears, very near to him now, it seemed:

Forgetful of all save a desire to assist this unknown sufferer, Jack sprang forward with an answering cry, and only halted when he found himself upon the edge of a vast bog.

"Where are you?" he then shouted.

"Here!" answered a voice, and, looking down, Jack saw, a few feet away, the head and shoulders of a man. He had walked into the bog and sunk into its treacherous depths nearly to his waist, and, although he struggled bravely, his efforts only seemed to draw him farther down toward a frightful death.

For a moment, filled with horror and dismay, Jack stood looking at the man. Then he remembered a story he had once heard of how a man had been saved from the bog.

"Be quiet, sir!" he called to the unfortunate stranger; "save all your strength, and I may yet be able to rescue you."

He then ran to a tall sapling that stood near and began chopping away with his axe. The keen blade speedily cut through the young but tough wood, and, then Jack dragged it to the edge of the bog, and, exerting all his strength, pushed it out until the sapling was within reach of the sinking man.

"Grab it, sir!" he called out, "and hold on tightly. It will keep you from sinking farther into the mire, and when you have gained more strength you may be able to pull yourself out."

"You are a brave boy," replied the stranger, "and I shall do as you tell me."

It was a long and tedious struggle, and often Jack thought the stranger would despair and be unable to drag his body from the firm clutch of the bog; but little by little the man succeeded in drawing himself up by the sapling, and at last he was saved, and sank down exhausted upon the firm ground by Jack's side.

The boy then ran for some water that stood in a slough near by, and with this he bathed the stranger's face and cooled his parched lips. Then he gave him the remains of his bread and cheese, and soon the gentleman became strong enough to walk with Jack's help to the cottage at the edge of the wood.

Grandma Horner was greatly surprised to see the strange man approaching, supported by her sturdy little grandson; but she ran to help him, and afterward gave him some old clothing of Grandpa Horner's, to replace his own muddy garments. When the man had fully rested, she brewed him her last bit of tea, and by that time the stranger declared he felt as good as new.

"Is this your son, ma'am?" he asked, pointing to Jack.

"He is my grandson, sir," answered the woman.

"He is a good boy," declared the stranger, "and a brave boy as well, for he has saved my life. I live far away in a big city, and have plenty of money. If you will give Jack to me I will take him home and educate him, and make a great man of him when he grows up."

Grandma Horner hesitated, for the boy was very dear to her and the pride of her old age; but Jack spoke up for himself.

"I 'll not go," he said, stoutly; "you are very kind, and mean well by me, but grandma and grandpa have only me to care for them now, and I must stay with them and cut the wood, and so keep them supplied with food."

The stranger said nothing more, but he patted Jack's head kindly, and soon after left them and took the road to the city.

The next morning Jack went to the wood again, and began chopping as bravely as before. And by hard work he cut a great deal of wood, which the wood-carter carried away and sold for him. The pay was not very much, to be sure, but Jack was glad that he was able to earn something to help his grandparents.

And so the days passed rapidly away until it was nearly Christmas time, and now, in spite of Jack's earnings, the money was very low indeed in the broken teapot.

One day, just before Christmas, a great wagon drove up to the door of the little cottage, and in it was the stranger Jack had rescued from the bog. The wagon was loaded with a store of good things which would add to the comfort of the aged pair and their grandson, including medicines for grandpa and rare teas for grandma, and a fine suit of clothes for Jack, who was just then away at work in the wood.

When the stranger had brought all these things into the house, he asked to see the old teapot. Trembling with the excitement of their good fortune, Grandma Horner brought out the teapot, and the gentleman drew a bag from beneath his coat and filled the pot to the brim with shining gold pieces.

"If ever you need more," he said, "send to me, and you shall have all you wish to make you comfortable."

Then he told her his name, and where he lived, so that she might find him if need be, and then he drove away in the empty wagon before Grandma Horner had half finished thanking him.

You can imagine how astonished and happy little Jack was when he returned from his work and found all the good things his kind benefactor had brought. Grandma Horner was herself so delighted that she caught the boy in her arms, and hugged and kissed him, declaring that his brave rescue of the gentleman had brought them all this happiness in their hour of need.

"To-morrow is Christmas," she said, "and we shall have an abundance with which to celebrate the good day. So I shall make you a Christmas pie, Jack dear, and stuff it full of plums, for you must have your share of our unexpected prosperity."

And Grandma Horner was as good as her word, and made a very delicious pie indeed for her darling grandson.

And that is was how it came that

"Little Jack Horner sat in a corner
Eating a Christmas pie;
He put in his thumb and pulled out a plum
And said, "What a good boy am I!

Add What Jack Horner Did to your library.