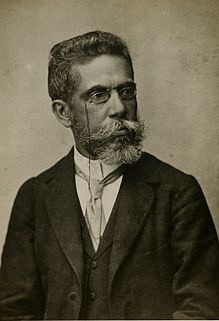 Joaquim Maria Machado de Assis (1839-1908), better known as Machado de Assis, was a Brazilian short story writer, poet, and novelist considered the most influential writer of Brazilian literary schools of the late 19th and early 20th centuries, exemplary of Realism. The theme of many of his stories centers around jealousy and its intrigue. Though he did not gain popularity outside Brazil during his lifetime, the most prestigious literary award in Brazil was named in his honor, influencing authors such as Carlos Fuentes, Susan Sontag and Thomas McGuane.

Assis was born in Rio de Janeiro to a father who was a wall painter and son of a slave, and a mother who was an Azorean Portuguese washerwoman. He attended public school, but was not a very good student, and learned Latin from Father Silveira Sarmento. Assis's first job was as a proofreader for the newspaper Correio Mercantil, after which he worked for several other papers with mentor editors who encouraged him to write. He started publishing his poetry, leading an extremely modest existence. He became a bureaucrat at the department of agriculture and published two poetry collections, which met a very weak reception. He turned to writing novels, praised for their skeptical and realistic tone. Memoirs of Brás Cubas (known by its translated title as Epitaph of a Small Winner) was published posthumously and is widely considered a masterpiece.

Assis was multilingual, self-taught in four more languages beyond Portuguese and Latin: English, German, French, and Greek. His greatest influences from English literature included Lord Byron, Jonathan Swift, and most significantly, William Shakespeare, whose works he translated and referenced in many of his own works. French realists who influenced his work included Honoré de Balzac, Gustave Flaubert and Émile Zola. Assis was a strong supporter of theater and wrote many plays, as well as several intriguing short stories, that artfully blend many cultural and linguistic elements, adding to his work's appeal.

Life
The Attendant's Confession
The Fortune-Teller