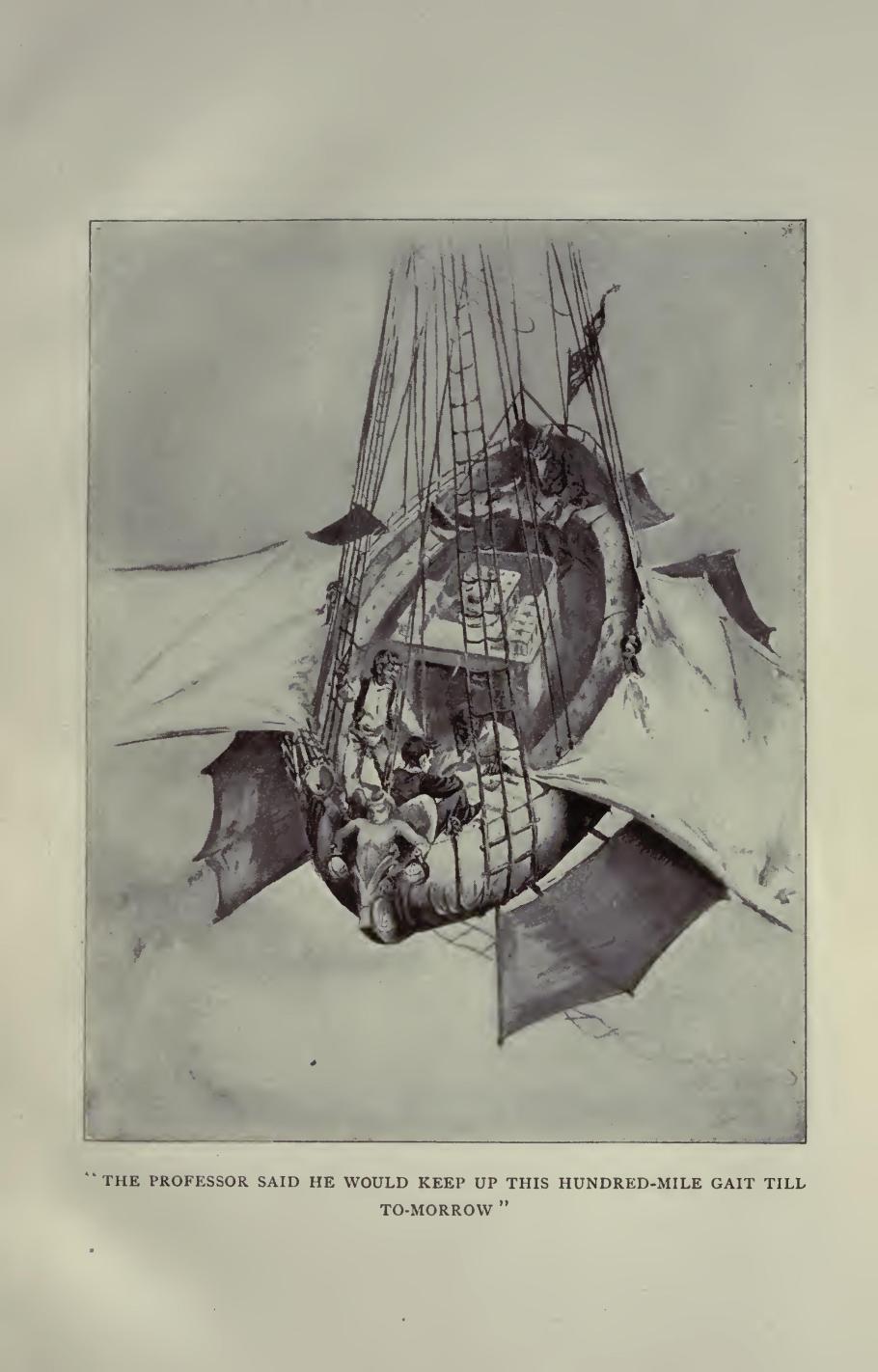 AND it got lonesomer and lonesomer. There was the big sky up there, emptyand awful deep; and the ocean down there without a thing on it but justthe waves. All around us was a ring, where the sky and the water cometogether; yes, a monstrous big ring it was, and we right in the deadcenter of it--plumb in the center. We was racing along like a prairiefire, but it never made any difference, we couldn't seem to git past thatcenter no way. I couldn't see that we ever gained an inch on that ring.It made a body feel creepy, it was so curious and unaccountable.

Well, everything was so awful still that we got to talking in a very lowvoice, and kept on getting creepier and lonesomer and less and lesstalky, till at last the talk ran dry altogether, and we just set thereand "thunk," as Jim calls it, and never said a word the longest time.

The professor never stirred till the sun was overhead, then he stood upand put a kind of triangle to his eye, and Tom said it was a sextant andhe was taking the sun to see whereabouts the balloon was. Then heciphered a little and looked in a book, and then he begun to carry onagain. He said lots of wild things, and, among others, he said he wouldkeep up this hundred-mile gait till the middle of to-morrow afternoon,and then he'd land in London.

We said we would be humbly thankful.

He was turning away, but he whirled around when we said that, and give usa long look of his blackest kind--one of the maliciousest andsuspiciousest looks I ever see. Then he says:

We didn't know what to say, so we held in and didn't say nothing at all.

He went aft and set down, but he couldn't seem to git that thing out ofhis mind. Every now and then he would rip out something about it, and tryto make us answer him, but we dasn't.

It got lonesomer and lonesomer right along, and it did seem to me Icouldn't stand it. It was still worse when night begun to come on. By andby Tom pinched me and whispers:

I took a glance aft, and see the professor taking a whet out of a bottle.I didn't like the looks of that. By and by he took another drink, andpretty soon he begun to sing. It was dark now, and getting black andstormy. He went on singing, wilder and wilder, and the thunder begun tomutter, and the wind to wheeze and moan among the ropes, and altogetherit was awful. It got so black we couldn't see him any more, and wished wecouldn't hear him, but we could. Then he got still; but he warn't stillten minutes till we got suspicious, and wished he would start up hisnoise again, so we could tell where he was. By and by there was a flashof lightning, and we see him start to get up, but he staggered and felldown. We heard him scream out in the dark:

"They don't want to go to England. All right, I'll change the course.They want to leave me. I know they do. Well, they shall--and NOW!"

I 'most died when he said that. Then he was still again--still so long Icouldn't bear it, and it did seem to me the lightning wouldn't EVER comeagain. But at last there was a blessed flash, and there he was, on hishands and knees crawling, and not four feet from us. My, but his eyes wasterrible! He made a lunge for Tom, and says, "Overboard YOU go!" but itwas already pitch-dark again, and I couldn't see whether he got him ornot, and Tom didn't make a sound.

There was another long, horrible wait; then there was a flash, and I seeTom's head sink down outside the boat and disappear. He was on therope-ladder that dangled down in the air from the gunnel. The professorlet off a shout and jumped for him, and straight off it was pitch-darkagain, and Jim groaned out, "Po' Mars Tom, he's a goner!" and made a jumpfor the professor, but the professor warn't there.

Then we heard a couple of terrible screams, and then another not so loud,and then another that was 'way below, and you could only JUST hear it;and I heard Jim say, "Po' Mars Tom!"

Then it was awful still, and I reckon a person could 'a' counted fourthousand before the next flash come. When it come I see Jim on his knees,with his arms on the locker and his face buried in them, and he wascrying. Before I could look over the edge it was all dark again, and Iwas glad, because I didn't want to see. But when the next flash come, Iwas watching, and down there I see somebody a-swinging in the wind on theladder, and it was Tom!

His voice was so weak, and the wind roared so, I couldn't make out whathe said, but I thought he asked was the professor up there. I shouts:

Of course, all this in the dark.

"Oh, Huck, how kin you act so, when you know po' Mars Tom--" Then he letoff an awful scream, and flung his head and his arms back and let offanother one, because there was a white glare just then, and he had raisedup his face just in time to see Tom's, as white as snow, rise above thegunnel and look him right in the eye. He thought it was Tom's ghost, yousee.

Tom clumb aboard, and when Jim found it WAS him, and not his ghost, hehugged him, and called him all sorts of loving names, and carried on likehe was gone crazy, he was so glad. Says I:

"What did you wait for, Tom? Why didn't you come up at first?"

That was the way with Tom Sawyer--always sound. He warn't coming up tillhe knowed where the professor was.

The storm let go about this time with all its might; and it was dreadfulthe way the thunder boomed and tore, and the lightning glared out, andthe wind sung and screamed in the rigging, and the rain come down. Onesecond you couldn't see your hand before you, and the next you couldcount the threads in your coat-sleeve, and see a whole wide desert ofwaves pitching and tossing through a kind of veil of rain. A storm likethat is the loveliest thing there is, but it ain't at its best when youare up in the sky and lost, and it's wet and lonesome, and there's justbeen a death in the family.

We set there huddled up in the bow, and talked low about the poorprofessor; and everybody was sorry for him, and sorry the world had madefun of him and treated him so harsh, when he was doing the best he could,and hadn't a friend nor nobody to encourage him and keep him frombrooding his mind away and going deranged. There was plenty of clothesand blankets and everything at the other end, but we thought we'd ruthertake the rain than go meddling back there.