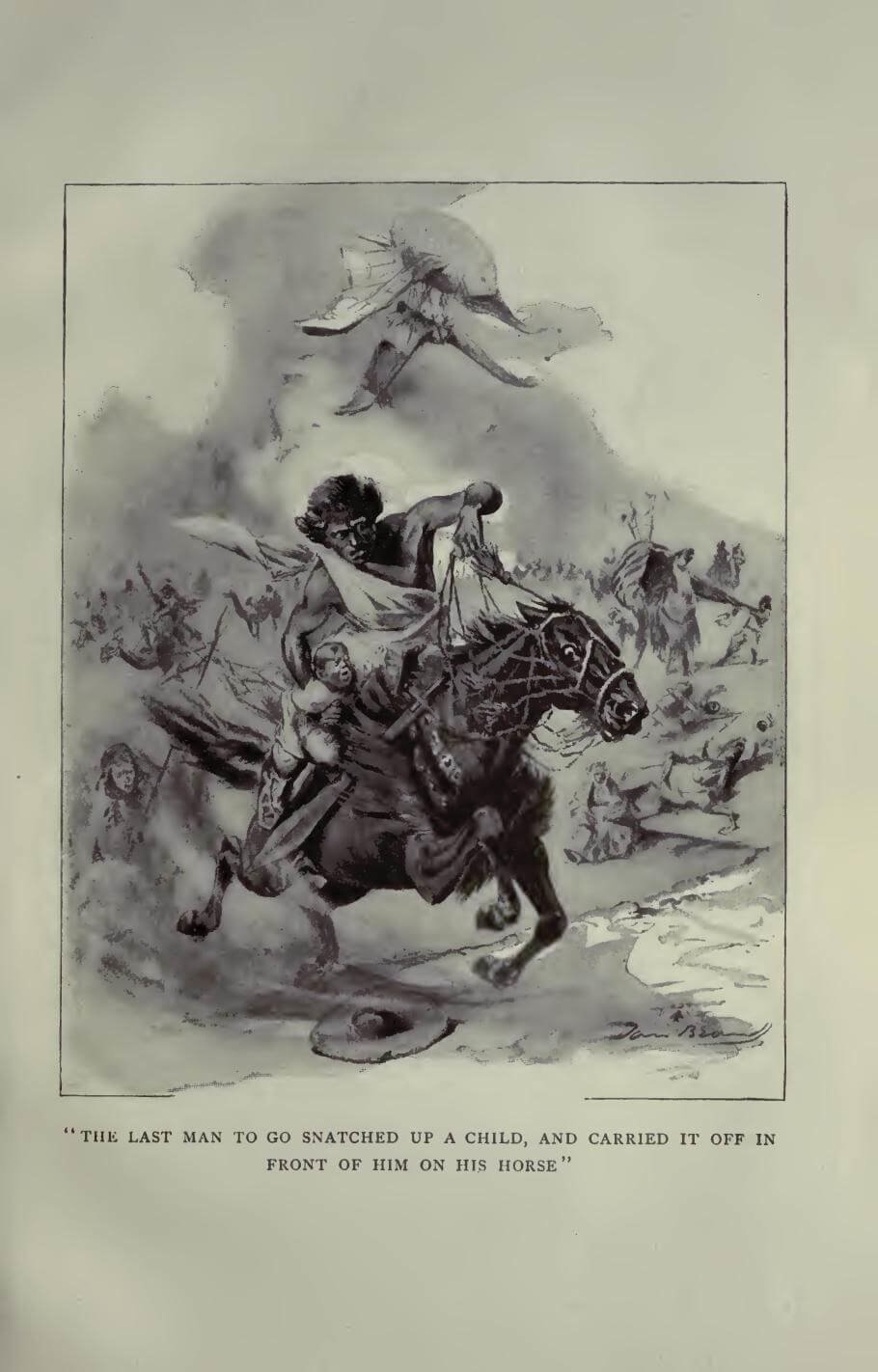 I WAS so weak that the only thing I wanted was a chance to lay down, so Imade straight for my locker-bunk, and stretched myself out there. But abody couldn't get back his strength in no such oven as that, so Tom givethe command to soar, and Jim started her aloft.

We had to go up a mile before we struck comfortable weather where it wasbreezy and pleasant and just right, and pretty soon I was all straightagain. Tom had been setting quiet and thinking; but now he jumps up andsays:

"I bet you a thousand to one I know where we are. We're in the GreatSahara, as sure as guns!"

He was so excited he couldn't hold still; but I wasn't. I says:

"Well, then, where's the Great Sahara? In England or in Scotland?"

Jim's eyes bugged out, and he begun to stare down with no end ofinterest, because that was where his originals come from; but I didn'tmore than half believe it. I couldn't, you know; it seemed too awful faraway for us to have traveled.

But Tom was full of his discovery, as he called it, and said the lionsand the sand meant the Great Desert, sure. He said he could 'a' foundout, before we sighted land, that we was crowding the land somewheres, ifhe had thought of one thing; and when we asked him what, he said:

"These clocks. They're chronometers. You always read about them in seavoyages. One of them is keeping Grinnage time, and the other is keepingSt. Louis time, like my watch. When we left St. Louis it was four in theafternoon by my watch and this clock, and it was ten at night by thisGrinnage clock. Well, at this time of the year the sun sets at aboutseven o'clock. Now I noticed the time yesterday evening when the sun wentdown, and it was half-past five o'clock by the Grinnage clock, and halfpast 11 A.M. by my watch and the other clock. You see, the sun rose andset by my watch in St. Louis, and the Grinnage clock was six hours fast;but we've come so far east that it comes within less than half an hour ofsetting by the Grinnage clock now, and I'm away out--more than fourhours and a half out. You see, that meant that we was closing up on thelongitude of Ireland, and would strike it before long if we was p'intedright--which we wasn't. No, sir, we've been a-wandering--wandering 'waydown south of east, and it's my opinion we are in Africa. Look at thismap. You see how the shoulder of Africa sticks out to the west. Think howfast we've traveled; if we had gone straight east we would be long pastEngland by this time. You watch for noon, all of you, and we'll stand up,and when we can't cast a shadow we'll find that this Grinnage clock iscoming mighty close to marking twelve. Yes, sir, I think we're in Africa;and it's just bully."

Jim was gazing down with the glass. He shook his head and says:

"That's nothing; they don't live in the desert. What is that, 'way offyonder? Gimme a glass."

He took a long look, and said it was like a black string stretched acrossthe sand, but he couldn't guess what it was.

"Well," I says, "I reckon maybe you've got a chance now to find outwhereabouts this balloon is, because as like as not that is one of theselines here, that's on the map, that you call meridians of longitude, andwe can drop down and look at its number, and--"

"Oh, shucks, Huck Finn, I never see such a lunkhead as you. Did yous'pose there's meridians of longitude on the EARTH?"

"Tom Sawyer, they're set down on the map, and you know it perfectly well,and here they are, and you can see for yourself."

"Of course they're on the map, but that's nothing; there ain't any on theGROUND."

"Well, then, that map's a liar again. I never see such a liar as thatmap."

He fired up at that, and I was ready for him, and Jim was warming hisopinion, too, and next minute we'd 'a' broke loose on another argument,if Tom hadn't dropped the glass and begun to clap his hands like a maniacand sing out:

So I grabbed a glass and Jim, too, and took a look, but I wasdisappointed, and says:

"Camels your granny; they're spiders."

"Spiders in a desert, you shad? Spiders walking in a procession? Youdon't ever reflect, Huck Finn, and I reckon you really haven't gotanything to reflect WITH. Don't you know we're as much as a mile up inthe air, and that that string of crawlers is two or three miles away?Spiders, good land! Spiders as big as a cow? Perhaps you'd like to godown and milk one of 'em. But they're camels, just the same. It's acaravan, that's what it is, and it's a mile long."

"Well, then, let's go down and look at it. I don't believe in it, andain't going to till I see it and know it."

"All right," he says, and give the command:

As we come slanting down into the hot weather, we could see that it wascamels, sure enough, plodding along, an everlasting string of them, withbales strapped to them, and several hundred men in long white robes, anda thing like a shawl bound over their heads and hanging down with tasselsand fringes; and some of the men had long guns and some hadn't, and somewas riding and some was walking. And the weather--well, it was justroasting. And how slow they did creep along! We swooped down now, all ofa sudden, and stopped about a hundred yards over their heads.

The men all set up a yell, and some of them fell flat on their stomachs,some begun to fire their guns at us, and the rest broke and scamperedevery which way, and so did the camels.

We see that we was making trouble, so we went up again about a mile, tothe cool weather, and watched them from there. It took them an hour toget together and form the procession again; then they started along, butwe could see by the glasses that they wasn't paying much attention toanything but us. We poked along, looking down at them with the glasses,and by and by we see a big sand mound, and something like people theother side of it, and there was something like a man laying on top of themound that raised his head up every now and then, and seemed to bewatching the caravan or us, we didn't know which. As the caravan gotnearer, he sneaked down on the other side and rushed to the other men andhorses--for that is what they was--and we see them mount in a hurry; andnext, here they come, like a house afire, some with lances and some withlong guns, and all of them yelling the best they could.

They come a-tearing down on to the caravan, and the next minute bothsides crashed together and was all mixed up, and there was such anotherpopping of guns as you never heard, and the air got so full of smoke youcould only catch glimpses of them struggling together. There must 'a'been six hundred men in that battle, and it was terrible to see. Thenthey broke up into gangs and groups, fighting tooth and nail, andscurrying and scampering around, and laying into each other likeeverything; and whenever the smoke cleared a little you could see deadand wounded people and camels scattered far and wide and all about, andcamels racing off in every direction.

At last the robbers see they couldn't win, so their chief sounded asignal, and all that was left of them broke away and went scamperingacross the plain. The last man to go snatched up a child and carried itoff in front of him on his horse, and a woman run screaming and beggingafter him, and followed him away off across the plain till she wasseparated a long ways from her people; but it warn't no use, and she hadto give it up, and we see her sink down on the sand and cover her facewith her hands. Then Tom took the hellum, and started for that yahoo, andwe come a-whizzing down and made a swoop, and knocked him out of thesaddle, child and all; and he was jarred considerable, but the childwasn't hurt, but laid there working its hands and legs in the air like atumble-bug that's on its back and can't turn over. The man wentstaggering off to overtake his horse, and didn't know what had hit him,for we was three or four hundred yards up in the air by this time.

We judged the woman would go and get the child now; but she didn't. Wecould see her, through the glass, still setting there, with her headbowed down on her knees; so of course she hadn't seen the performance,and thought her child was clean gone with the man. She was nearly a halfa mile from her people, so we thought we might go down to the child,which was about a quarter of a mile beyond her, and snake it to herbefore the caravan people could git to us to do us any harm; and besides,we reckoned they had enough business on their hands for one while,anyway, with the wounded. We thought we'd chance it, and we did. Weswooped down and stopped, and Jim shinned down the ladder and fetched upthe kid, which was a nice fat little thing, and in a noble good humor,too, considering it was just out of a battle and been tumbled off of ahorse; and then we started for the mother, and stopped back of her andtolerable near by, and Jim slipped down and crept up easy, and when hewas close back of her the child goo-goo'd, the way a child does, and sheheard it, and whirled and fetched a shriek of joy, and made a jump forthe kid and snatched it and hugged it, and dropped it and hugged Jim, andthen snatched off a gold chain and hung it around Jim's neck, and huggedhim again, and jerked up the child again, a-sobbing and glorifying allthe time; and Jim he shoved for the ladder and up it, and in a minute wewas back up in the sky and the woman was staring up, with the back of herhead between her shoulders and the child with its arms locked around herneck. And there she stood, as long as we was in sight a-sailing away inthe sky.