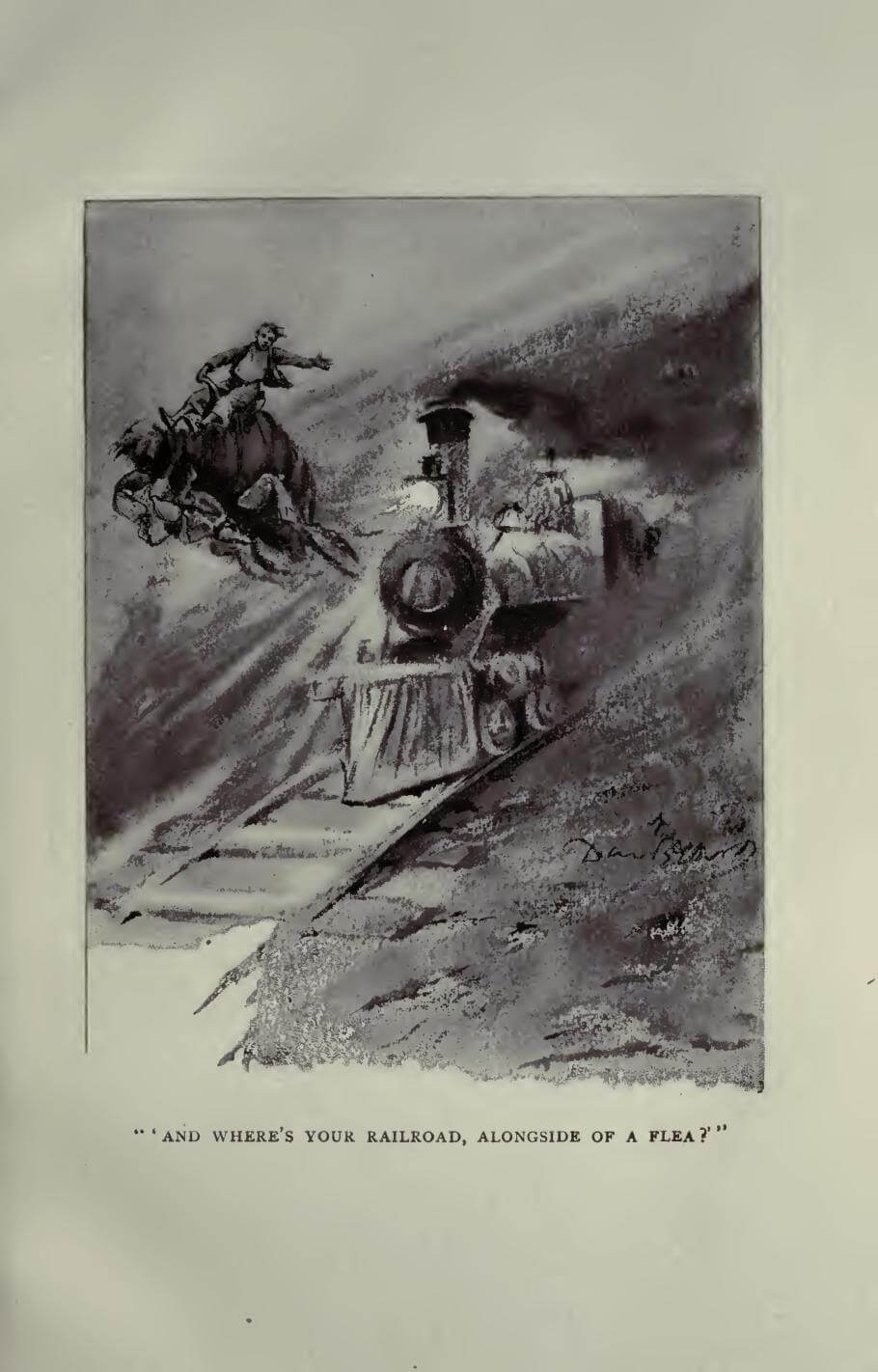 "NOON!" says Tom, and so it was. His shadder was just a blot around hisfeet. We looked, and the Grinnage clock was so close to twelve thedifference didn't amount to nothing. So Tom said London was right northof us or right south of us, one or t'other, and he reckoned by theweather and the sand and the camels it was north; and a good many milesnorth, too; as many as from New York to the city of Mexico, he guessed.

Jim said he reckoned a balloon was a good deal the fastest thing in theworld, unless it might be some kinds of birds--a wild pigeon, maybe, or arailroad.

But Tom said he had read about railroads in England going nearly ahundred miles an hour for a little ways, and there never was a bird inthe world that could do that--except one, and that was a flea.

"A flea? Why, Mars Tom, in de fust place he ain't a bird, stricklyspeakin'--"

"As many as a railroad?"

"Yassir, if you give him time."

"Now you begin to see, don't you, that DISTANCE ain't the thing to judgeby, at all; it's the time it takes to go the distance IN that COUNTS,ain't it?"

"It's a matter of PROPORTION, that's what it is; and when you come togauge a thing's speed by its size, where's your bird and your man andyour railroad, alongside of a flea? The fastest man can't run more thanabout ten miles in an hour--not much over ten thousand times his ownlength. But all the books says any common ordinary third-class flea canjump a hundred and fifty times his own length; yes, and he can make fivejumps a second too--seven hundred and fifty times his own length, in onelittle second--for he don't fool away any time stopping and starting--hedoes them both at the same time; you'll see, if you try to put yourfinger on him. Now that's a common, ordinary, third-class flea's gait;but you take an Eyetalian FIRST-class, that's been the pet of thenobility all his life, and hasn't ever knowed what want or sickness orexposure was, and he can jump more than three hundred times his ownlength, and keep it up all day, five such jumps every second, which isfifteen hundred times his own length. Well, suppose a man could gofifteen hundred times his own length in a second--say, a mile and a half.It's ninety miles a minute; it's considerable more than five thousandmiles an hour. Where's your man NOW?--yes, and your bird, and yourrailroad, and your balloon? Laws, they don't amount to shucks 'longsideof a flea. A flea is just a comet b'iled down small."

Jim was a good deal astonished, and so was I. Jim said:

"Yes, they are; they're perfectly true."

"Well, I bet they do. They've got ever so much more sense, and brains,and brightness, in proportion to their size, than any other cretur in theworld. A person can learn them 'most anything; and they learn it quickerthan any other cretur, too. They've been learnt to haul little carriagesin harness, and go this way and that way and t'other way according totheir orders; yes, and to march and drill like soldiers, doing it asexact, according to orders, as soldiers does it. They've been learnt todo all sorts of hard and troublesome things. S'pose you could cultivate aflea up to the size of a man, and keep his natural smartness a-growingand a-growing right along up, bigger and bigger, and keener and keener,in the same proportion--where'd the human race be, do you reckon? Thatflea would be President of the United States, and you couldn't any moreprevent it than you can prevent lightning."

"There's more to him, by a long sight, than there is to any other cretur,man or beast, in proportion to size. He's the interestingest of them all.People have so much to say about an ant's strength, and an elephant's,and a locomotive's. Shucks, they don't begin with a flea. He can lift twoor three hundred times his own weight. And none of them can come anywherenear it. And, moreover, he has got notions of his own, and is veryparticular, and you can't fool him; his instinct, or his judgment, orwhatever it is, is perfectly sound and clear, and don't ever make amistake. People think all humans are alike to a flea. It ain't so.There's folks that he won't go near, hungry or not hungry, and I'm one ofthem. I've never had one of them on me in my life."

"Well, sah, I hain't ever heard de likes o' dat befo'." Jim couldn'tbelieve it, and I couldn't; so we had to drop down to the sand and git asupply and see. Tom was right. They went for me and Jim by the thousand,but not a one of them lit on Tom. There warn't no explaining it, butthere it was and there warn't no getting around it. He said it had alwaysbeen just so, and he'd just as soon be where there was a million of themas not; they'd never touch him nor bother him.

We went up to the cold weather to freeze 'em out, and stayed a littlespell, and then come back to the comfortable weather and went lazyingalong twenty or twenty-five miles an hour, the way we'd been doing forthe last few hours. The reason was, that the longer we was in thatsolemn, peaceful desert, the more the hurry and fuss got kind of sootheddown in us, and the more happier and contented and satisfied we got tofeeling, and the more we got to liking the desert, and then loving it. Sowe had cramped the speed down, as I was saying, and was having a mostnoble good lazy time, sometimes watching through the glasses, sometimesstretched out on the lockers reading, sometimes taking a nap.

It didn't seem like we was the same lot that was in such a state to findland and git ashore, but it was. But we had got over that--clean over it.We was used to the balloon now and not afraid any more, and didn't wantto be anywheres else. Why, it seemed just like home; it 'most seemed asif I had been born and raised in it, and Jim and Tom said the same. Andalways I had had hateful people around me, a-nagging at me, and pesteringof me, and scolding, and finding fault, and fussing and bothering, andsticking to me, and keeping after me, and making me do this, and makingme do that and t'other, and always selecting out the things I didn't wantto do, and then giving me Sam Hill because I shirked and done somethingelse, and just aggravating the life out of a body all the time; but uphere in the sky it was so still and sunshiny and lovely, and plenty toeat, and plenty of sleep, and strange things to see, and no nagging andno pestering, and no good people, and just holiday all the time. Land, Iwarn't in no hurry to git out and buck at civilization again. Now, one ofthe worst things about civilization is, that anybody that gits a letterwith trouble in it comes and tells you all about it and makes you feelbad, and the newspapers fetches you the troubles of everybody all overthe world, and keeps you downhearted and dismal 'most all the time, andit's such a heavy load for a person. I hate them newspapers; and I hateletters; and if I had my way I wouldn't allow nobody to load his troubleson to other folks he ain't acquainted with, on t'other side of the world,that way. Well, up in a balloon there ain't any of that, and it's thedarlingest place there is.

We had supper, and that night was one of the prettiest nights I ever see.The moon made it just like daylight, only a heap softer; and once we seea lion standing all alone by himself, just all alone on the earth, itseemed like, and his shadder laid on the sand by him like a puddle ofink. That's the kind of moonlight to have.

Mainly we laid on our backs and talked; we didn't want to go to sleep.Tom said we was right in the midst of the Arabian Nights now. He said itwas right along here that one of the cutest things in that book happened;so we looked down and watched while he told about it, because there ain'tanything that is so interesting to look at as a place that a book hastalked about. It was a tale about a camel-driver that had lost his camel,and he come along in the desert and met a man, and says:

"Have you run across a stray camel to-day?"

And the man says:

"Was he blind in his left eye?"

"Had he lost an upper front tooth?"

"Was his off hind leg lame?"

"Was he loaded with millet-seed on one side and honey on the other?"

"Yes, but you needn't go into no more details--that's the one, and I'min a hurry. Where did you see him?"

"Hain't seen him at all? How can you describe him so close, then?"

"Because when a person knows how to use his eyes, everything has got ameaning to it; but most people's eyes ain't any good to them. I knowed acamel had been along, because I seen his track. I knowed he was lame inhis off hind leg because he had favored that foot and trod light on it,and his track showed it. I knowed he was blind on his left side becausehe only nibbled the grass on the right side of the trail. I knowed he hadlost an upper front tooth because where he bit into the sod histeeth-print showed it. The millet-seed sifted out on one side--the antstold me that; the honey leaked out on the other--the flies told me that.I know all about your camel, but I hain't seen him."

Jim puzzled a minute, then he says:

"Well! Ef dat ain't de beatenes' tale ever I struck. Jist gits to deplace whah de intrust is gittin' red-hot, en down she breaks. Why, MarsTom, dey ain't no SENSE in a tale dat acts like dat. Hain't you got noIDEA whether de man got de camel back er not?"

I see myself there warn't no sense in the tale, to chop square off thatway before it come to anything, but I warn't going to say so, because Icould see Tom was souring up pretty fast over the way it flatted out andthe way Jim had popped on to the weak place in it, and I don't think it'sfair for everybody to pile on to a feller when he's down. But Tom hewhirls on me and says:

"What do YOU think of the tale?"

Of course, then, I had to come out and make a clean breast and say it didseem to me, too, same as it did to Jim, that as long as the tale stoppedsquare in the middle and never got to no place, it really warn't worththe trouble of telling.

Tom's chin dropped on his breast, and 'stead of being mad, as I reckonedhe'd be, to hear me scoff at his tale that way, he seemed to be only sad;and he says:

"Some people can see, and some can't--just as that man said. Let alone acamel, if a cyclone had gone by, YOU duffers wouldn't 'a' noticed thetrack."

I don't know what he meant by that, and he didn't say; it was just one ofhis irrulevances, I reckon--he was full of them, sometimes, when he wasin a close place and couldn't see no other way out--but I didn't mind.We'd spotted the soft place in that tale sharp enough, he couldn't gitaway from that little fact. It graveled him like the nation, too, Ireckon, much as he tried not to let on.