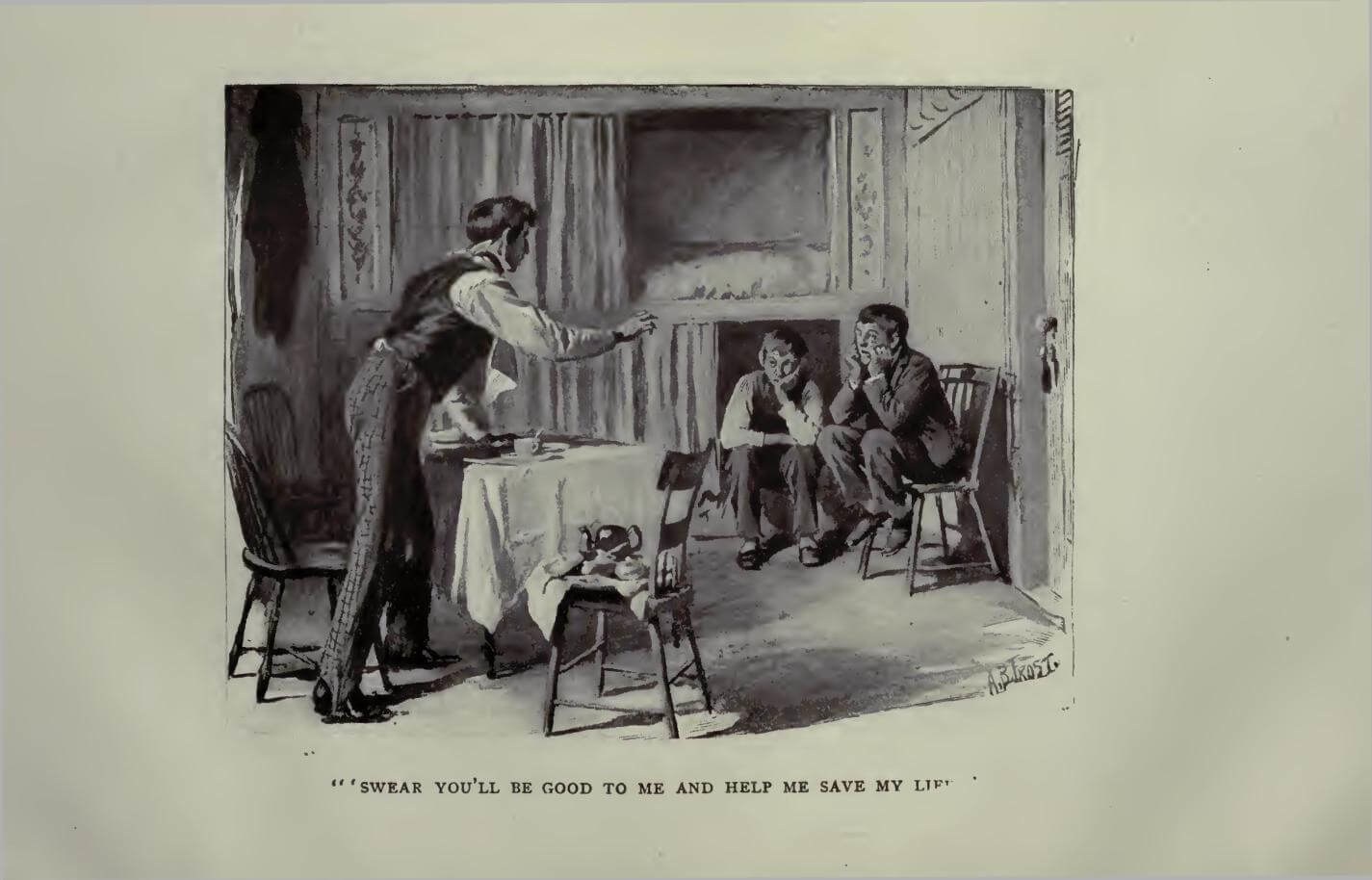 WE had powerful good luck; because we got a chance in a stern-wheeler from away North which was bound for one of them bayous or one-horse rivers away down Louisiana way, and so we could go all the way down the Upper Mississippi and all the way down the Lower Mississippi to that farmin Arkansaw without having to change steamboats at St. Louis; not so very much short of a thousand miles at one pull.

A pretty lonesome boat; there warn't but few passengers, and all old folks, that set around, wide apart, dozing, and was very quiet. We was four days getting out of the "upper river," because we got aground so much. But it warn't dull--couldn't be for boys that was traveling, of course.

From the very start me and Tom allowed that there was somebody sick in the stateroom next to ourn, because the meals was always toted in thereby the waiters. By and by we asked about it--Tom did and the waiter said it was a man, but he didn't look sick.

"What makes you think that?"

"Because if he was sick he would pull his clothes off SOME time or other--don't you reckon he would? Well, this one don't. At least he don'tever pull off his boots, anyway."

"The mischief he don't! Not even when he goes to bed?"

It was always nuts for Tom Sawyer--a mystery was. If you'd lay out a mystery and a pie before me and him, you wouldn't have to say take your choice; it was a thing that would regulate itself. Because in my natureI have always run to pie, whilst in his nature he has always run tomystery. People are made different. And it is the best way. Tom says tothe waiter:

"Where'd he come aboard?"

"I think he got aboard at Elexandria, up on the Iowa line."

"What do you reckon he's a-playing?"

"I hain't any notion--I never thought of it."

I says to myself, here's another one that runs to pie.

"Anything peculiar about him?--the way he acts or talks?"

"No--nothing, except he seems so scary, and keeps his doors locked night and day both, and when you knock he won't let you in till he opens the door a crack and sees who it is."

"By jimminy, it's int'resting! I'd like to get a look at him. Say--thenext time you're going in there, don't you reckon you could spread the door and--"

"No, in deedy! He's always behind it. He would block that game."

Tom studied over it, and then he says:

"Looky here. You lend me your apern and let me take him his breakfast inthe morning. I'll give you a quarter."

The boy was plenty willing enough, if the head steward wouldn't mind.Tom says that's all right, he reckoned he could fix it with the head steward; and he done it. He fixed it so as we could both go in with aperns on and toting vittles.

He didn't sleep much, he was in such a sweat to get in there and find out the mystery about Phillips; and moreover he done a lot of guessing about it all night, which warn't no use, for if you are going to find out the facts of a thing, what's the sense in guessing out what ain't the facts and wasting ammunition? I didn't lose no sleep. I wouldn't give a dern to know what's the matter of Phillips, I says to myself.

Well, in the morning we put on the aperns and got a couple of trays of truck, and Tom he knocked on the door. The man opened it a crack, and then he let us in and shut it quick. By Jackson, when we got a sight of him, we 'most dropped the trays! and Tom says:

"Why, Jubiter Dunlap, where'd YOU come from?"

Well, the man was astonished, of course; and first off he looked like he didn't know whether to be scared, or glad, or both, or which, but finally he settled down to being glad; and then his color come back, though at first his face had turned pretty white. So we got to talking together while he et his breakfast. And he says:

"But I aint Jubiter Dunlap. I'd just as soon tell you who I am, though,if you'll swear to keep mum, for I ain't no Phillips, either."

"We'll keep mum, but there ain't any need to tell who you are if you ain't Jubiter Dunlap."

"Because if you ain't him you're t'other twin, Jake. You're the spit'n image of Jubiter."

"Well, I'm Jake. But looky here, how do you come to know us Dunlaps?"

Tom told about the adventures we'd had down there at his uncle Silas's last summer, and when he see that there warn't anything about his folks--or him either, for that matter--that we didn't know, he opened out and talked perfectly free and candid. He never made any bones about his own case; said he'd been a hard lot, was a hard lot yet, and reckoned he'd be a hard lot plumb to the end. He said of course it was a dangerous life, and--He give a kind of gasp, and set his head like a person that's listening. We didn't say anything, and so it was verystill for a second or so, and there warn't no sounds but the screaking of the woodwork and the chug-chugging of the machinery down below.

Then we got him comfortable again, telling him about his people, and howBrace's wife had been dead three years, and Brace wanted to marry Benny and she shook him, and Jubiter was working for Uncle Silas, and him andUncle Silas quarreling all the time--and then he let go and laughed.

"Land!" he says, "it's like old times to hear all this tittle-tattle, and does me good. It's been seven years and more since I heard any. How do they talk about me these days?"

"Why, they don't talk about you at all--at least only just a mention,once in a long time."

"Because they think you are dead long ago."

"No! Are you speaking true?--honor bright, now." He jumped up, excited.

"Honor bright. There ain't anybody thinks you are alive."

"Then I'm saved, I'm saved, sure! I'll go home. They'll hide me and save my life. You keep mum. Swear you'll keep mum--swear you'll never, never tell on me. Oh, boys, be good to a poor devil that's being hunted day and night, and dasn't show his face! I've never done you any harm; I'll never do you any, as God is in the heavens; swear you'll be good to meand help me save my life."

We'd a swore it if he'd been a dog; and so we done it. Well, he couldn'tlove us enough for it or be grateful enough, poor cuss; it was all he could do to keep from hugging us.

We talked along, and he got out a little hand-bag and begun to open it,and told us to turn our backs. We done it, and when he told us to turn again he was perfectly different to what he was before. He had on blue goggles and the naturalest-looking long brown whiskers and mustashes you ever see. His own mother wouldn't 'a' knowed him. He asked us if he looked like his brother Jubiter, now.

"No," Tom said; "there ain't anything left that's like him except the long hair."

"All right, I'll get that cropped close to my head before I get there;then him and Brace will keep my secret, and I'll live with them as being a stranger, and the neighbors won't ever guess me out. What do you think?"

Tom he studied awhile, then he says:

"Well, of course me and Huck are going to keep mum there, but if you don't keep mum yourself there's going to be a little bit of a risk--it ain't much, maybe, but it's a little. I mean, if you talk, won't people notice that your voice is just like Jubiter's; and mightn't it make them think of the twin they reckoned was dead, but maybe after all was hid all this time under another name?"

"By George," he says, "you're a sharp one! You're perfectly right. I've got to play deef and dumb when there's a neighbor around. If I'd a struck for home and forgot that little detail--However, I wasn't striking for home. I was breaking for any place where I could get away from these fellows that are after me; then I was going to put on this disguise and get some different clothes, and--"

He jumped for the outside door and laid his ear against it and listened,pale and kind of panting. Presently he whispers:

"Sounded like cocking a gun! Lord, what a life to lead!"

Then he sunk down in a chair all limp and sick like, and wiped the sweat off of his face.