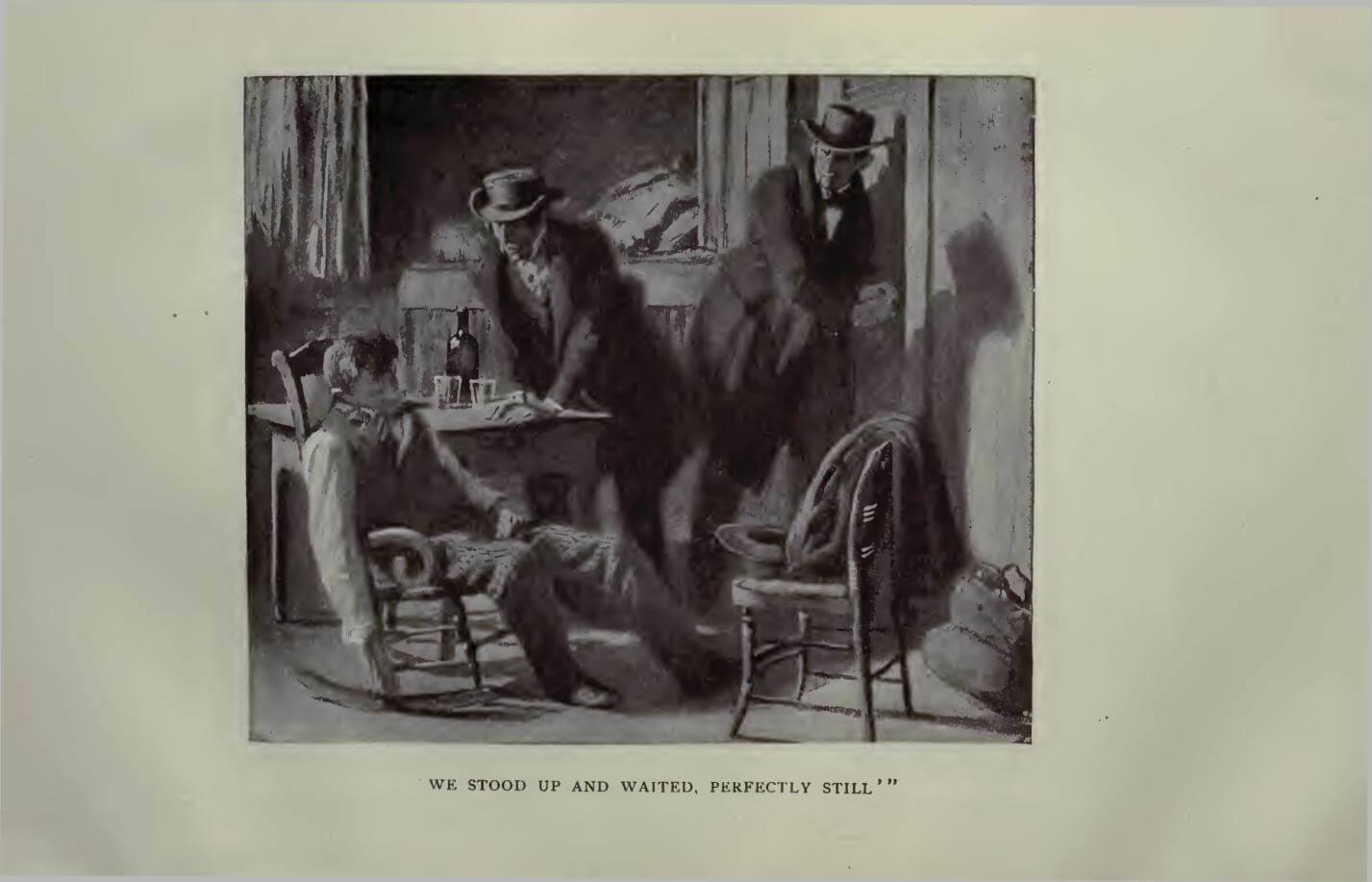 FROM that time out, we was with him 'most all the time, and one ort' other of us slept in his upper berth. He said he had been so lonesome,and it was such a comfort to him to have company, and somebody to talk toin his troubles. We was in a sweat to find out what his secret was, butTom said the best way was not to seem anxious, then likely he would drop into it himself in one of his talks, but if we got to asking questions he would get suspicious and shet up his shell. It turned out just so. It warn't no trouble to see that he WANTED to talk about it, but always along at first he would scare away from it when he got on the very edge of it, and go to talking about something else. The way it come about wasthis: He got to asking us, kind of indifferent like, about the passengers down on deck. We told him about them. But he warn't satisfied; we warn't particular enough. He told us to describe them better. Tom done it. At last, when Tom was describing one of the roughest and raggedest ones, he gave a shiver and a gasp and says:

"Oh, lordy, that's one of them! They're aboard sure--I just knowed it.I sort of hoped I had got away, but I never believed it. Go on."

Presently when Tom was describing another mangy, rough deck passenger, hegive that shiver again and says:

"That's him!--that's the other one. If it would only come a good blackstormy night and I could get ashore. You see, they've got spies on me.They've got a right to come up and buy drinks at the bar yonder forrard,and they take that chance to bribe somebody to keep watch on me--porteror boots or somebody. If I was to slip ashore without anybody seeing me,they would know it inside of an hour."

So then he got to wandering along, and pretty soon, sure enough, he wastelling! He was poking along through his ups and downs, and when he cometo that place he went right along. He says:

"It was a confidence game. We played it on a julery-shop in St. Louis.What we was after was a couple of noble big di'monds as big ashazel-nuts, which everybody was running to see. We was dressed up fine,and we played it on them in broad daylight. We ordered the di'monds sentto the hotel for us to see if we wanted to buy, and when we was examiningthem we had paste counterfeits all ready, and THEM was the things thatwent back to the shop when we said the water wasn't quite fine enough fortwelve thousand dollars."

"Twelve-thousand-dollars!" Tom says. "Was they really worth all thatmoney, do you reckon?"

"And you fellows got away with them?"

"As easy as nothing. I don't reckon the julery people know they've beenrobbed yet. But it wouldn't be good sense to stay around St. Louis, ofcourse, so we considered where we'd go. One was for going one way, oneanother, so we throwed up, heads or tails, and the Upper Mississippi won.We done up the di'monds in a paper and put our names on it and put it inthe keep of the hotel clerk, and told him not to ever let either of ushave it again without the others was on hand to see it done; then we wentdown town, each by his own self--because I reckon maybe we all had thesame notion. I don't know for certain, but I reckon maybe we had."

"To rob the others."

"What--one take everything, after all of you had helped to get it?"

It disgusted Tom Sawyer, and he said it was the orneriest, low-downestthing he ever heard of. But Jake Dunlap said it warn't unusual in theprofession. Said when a person was in that line of business he'd got tolook out for his own intrust, there warn't nobody else going to do it forhim. And then he went on. He says:

"You see, the trouble was, you couldn't divide up two di'monds amongstthree. If there'd been three--But never mind about that, there warn'tthree. I loafed along the back streets studying and studying. And Isays to myself, I'll hog them di'monds the first chance I get, and I'llhave a disguise all ready, and I'll give the boys the slip, and when I'msafe away I'll put it on, and then let them find me if they can. So Igot the false whiskers and the goggles and this countrified suit ofclothes, and fetched them along back in a hand-bag; and when I waspassing a shop where they sell all sorts of things, I got a glimpse ofone of my pals through the window. It was Bud Dixon. I was glad, youbet. I says to myself, I'll see what he buys. So I kept shady, andwatched. Now what do you reckon it was he bought?"

"Oh, keep still, Huck Finn, can't you, you're only just hendering all youcan. What WAS it he bought, Jake?"

"Well, I declare! What did he want with that?"

"That's what I thought. It was curious. It clean stumped me. I says tomyself, what can he want with that thing? Well, when he come out I stoodback out of sight, and then tracked him to a second-hand slop-shop andsee him buy a red flannel shirt and some old ragged clothes--just theones he's got on now, as you've described. Then I went down to the wharfand hid my things aboard the up-river boat that we had picked out, andthen started back and had another streak of luck. I seen our other pallay in HIS stock of old rusty second-handers. We got the di'monds andwent aboard the boat.

"But now we was up a stump, for we couldn't go to bed. We had to set upand watch one another. Pity, that was; pity to put that kind of a strainon us, because there was bad blood between us from a couple of weeksback, and we was only friends in the way of business. Bad anyway, seeingthere was only two di'monds betwixt three men. First we had supper, andthen tramped up and down the deck together smoking till most midnight;then we went and set down in my stateroom and locked the doors and lookedin the piece of paper to see if the di'monds was all right, then laid iton the lower berth right in full sight; and there we set, and set, andby-and-by it got to be dreadful hard to keep awake. At last Bud Dixon hedropped off. As soon as he was snoring a good regular gait that waslikely to last, and had his chin on his breast and looked permanent, HalClayton nodded towards the di'monds and then towards the outside door,and I understood. I reached and got the paper, and then we stood up andwaited perfectly still; Bud never stirred; I turned the key of theoutside door very soft and slow, then turned the knob the same way, andwe went tiptoeing out onto the guard, and shut the door very soft andgentle.

"There warn't nobody stirring anywhere, and the boat was slipping along,swift and steady, through the big water in the smoky moonlight. We neversaid a word, but went straight up onto the hurricane-deck and plumb backaft, and set down on the end of the sky-light. Both of us knowed whatthat meant, without having to explain to one another. Bud Dixon wouldwake up and miss the swag, and would come straight for us, for he ain'tafeard of anything or anybody, that man ain't. He would come, and wewould heave him overboard, or get killed trying. It made me shiver,because I ain't as brave as some people, but if I showed the whitefeather--well, I knowed better than do that. I kind of hoped the boatwould land somers, and we could skip ashore and not have to run the riskof this row, I was so scared of Bud Dixon, but she was an upper-river tuband there warn't no real chance of that.

"Well, the time strung along and along, and that fellow never come! Why,it strung along till dawn begun to break, and still he never come.'Thunder,' I says, 'what do you make out of this?--ain't it suspicious?''Land!' Hal says, 'do you reckon he's playing us?--open the paper!' Idone it, and by gracious there warn't anything in it but a couple oflittle pieces of loaf-sugar! THAT'S the reason he could set there andsnooze all night so comfortable. Smart? Well, I reckon! He had had themtwo papers all fixed and ready, and he had put one of them in place oft'other right under our noses.

"We felt pretty cheap. But the thing to do, straight off, was to make aplan; and we done it. We would do up the paper again, just as it was,and slip in, very elaborate and soft, and lay it on the bunk again, andlet on WE didn't know about any trick, and hadn't any idea he wasa-laughing at us behind them bogus snores of his'n; and we would stick byhim, and the first night we was ashore we would get him drunk and searchhim, and get the di'monds; and DO for him, too, if it warn't too risky.If we got the swag, we'd GOT to do for him, or he would hunt us down anddo for us, sure. But I didn't have no real hope. I knowed we could gethim drunk--he was always ready for that--but what's the good of it? Youmight search him a year and never find--Well, right there I catched mybreath and broke off my thought! For an idea went ripping through my headthat tore my brains to rags--and land, but I felt gay and good! You see,I had had my boots off, to unswell my feet, and just then I took up oneof them to put it on, and I catched a glimpse of the heel-bottom, and itjust took my breath away. You remember about that puzzlesome littlescrewdriver?"

"Well, when I catched that glimpse of that boot heel, the idea that wentsmashing through my head was, I know where he's hid the di'monds! Youlook at this boot heel, now. See, it's bottomed with a steel plate, andthe plate is fastened on with little screws. Now there wasn't a screwabout that feller anywhere but in his boot heels; so, if he needed ascrewdriver, I reckoned I knowed why."

"Well, I got my boots on, and we went down and slipped in and laid thepaper of sugar on the berth, and sat down soft and sheepish and went tolistening to Bud Dixon snore. Hal Clayton dropped off pretty soon, but Ididn't; I wasn't ever so wide awake in my life. I was spying out fromunder the shade of my hat brim, searching the floor for leather. It tookme a long time, and I begun to think maybe my guess was wrong, but atlast I struck it. It laid over by the bulkhead, and was nearly the colorof the carpet. It was a little round plug about as thick as the end ofyour little finger, and I says to myself there's a di'mond in the nestyou've come from. Before long I spied out the plug's mate.

"Think of the smartness and coolness of that blatherskite! He put up thatscheme on us and reasoned out what we would do, and we went ahead anddone it perfectly exact, like a couple of pudd'nheads. He set there andtook his own time to unscrew his heelplates and cut out his plugs andstick in the di'monds and screw on his plates again. He allowed we wouldsteal the bogus swag and wait all night for him to come up and getdrownded, and by George it's just what we done! I think it was powerfulsmart."

"You bet your life it was!" says Tom, just full of admiration.