PLANS TO SECURE THE DIAMONDS 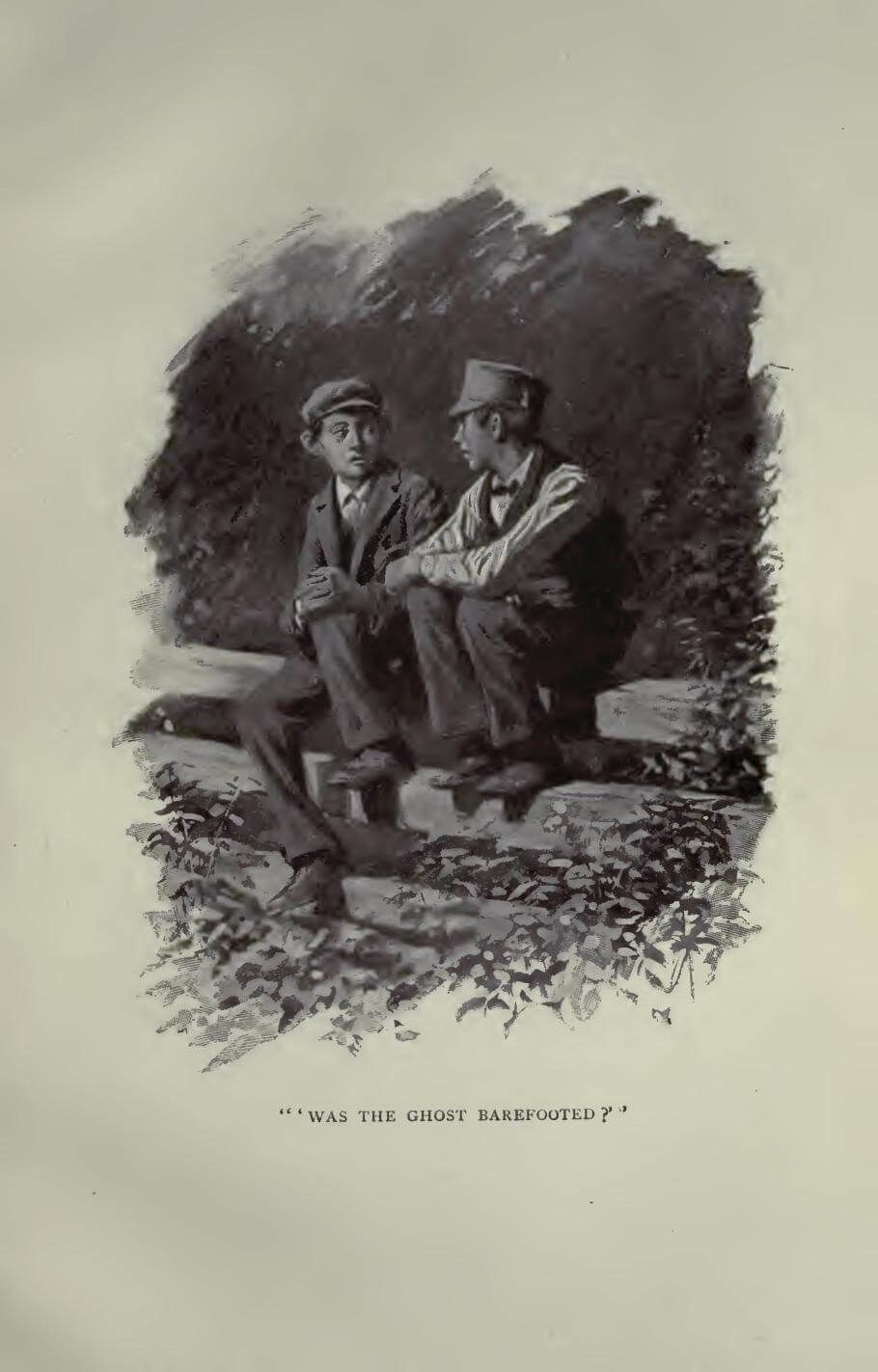 WE tramped along behind Jim and Lem till we come to the back stile where old Jim's cabin was that he was captivated in, the time we set him free,and here come the dogs piling around us to say howdy, and there was the lights of the house, too; so we warn't afeard any more, and was going to climb over, but Tom says:

"Hold on; set down here a minute. By George!"

"Matter enough!" he says. "Wasn't you expecting we would be the first totell the family who it is that's been killed yonder in the sycamores, and all about them rapscallions that done it, and about the di'monds they've smouched off of the corpse, and paint it up fine, and have the glory of being the ones that knows a lot more about it than anybody else?"

"Why, of course. It wouldn't be you, Tom Sawyer, if you was to let sucha chance go by. I reckon it ain't going to suffer none for lack ofpaint," I says, "when you start in to scollop the facts."

I was astonished to hear him talk so. I says:

"You wait--I'll show you what. Did it have its boots on?"

"Means that them thieves DIDN'T GET THE DI'MONDS."

"Jimminy! What makes you think that?"

"I don't only think it, I know it. Didn't the breeches and goggles andwhiskers and hand-bag and every blessed thing turn to ghost-stuff?Everything it had on turned, didn't it? It shows that the reason itsboots turned too was because it still had them on after it started to goha'nting around, and if that ain't proof that them blatherskites didn'tget the boots, I'd like to know what you'd CALL proof."

Think of that now. I never see such a head as that boy had. Why, I hadeyes and I could see things, but they never meant nothing to me. But TomSawyer was different. When Tom Sawyer seen a thing it just got up on itshind legs and TALKED to him--told him everything it knowed. I never seesuch a head.

"Tom Sawyer," I says, "I'll say it again as I've said it a many a timebefore: I ain't fitten to black your boots. But that's all right--that'sneither here nor there. God Almighty made us all, and some He gives eyesthat's blind, and some He gives eyes that can see, and I reckon it ain'tnone of our lookout what He done it for; it's all right, or He'd 'a'fixed it some other way. Go on--I see plenty plain enough, now, that themthieves didn't get way with the di'monds. Why didn't they, do youreckon?"

"Because they got chased away by them other two men before they couldpull the boots off of the corpse."

"Oh, shucks, Huck Finn, can't you see? Look at it. What's a-going tohappen? There's going to be an inquest in the morning. Them two men willtell how they heard the yells and rushed there just in time to not savethe stranger. Then the jury'll twaddle and twaddle and twaddle, andfinally they'll fetch in a verdict that he got shot or stuck or bustedover the head with something, and come to his death by the inspiration ofGod. And after they've buried him they'll auction off his things for topay the expenses, and then's OUR chance." "How, Tom?"

"Buy the boots for two dollars!"

Well, it 'most took my breath.

"You bet. Some day there'll be a big reward offered for them--a thousanddollars, sure. That's our money! Now we'll trot in and see the folks.And mind you we don't know anything about any murder, or any di'monds, orany thieves--don't you forget that."

I had to sigh a little over the way he had got it fixed. I'd 'a' SOLDthem di'monds--yes, sir--for twelve thousand dollars; but I didn't sayanything. It wouldn't done any good. I says:

"But what are we going to tell your aunt Sally has made us so longgetting down here from the village, Tom?"

"Oh, I'll leave that to you," he says. "I reckon you can explain itsomehow."

He was always just that strict and delicate. He never would tell a liehimself.

We struck across the big yard, noticing this, that, and t'other thingthat was so familiar, and we so glad to see it again, and when we got tothe roofed big passageway betwixt the double log house and the kitchenpart, there was everything hanging on the wall just as it used to was,even to Uncle Silas's old faded green baize working-gown with the hood toit, and raggedy white patch between the shoulders that always looked likesomebody had hit him with a snowball; and then we lifted the latch andwalked in. Aunt Sally she was just a-ripping and a-tearing around, andthe children was huddled in one corner, and the old man he was huddled inthe other and praying for help in time of need. She jumped for us withjoy and tears running down her face and give us a whacking box on theear, and then hugged us and kissed us and boxed us again, and justcouldn't seem to get enough of it, she was so glad to see us; and shesays:

"Where HAVE you been a-loafing to, you good-for-nothing trash! I've beenthat worried about you I didn't know what to do. Your traps has beenhere ever so long, and I've had supper cooked fresh about four times soas to have it hot and good when you come, till at last my patience isjust plumb wore out, and I declare I--I--why I could skin you alive! Youmust be starving, poor things!--set down, set down, everybody; don't loseno more time."

It was good to be there again behind all that noble corn-pone andspareribs, and everything that you could ever want in this world. OldUncle Silas he peeled off one of his bulliest old-time blessings, with asmany layers to it as an onion, and whilst the angels was hauling in theslack of it I was trying to study up what to say about what kept us solong. When our plates was all loadened and we'd got a-going, she askedme, and I says:

"Huck Finn! Since when am I Mizzes to you? Have I ever been stingy ofcuffs or kisses for you since the day you stood in this room and I tookyou for Tom Sawyer and blessed God for sending you to me, though you toldme four thousand lies and I believed every one of them like a simpleton?Call me Aunt Sally--like you always done."

"Well, me and Tom allowed we would come along afoot and take a smell ofthe woods, and we run across Lem Beebe and Jim Lane, and they asked us togo with them blackberrying to-night, and said they could borrow JubiterDunlap's dog, because he had told them just that minute--"

"Where did they see him?" says the old man; and when I looked up to seehow HE come to take an intrust in a little thing like that, his eyes wasjust burning into me, he was that eager. It surprised me so it kind ofthrowed me off, but I pulled myself together again and says:

"It was when he was spading up some ground along with you, towardssundown or along there."

He only said, "Um," in a kind of a disappointed way, and didn't take nomore intrust. So I went on. I says:

"That'll do, you needn't go no furder." It was Aunt Sally. She was boringright into me with her eyes, and very indignant. "Huck Finn," she says,"how'd them men come to talk about going a-black-berrying inSeptember--in THIS region?"

I see I had slipped up, and I couldn't say a word. She waited, stilla-gazing at me, then she says:

"And how'd they come to strike that idiot idea of going a-blackberryingin the night?"

"Oh, SHET up--do! Looky here; what was they going to do with a dog?--huntblackberries with it?"

"Now, Tom Sawyer, what kind of a lie are you fixing YOUR mouth tocontribit to this mess of rubbage? Speak out--and I warn you before youbegin, that I don't believe a word of it. You and Huck's been up tosomething you no business to--I know it perfectly well; I know you, BOTHof you. Now you explain that dog, and them blackberries, and the lantern,and the rest of that rot--and mind you talk as straight as a string--doyou hear?"

"It is a pity if Huck is to be talked to that way, just for making alittle bit of a mistake that anybody could make."

"What mistake has he made?"

"Why, only the mistake of saying blackberries when of course he meantstrawberries."

"Tom Sawyer, I lay if you aggravate me a little more, I'll--"

"Aunt Sally, without knowing it--and of course without intending it--youare in the wrong. If you'd 'a' studied natural history the way youought, you would know that all over the world except just here inArkansaw they ALWAYS hunt strawberries with a dog--and a lantern--"

But she busted in on him there and just piled into him and snowed himunder. She was so mad she couldn't get the words out fast enough, andshe gushed them out in one everlasting freshet. That was what Tom Sawyerwas after. He allowed to work her up and get her started and then leaveher alone and let her burn herself out. Then she would be so aggravatedwith that subject that she wouldn't say another word about it, nor letanybody else. Well, it happened just so. When she was tuckered out andhad to hold up, he says, quite ca'm:

So we was perfectly safe, then, and didn't have no more trouble aboutthat delay. Tom done it elegant.