Roughing It is Twain's account of animal sightings in the desert beyond the Rocky Mountains, excerpted from his adventure novel, Roughing It. Retrieved from the anthology, The Humour of America (1909).

ANOTHER night of alternate tranquillity and turmoil. But morning came by-and-by. It was another glad awakening to fresh breezes, vast expanses of level greensward, bright sunlight, an impressive solitude utterly without visible human beings or human habitations, and an atmosphere of such amazing magnifying properties that trees that seemed close at hand were more than three miles away. We resumed undress uniform, climbed a-top of the flying coach, dangled our legs over the side, shouted occasionally at our frantic mules, merely to see them lay their ears back and scamper faster, tied our hats on to keep our hair from blowing away, and levelled an outlook over the world-wide carpet about us for things new and strange to gaze at. Even at this day it thrills me through and through to think of the life, the gladness and the wild sense of freedom, that used to make the blood dance in my veins on those fine overland mornings! 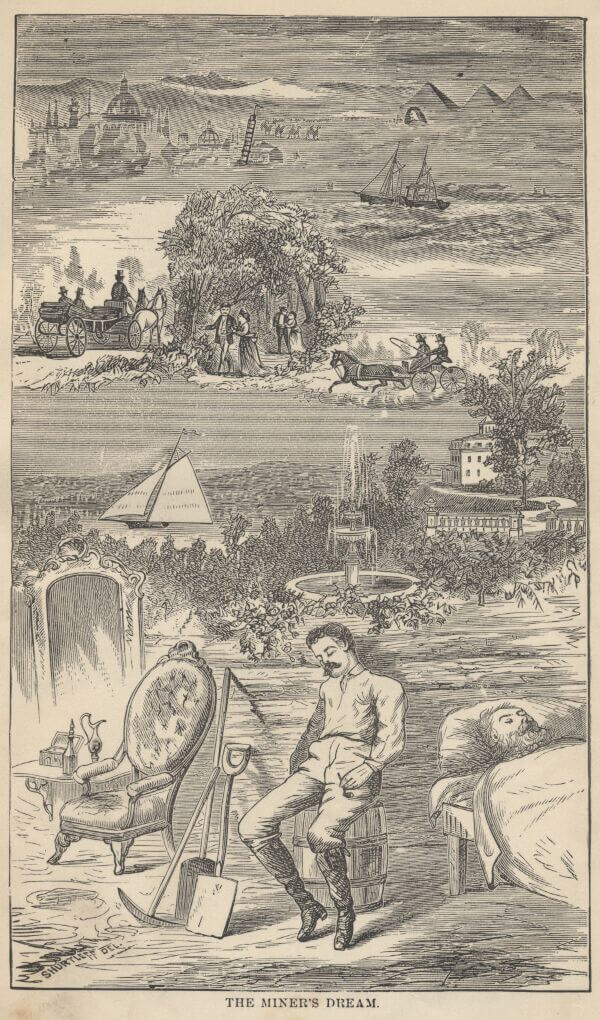 Along about an hour after breakfast we saw the first prairie-dog villages, the first antelope, and the first wolf. If I remember rightly, this latter was the regular cayote (pronounced ky-o-te) of the farther deserts. And if it was, he was not a pretty creature or respectable either, for I got well acquainted with his race afterward, and can speak with confidence. The cayote is a long, slim, sick- and sorry-looking skeleton, with a grey wolf-skin stretched over it, a tolerably bushy tail that for ever sags down with a despairing expression of forsakenness and misery, a furtive and evil eye, and a long, sharp face, with slightly lifted lip and exposed teeth. He has a general slinking expression all over. The cayote is a living, breathing allegory of want. He is always hungry. He is always poor, out of luck, and friendless. The meanest creatures despise him, and even the fleas would desert him for a velocipede. He is so spiritless and cowardly that even while his exposed teeth are pretending a threat, the rest of his face is apologising for it. And he is so homely!—so scrawny, and ribby, and coarse-haired, and pitiful. When he sees you he lifts his lip and lets a flash of his teeth out, and then turns a little out of the course he was pursuing, depresses his head a bit, and strikes a long, soft-footed trot through the sage-brush, glancing over his shoulder at you, from time to time, till he is about out of easy pistol range, and then he stops and takes a deliberate survey of you; he will trot fifty yards and stop again—another fifty and stop again; and finally the grey of his gliding body blends with the grey of the sagebrush, and he disappears. All this is when you make no demonstration against him; but if you do, he develops a livelier interest in his journey, and instantly electrifies his heels, and puts such a deal of real estate between himself and your weapon that by the time you have raised the hammer you see that you need a minié rifle, and by the time you have got him in line you need a rifled cannon, and by the time you have “drawn a bead” on him you see well enough that nothing but an unusually long-winded streak of lightning could reach him where he is now. But if you start a swift-footed dog after him, you will enjoy it ever so much—especially if it is a dog that has a good opinion of himself, and has been brought up to think he knows something about speed. The cayote will go swinging gently off on that deceitful trot of his, and every little while he will smile a fraudful smile over his shoulder that will fill that dog entirely full of encouragement and worldly ambition, and make him lay his head still lower to the ground, and stretch his neck further to the front, and pant more fiercely, and stick his tail out straighter behind, and move his furious legs with a yet wilder frenzy, and leave a broader and broader, and higher and denser cloud of desert sand smoking behind, and marking his long wake across the level plain! And all this time the dog is only a short twenty feet behind the cayote, and to save the soul of him he cannot understand why it is that he cannot get perceptibly closer; and he begins to get aggravated, and it makes him madder and madder to see how gently the cayote glides along and never pants or sweats or ceases to smile; and he grows still more and more incensed to see how shamefully he has been taken in by an entire stranger, and what an ignoble swindle that long, calm, soft-footed trot is; and next he notices that he is getting fagged, and that the cayote actually has to slacken speed a little to keep from running away from him—and then that town-dog is mad in earnest, and he begins to strain and weep and swear, and paw the sand higher than ever, and reach for the cayote with concentrated and desperate energy. This “spurt” finds him six feet behind the gliding enemy, and two miles from his friends. And then, in the instant that a wild new hope is lighting up his face, the cayote turns and smiles blandly upon him once more, and with a something about it which seems to say: “Well, I shall have to tear myself away from you, bub—business is business, and it will not do for me to be fooling along this way all day”—and forthwith there is a rushing sound, and the sudden splitting of a long crack through the atmosphere, and behold that dog is solitary and alone in the midst of a vast solitude!

It makes his head swim. He stops and looks all around; climbs the nearest sand-mound, and gazes into the distance; shakes his head reflectively, and then, without a word, he turns and jogs along back to his train, and takes up a humble position under the hindmost waggon, and feels unspeakably mean, and looks ashamed, and hangs his tail at half-mast for a week. And forasmuch as a year after that, whenever there is a great hue and cry after a cayote, that 321dog will merely glance in that direction without emotion, and apparently observe to himself, “I believe I do not wish any of the pie.”

The cayote lives chiefly in the most desolate and forbidding deserts, along with the lizard, the jackass-rabbit, and the raven, and gets an uncertain and precarious living, and earns it. He seems to subsist almost wholly on the carcasses of oxen, mules, and horses that have dropped out of emigrant trains and died, and upon windfalls of carrion, and occasional legacies of offal bequeathed to him by white men who have been opulent enough to have something better to butcher than condemned army bacon. He will eat anything in the world that his first cousins, the desert-frequenting tribes of Indians, will, and they will eat anything they can bite. It is a curious fact that these latter are the only creatures known to history who will eat nitroglycerine and ask for more if they survive.

The cayote of the deserts beyond the Rocky Mountains has a peculiarly hard time of it, owing to the fact that his relations, the Indians, are just as apt to be the first to detect a seductive scent on the desert breeze, and follow the fragrance to the late ox it emanated from, as he is himself; and when this occurs he has to content himself with sitting off at a little distance watching those people strip off and dig out everything edible, and walk off with it. Then he and the waiting ravens explore the skeleton and polish the bones. It is considered that the cayote, and the obscene bird, and the Indian of the desert, testify their blood kinship with each other in that they live together in the waste places of the earth on terms of perfect confidence and friendship, while hating all other creatures and yearning to assist at their funerals. He does not mind going a hundred miles to breakfast, and a hundred and fifty to dinner, because he is sure to have three or four days between meals, and he can just as well be travelling and looking at the scenery as lying around doing nothing and adding to the burdens of his parents.

We soon learned to recognise the sharp, vicious bark of the cayote as it came across the murky plain at night to disturb our dreams among the mail-sacks; and remembering his forlorn aspect and his hard fortune, made shift to wish him the blessed novelty of a long day’s good luck and a limitless larder the morrow.

Enjoy Twain's novel, Roughing It, for adventures silver mining in Nevada to volcanic eruptions in Hawaii.

Add Roughing It to your library.

Return to the Mark Twain library , or . . . Read the next essay; Taming the Bicycle