Science in the Kitchen 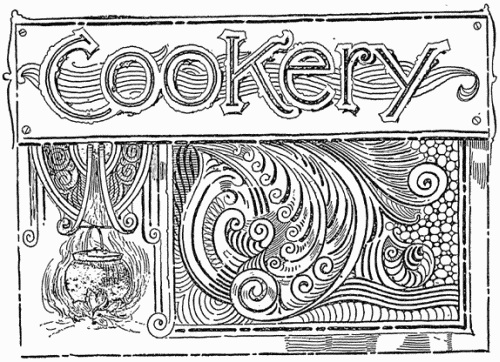 It is not enough that good and proper food material be provided; it must have such preparation as will increase and not diminish its alimentary value. The unwholesomeness of food is quite as often due to bad cookery as to improper selection of material. Proper cookery renders good food material more digestible. When scientifically done, cooking changes each of the food elements, with the exception of fats, in much the same manner as do the digestive juices, and at the same time it breaks up the food by dissolving the soluble portions, so that its elements are more readily acted upon by the digestive fluids. Cookery, however, often fails to attain the desired end; and the best material is rendered useless and unwholesome by a improper preparation.

It is rare to find a table, some portion of the food upon which is not rendered unwholesome either by improper preparatory treatment, or by the addition of some deleterious substance. This is doubtless due to the fact that the preparation of food being such a commonplace matter, its important relations to health, mind, and body have been overlooked, and it has been regarded as a menial service which might be undertaken with little or no preparation, and without attention to matters other than those which relate to the pleasure of the eye and the palate. With taste only as a criterion, it is so easy to disguise the results of careless and improper cookery of food by the use of flavors and condiments, as well as to palm off upon the digestive organs all sorts of inferior material, that poor cookery has come to be the rule rather than the exception.

Another reason for this prevalence of bad cookery, is to be found in the fact that in so many homes the cooking is intrusted to an ignorant class of persons having no knowledge whatever of the scientific principles involved in this most important and practical of arts. An ethical problem which we have been unable to solve is the fact that women who would never think of trusting the care of their fine china and bric-a-brac to unskilled hands, unhesitatingly intrust to persons who are almost wholly untrained, the preparation of their daily food. There is no department of life where superior intelligence is more needed than in the selection and preparation of food, upon which so largely depend the health and physical welfare of the family circle.

The evils of bad cookery and ill-selected food are manifold, so many, in fact, that it has been calculated that they far exceed the mischief arising from the use of strong drink; indeed, one of the evils of unwholesome food is its decided tendency to create a craving for intoxicants. Bad cookery causes indigestion, indigestion causes thirst, and thirst perpetuates drunkenness. Any one who has suffered from a fit of indigestion, and can recollect the accompanying headache and the lowness of spirits, varying in degree from dejection or ill-humor to the most extreme melancholy, until the intellectual faculties seemed dazed, and the moral feelings blunted, will hardly wonder that when such a condition becomes chronic, as is often the case from the use of improperly prepared food, the victim is easily led to resort to stimulants to drown depression and enliven the spirits.

A thorough practical knowledge of simple, wholesome cookery ought to form a part of the education of every young woman, whatever her station in life. No position in life is more responsible than that of the person who arranges the bills of fare and selects the food for the household; and what higher mission can one conceive than to intelligently prepare the wherewithal to make shoulders strong to bear life's burdens and heads clear to solve its intricate problems? what worthier work than to help in the building up of bodies into pure temples fit for guests of noble thoughts and high purposes? Surely, no one should undertake such important work without a knowledge of the principles involved.