Kitty of the Roses 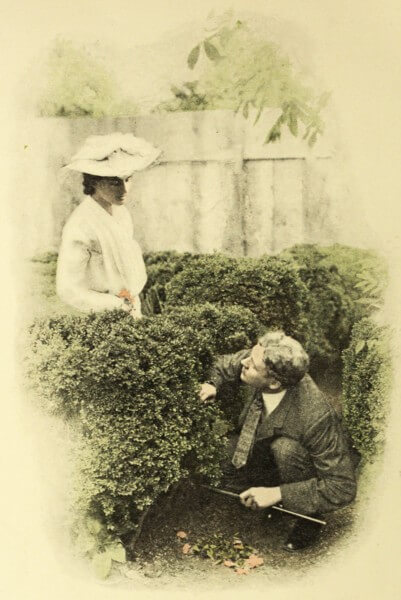 “I wonder,” mused Burton, “if it ever rained in the Garden of Eden. And, if it did, I wonder if Adam was as bored as I am now. Of course he, lucky beggar, had Eve, while I—my Garden of Eden is Eveless. Come to think of it, though,—” and he smiled for the first time since he had lifted his head from the pillow to see the rain streaming relentlessly from a leaden sky—“come to think of it Eve and I would cut rather sorry figures out there in that dripping Eden. She, of course, would wear a little gray rain coat and a felt hat, while I would have to appear in rubber coat and sou’wester. And we’d each have to wear rubbers and, perhaps, carry umbrellas. It doesn’t sound romantic. Not that Kitty of the Roses wouldn’t be absolutely charming in a raincoat, or that I am anything short of distinguished in that absurd garment of black rubber, only—well, it would test our tempers as well as our powers of entertainment to have to sit out there with our backs to a box hedge—probably quite well stocked with spiders and assorted bugs—for any length of time. It must be difficult to talk well when a raindrop is hanging from the end of your nose and your cheek is plastered with wet rose petals. I’m sure that at the end of half an hour Kitty would detest me cordially and I would—but no, my dear, I couldn’t detest you under any circumstances. If you’ll only make your appearance through that aggravating back door over there I’ll fly to your side and sit contentedly on the sharpest picket of the fence as long as you’ll stay in sight.”

“It isn’t as though I couldn’t see her if I wanted to take extreme measures,” he went on. “If I liked I could go this minute to the front door of the Castle and ask for her. She might refuse to speak to me when she discovered who I was, but, at least, I would have had the satisfaction of seeing her again.”

The thought seemed to bring him a degree of comfort, for his face, which since rising had been as cloudy as the sky, lighted somewhat, and he blew cigarette smoke out into the rain with new gusto.

“But she wouldn’t like it; not a bit of it. And so I’ll worry through this beast of a day as well as I can, and to-morrow—to-morrow the sun will shine again, those sorry-looking flowers will raise their heads once more and Kitty, Kitty of the Roses, will snip them off with her shears. Happy, thrice blessed flowers!”

Suddenly his countenance fell again and his cigarette dangled disconsolately from drooping lips.

“I wonder though if she’ll put in an appearance to-morrow! Perhaps she thought me impertinent, a bit of a bounder! Perhaps she’ll keep out of my way! Perhaps—but she can’t do that altogether, else what would become of the roses? She must come into the garden, and if she comes into the garden I shall see her. And I’ll behave very, very well, oh, perfectly! And she’ll say to herself, ‘Poor fellow, his manners are really quite nice—for a Northerner. And he seems rather harmless. I think I’ll be kind to him.’ And everything will be lovely!”

Cheered by his prophecies, he drew the table as near to the open window as the spattering raindrops permitted and resolutely took up his pen. For the first half-hour his gaze was more often on the door of the neighboring house than on his task. But after that the work—a paper on “Early Colonial Architecture in the South” to be read at a meeting of the Society of Architects—progressed finely, while the rain beat ceaselessly upon trees and shrubs and pat, pattered on the window-sill at his elbow.

By bedtime he had written the final word. After he had blown out his lamp he went to the window overlooking the Enchanted Garden. The back of the Castle was in darkness, but the rain had ceased, the dripping roses were scenting the night with their perfume and, high overhead, the moon peeped wanly through a rift in the clouds.